It was raining this morning. The weather from the west had finally arrived and the weather radar showed most of New England under a mass of green.

We were some of the early ones in the small dining room and joined Brad and Judy, who were already there. The full breakfast was excellent. I had a carnivore omelet (three kinds of meat) and Sandy had blueberry pancakes.

The ride, organized by Keith Koehler, was supposed to leave at 9:30 and, according to reports from those who were there, it did. Only two bikes from the Suds, Keith's and Brad's, went. The other few came from the other hotel people were staying at. Joe said this was the first time he could remember the ride being rained out. Didn't matter to me since, with the suspension problems, I wasn't going anyway. 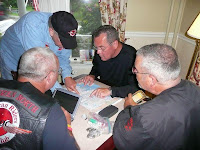 With most of the people not riding, there were a lot of people to hang out with. At one point,Ol' Phart and Lost Bob were working on their trip planning and we ended up having an ad hoc GPS seminar in the lobby of the Suds. Here, Ol' Phart and I make use of high technology while Snappa tries to explain to Lost Bob how not to get lost using the GPM. U-Turn and Steve Cifra both had new Zumos so we did some note comparing. 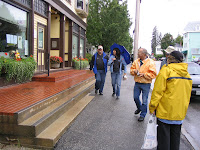 The annual Chowder Festival was going on up at the park. Normally we don't make this because we are out riding, but this year we were a captive audience. We walked trough the rain up to the park and tried a few things and talked to some crafts people exhibiting their wares. The line to try the chowder was too long, so we had whoopie pies instead. Here, Bobcat Pease, his wife Jewel with the umbrella, and Sherm in his spiffy orange Frogg Togg jacket, walk down Main Street in Bethel.

After we worked our way back to the Suds, we found that our Inn had won the chowder competition. They took both the Judges' Choice and the Peoples' Choice. No surprise to anyone who has ever eaten here. Sandy and Sherm were napping, and soon I was overcome with the urge to get horizontal for a while.

We were in the first group seated for dinner. Many had the duck, but I opted for veal Oscar since I have a real liking for Bearnaise sauce. In fact, I ended up with it all over my shirt. Again, check Sherm's Blog for a complete culinary photo spread. The cheesecake I had for dessert was one of the best I ever had.

After supper, I sat out on the porch and had my last cigarette. That's right, my LAST CIGARETTE. I've been taking Champix for ten days and this was the day I had picked to end my habit. I didn't even smoke the last ones in the pack, opting to go to bed early since we had a long way to go in the morning.
Posted by Jim "Skid" Robinson on 9/15/2007