Today, Phase II of the fall tour began. Bethel Maine next weekend and Eureka Springs Arkansas the next. It was 8C this morning (about 47F), but it wasn't raining and both the sky and the weather channel indicated it wouldn't. Normie suggested he might go with us, but had to cancel due to problems at work. We were loaded and rolling by 8:00 AM.

Rather than take the direct route down Highway 17, I opted for the scenic ride. We went south on Hwy 69 with a stop at the French River Visitor Centre. That was closed until 9:30 AM, if you can believe it. Then it was on to Parry Sound. At Mill Lake, on the south side of the Parry Sound construction zone, traffic came to a halt just before the four-lane started. When we finally got down there, we saw that some tourist must have stopped to look at the moose standing in the water by the lake shore.

At the Parry Sound Mickey D's, we got in just as a Christian Tours bus was disgorging its passengers. Fortunately, they were older and headed for the bathroom first, so we got served in short order. Then we headed south and caught Hwy 141 east, one of my favourite roads. Unfortunately, just as we got to the best curves from Bent River to Ullswater, we came up on a slow car we couldn't pass. He pulled off just as the best curves ended. 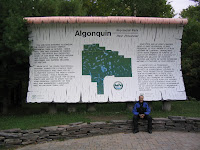 When 141 got to Hwy 11, we went north to Huntsville and then east on 60 towards Algonquin Park. Sherm posed in front of the sign at the West Gate. There were more colours here in the leaves than anywhere else we had been, but they were still only a promise of the splendour that would be visible in a couple of more weeks. The park was quiet and we crossed without incident. No moose, either, but we did see the one at Parry Sound. The paving east of Barry's Bay is largely complete and they did a fine job. 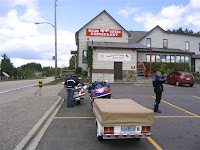 We stopped at the Wilno Tavern in the first Polish community in Canada. They specialize in Polish dishes and was the reason Normie wanted to come with us. For all the times I have been by here, I have never stopped in so this was a first for me. We had varying combinations of pierogi, cabbage rolls and Polish sausage. 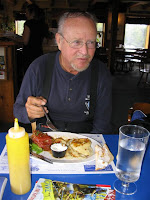 Sherm enjoyed his but said that next time he would skip the cabbage rolls and have more pierogi.

Well fed, we continued on 60 to Renfrew. As we came into town, we passed the Rocky Mountain House Motel, a nice looking place, but I didn't see it in time. There were no more places as we went through town and out to Hwy 17, so I opted to continue to Arnprior. One place I missed, the next was seedy, the next didn't exist any more and the Quality Inn wanted $140 for two double beds. OK, on to Ottawa. Everything in Kanata was full up and the Days Inn down the road wanted $140+. It was not quite 6:00 PM so, with heavy hearts, we continued on the 60 miles to Cornwall where we got a room at our usual Days Inn for a mere $90.

I wonder when the hotel operators will realize that the dollar is now $0.95, not $0.65, and that tourists won't choose to travel up here when things are so much more reasonable in the USA?

The bad part of the day came when we stopped. I had been fiddling with the rear shock (the Traxxion shock made by Penske and installed at great expense in May) settings for the last two hundred miles. It didn't feel right. Then, as I was coming through Ottawa, I could feel the springs bouncing as we hit dips. It felt to me like there was no damping. Sure enough, when I got down to check it, the bottom of the shock was wet with oil and it was dripping off the lower mount. We had obviously lost a seal and the shock wasn't damping anything. I'd have to call Traxxion in the morning and see what my options were, but with the bike still rideable (albeit bouncy), we would go on.

We had supper at the pseudo New Orleans restaurant next door and then turned in after Sherm blogged for quite a bit and I sat around in a shock induced funk. Tomorrow will be another day.
Posted by Jim "Skid" Robinson on 9/12/2007