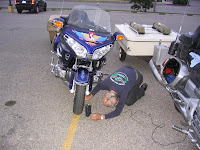 It was dry here this morning for a change, but the weather radar showed that some precipitation was inbound from the west. Our job today was to get north to the Soo before it got here. Sherm isn't praying to the Wing God here, he's using my small Airman compressor to adjust his tire inflation.

After continental breakfast, we headed north on I-75 under cloudy skies and, occasionally, through mist. A few leaves were changing colour, but not many. It was cool enough that Sherm and Sandy suited up right to the Gerbing electric jackets when we stopped in Indian River. The only problem was that Sherm left the cord with the thermostat controller in Oregon. He plugged directly into the harness with no control.

Crossing the Mackinac Bridge, there were no winds and we stayed in the paved lane the entire way. This was, without a doubt, the best crossing of the Big Mac I have ever had. Sherm wondered why we have complained about it all these years.

At the Soo, we crossed the International Bridge and found the booth open. No lines! The pretty young lady asked the usual questions, including my plate number (VROC), and then waved us through. Then Sherm pulled into the booth and told her the same plate. This confused her for a moment and then she asked if his was Michigan. Oregon, he told her. She still seemed doubtful. Too bad Brillo, Tomcat or one of the other VROC plates couldn't have been next. 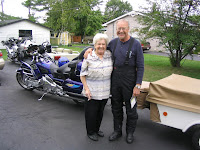 We dropped in to visit Mom for a while. I know she wasn't feeling her best but she didn't show it, as you can see in this picture with Sherm. She was just knocked out of first place in the VROC NASCAR Fantasy League, but we expect she will fight back and be on top again after the next race.

On the way to Sudbury, it rained lightly a few miles from Thessalon to Iron Bridge. We hit town at rush hour and fought traffic all the way across town. Since today was my birthday, my in-laws Harry and Jan took the three of us out to supper. I am now 55, an official senior citizen as far as the City of Greater Sudbury is concerned.

We turned in fairly early knowing we wouldn't have to ride tomorrow.
Posted by Jim "Skid" Robinson on 9/10/2007