It was overcast and damp when we woke up. The jeans hadn't dried out, and probably never would without the help of a dryer.

Sherm found a Golden Corral yesterday in Terre Haute and a few of us were up for their Saturday breakfast buffet. Unfortunately, Sandy and Carlene weren't, so we reverted to Plan B. I asked Stella to find restaurants and then blindly picked one in north Terre Haute called the Coffee Cup Family Restaurant. This was taking a big chance because one has no idea what quality the establishment might be or even whether it is still in operation. 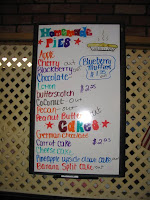 I knew the risks, but the other ten people on our breakfast runs trusted me, so I led the group up 46, west on US 40 and then down some streets in Terre Haute. We could see we weren't in the most affluent part of town and Sherm, Willie and I had a discussion on the CB's about what we might find. The apprehension was unwarranted when we got there. The place was packed and two of TH's finest were eating there too, always a good sign. There was a table for eight and four people at an adjacent table offered to move so we could put their table with ours and accommodate everyone. The staff were friendly and very competent, the food was good and very reasonably priced and, as you can see from the photo, they have pie. Score one for Stella. If you are reading this, Chunk, you missed this one:-) 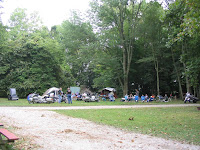 We headed back to the KOA via US 41 and I-70. Along 41, they have a spectacular courthouse and war memorial but you can't just pull over and take pictures when you are leading a group. Back at the KOA, one of the staff told us that the ANG F-16's were relocating to Fort Wayne and today was their last flight day. They had invited dignitaries and retirees to visit the field and four jets took off and did some demo flying for them. We watched and sat around and swapped stories, little knowing that our day was about to change drastically. 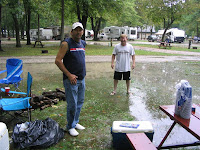 The first indication of trouble came after many of the group went out for lunch. Sandy and I stayed and she asked me to go out to Arby's and get her some food. As I left, it started spitting rain, although it didn't get too bad before I got back. Soon after, it started raining with a vengeance and the wind came up as well. Several people sat around the picnic table under our awning as the storm raged, lightning flashed and thunder crashed. The low lying areas quickly flooded. When it finally stopped, we got a picture of Phin standing where our fire circle was. 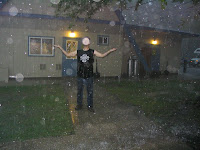 We had to be very careful walking around so our feet wouldn't get soaked. We decided to move to the shelter behind the office and Sandy and some of the others made use of the time to do laundry. Before long, it was pouring again. In the picture, Batman (already soaked to the skin) enjoyed the liquid sunshine. It let up before dark and we all kicked in and ordered Papa John's pizza (delivered) for supper.

We found that we could get the NASCAR race in the breakfast lounge, so the fans settled in front of the TV about 7:30. Others started a poker game in the shelter, although they played for imaginary money. When office closing time rolled around about 10:00, everyone walked gingerly back to their tents and camper (and cars if their gear was soaked). No fire tonight.

About 11:30, hard rain started again. I checked the weather radar and this one was huge. It covered Illinois and Indiana, with no sign of abating soon. With nothing to do about it but watch the water ride higher, I went to bed thanking my lucky starts that our trailer has an above ground hard floor.
Posted by Jim "Skid" Robinson on 9/08/2007