The Bounce Is Gone

Traxxion opened at 9:00 AM and, even tough I wanted to be there early, it was only 30 minutes away so we got a leisurely start to the day. The continental breakfast counter was out of milk and there was no desk clerk around. As we were leaving, Sandy saw him dozing in a back room.

Rather than go cross country to Woodstock, we followed Stella's advice and went 19 miles south on I-75. I was surprised by how well the traffic was flowing considering that this is a major route into Atlanta and it was just after 8:00 AM. That came to an end at exit 273 when everything ground to a halt. Luckily, we were getting off at 271 to cross over and catch the northbound I-575 to Woodstock, so we were only mildly inconvenienced. 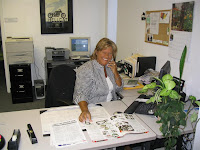 We rolled into the Traxxion parking lot at 8:30. Karen, the administrator type, arrived a few minutes later and opened the place up. She showed Sandy how the coffee maker worked, where the cold drinks were and generally made us feel right at home. Here she is at her usual location in the office. 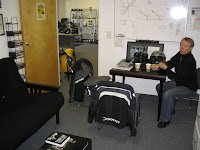 The break room/lounge had been changed around, with a couch replacing the long table. WiFi, a TV and a selection of DVD's were provided to keep the customers amused. Sandy is settled in for the wait in the photo.

Mike showed up before 9:00 and the bike was taken directly in. I did some blogging, checked the newsgroup and caught up on mail. The bike was finished just before noon and Mike said it would be no charge. The seal had failed and, after rebuilding it, the put a 'shock sock' on it to protect the shaft from a build-up of damaging crud. Thanks to Mike and Karen for making our visit a pleasant one.

I did have a talk with Mike about shock dynamics. Damping is easy to understand, but the pre-load adjustment still baffles me, even after the talk. In my mind, the spring shouldn't get stiffer because it should remain the same length, but I know from experience that is wrong. I guess I need to get a shock and play with it. Anyway, we ran at a 10 setting before and I was up to 21 without the damper. The spring moved through its full range without bottoming at this setting, given our loaded weight. I left Traxxion with the suspension set on 15. This absorbed the big bumps but we felt every road ripple and the bike was very touchy to steer. Oh well, experimentation is the only way we really learn.

Slammer called as we were getting ready to leave to tell us he and Toby were in Cleveland Tennessee and were aiming for Winchester or slightly west today. I told him we'd head for Winchester and I'd call him from there. We headed north on I-575. At one point, we were in a single lane construction area with the right lane blocked with cones. I heard a bang behind me and saw a green car swerve into my lane inches off my back fender. I don't know what the driver was thinking, but it looks like he had mowed down some cones before realizing that the lane was closed. Perhaps Happy Hour starts early here. Anyway, the car slowed right down until the end of the single lane, so I didn't have to worry about getting hit after that.

As I-575 ended, we headed west on Ga 53, a fine road that twisted and wound through the rolling countryside. WE were stopped at one point by a flagman and, playing sitting duck, I started to take evasive action because I didn't think a Buick coming up behind me was going to stop. He did, but barely. Maybe he was related to the driver of the green car.

We stopped for lunch in Calhoun, Georgia on I-75. Sandy's brother, Malcolm, called to tell us about his talks with her parents, not knowing she had talked to them last night. Jan had an angiogram Monday, but there was still some discrepancy about the next course of action.

We followed I-75 north to Chattanooga and caught I-24 west, dipping back into Georgia briefly and then ascending to the town of Monteagle. I have heard EZ and Scooter talk about Monteagle Mountain, now I know where it is. In Monteagle, we got off I-24 and took US 41 (Alt), aka the David Crockett Parkway, back down the mountain. This was a great road, twisting, winding and doing all the things we liked. Eventually, it flattened out and then we came to Winchester.

I called Jerry and caught him as he was fueling up. He was just getting ready to call me and tell me they were in Fayetteville, about 40 miles west, and staying in a Best Western. I found it on the GPS and told it to take me there. Unfortunately, rather than go to the by-pass, it took me through town. Downtown Winchester has the most convoluted street and traffic pattern I have ever seen. Finally, we escaped and headed west on the new four-lane road. This was so new that Stella didn't know about it and (shades of Iowa) thought I was going cross country. She gets really agitated when this happens. 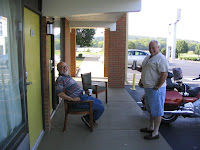 We found the Best Western without further incident and got a room almost right next to Slammer and Toby, who we found sitting outside relaxing with refreshments. My cell phone wouldn't work,telling me the system was busy, so we couldn't call home. I emailed Harry the hotel phone number. The hotel restaurant had a nice buffet for $5.99, so we ate well and then planned tomorrow's ride. Lynchburg, home of Jack Daniels, was only about 12 miles away and we'd be going through Memphis so Graceland was a possibility. After exploring the possibilities, we turned in early (as usual).
Posted by Jim "Skid" Robinson on 9/18/2007