A Day In Sudbury

It was cold and wet this morning. A fine day to not have to ride. We went over to Gonga's Grill for breakfast and then dropped Sandy at home. Her back has been bothering her for the last couple of days and we figured she could get some rest while I took Sherm on a tour of the Sudbury Basin in the van.

In order, I took him to the Sudbury Trail Plan offices and shops where Abby Normal Normie gave him a tour. Then we went to the A.Y. Jackson Lookout overlooking Onaping Falls up on Highway 144. Then we stopped at the Big Nickel and, with the plants as a backdrop, I explained the milling, smelting and refining processes CVRD Inco (formerly Inco) used to turn ore into finished metal. Then it was over to Little Italy in Copper Cliff to check out the Superstack close up. Then we toured the Laurentian University campus and South Bay Road before finishing at Bell Park. 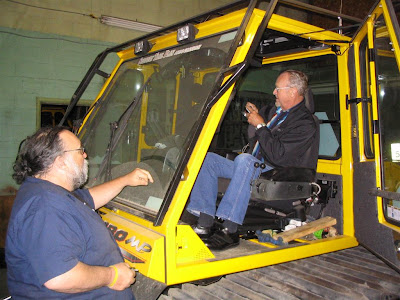 Normie explains how to operate a Bombardier BR-180, one of STP's nine snowmobile trail groomer tractors. 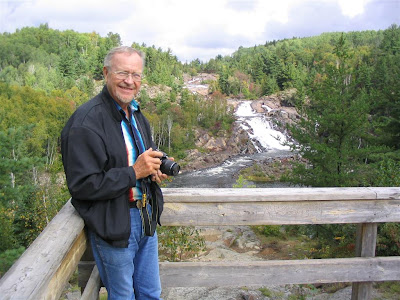 Sherm at the A.Y. Jackson Lookout with Onaping Falls in the background. 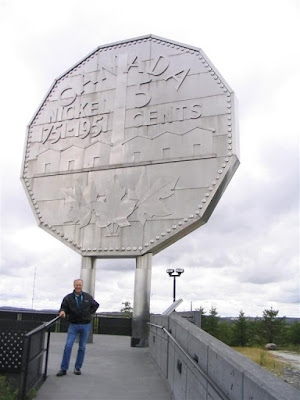 Sherm at the Big Nickel. 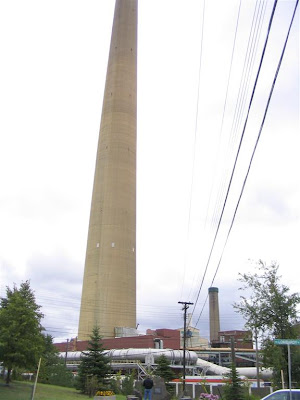 Sherm dwarfed by the 1,247 foot Superstack.

For more on the tour, and the trip in general, you need to check out Sherm's blog. Bookmark it for further reference, since his photos are "Wonderful".

I was surprised and pleased to see that the new Inco owners, CVRD, were in the process of grading, covering and hydro-seeding the old slag dump visible from the road. I went back and Googled it, finding that they were spending $4 million on the project. That's a good sign of their commitment to the community.

We had forgotten that one of the objectives of the day was to set the trailers up to dry. It was now sunny when Sandy called to remind us as we were visiting Bell Park, so we headed home. While we set up, Gary 'Biker' Lamarche dropped by to visit. I also took the time to mow the lawn, which had grown long in the ten days we were away. This was a surprise because it hardly grew in July and August. The new sod was doing quite well.

Sherm took us out to supper at Montana's, where we took advantage of my OPPVA discount for the first time. We all had some ribs of varying sorts and I got to wear some moose antlers (check Sherm's blog again).

Sandy's mother Jan had been hospitalized last night for breathing problems, and so we dropped her off at Memorial Hospital for a visit. Then we returned home and, one more time, hit the hay early. Tomorrow was forecast to be cool and dry, and we would be riding east.
Posted by Jim "Skid" Robinson on 9/11/2007