We woke at 6:30 to the sound of hard rain hitting the roof. We closed the windows, trimmed the awning and went back to bed. It ended by 7:30. This was the first rain we experienced since leaving home and, a camper tells us, the first rain they have had in this area in two months. The forecast says we can expect a lot more over the weekend.

We had muffins and coffee in the KOA main building. I started my Champix quit smoking meds this morning. Sherm had left his boots and chair outside when he went for a shower and they were there when the rain hit, so he had some drying out to do. A check of the weather radar showed systems moving towards us and I spent much of the morning updating the last four days of the blog. We were entertained by Indiana Air National Guard F-16's doing afterburner take-offs and high angle of attack touch and go landings most of the morning. 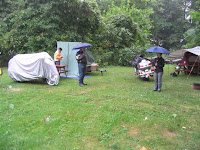 As lunch time approached, we planned to ride out to eat but the weather radar showed we were about to get wet. As we uncovered the bikes, it started. Note the umbrellas in the picture. Bassman came to the rescue by piling all of us in his truck and taking us a few miles to a place Stella picked out. Formerly Larry's Pizza, it was now called the Riley Snack Shop and we had pizza and sandwiches. By the time we were done, the rain had again let up.

Back at the campground, Brillo and Deb had arrived from Bellevue Iowa and were setting up. Brillo came on his Wing and Deb brought the car since she has to be home Saturday for a wedding. About 4:00, Jax and Phin rolled in from Tennessee very wet. At 6:00, Evil arrived in his truck from Bloomington with a cooler full of beer and firewood.

We left for supper at Kleptz about6:30, wanting to get there before 7:00 so we could order off the early bird menu. Evil and Fly waited for Too Tall, from South Carolina, to show up and they all got to the restaurant not long after us. After supper, we returned to the campground where Brillo had started a fire and Piper and Mary's 5th wheel, from Kansas, had been parked. 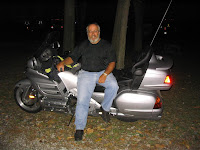 About 9:00, Jim Ayers arrived from West Virginia by way of Wichita. He took a Greyhound bus there to pick up his new (to him) low mileage silver 2005 GoldWing. It looks somewhat familiar. The VROC Tupperware Brigade motto is now "another one bites the dust" as our ranks swell.

Last to arrive, about midnight, were Batman and Patricia. They rode in from Cedar Rapids, Iowa. Shortly after they got here, I turned in although I could hear voices for quite some time afterwards.
Posted by Jim "Skid" Robinson on 9/06/2007