Visiting Snake and Getting Wet

About 4:00 AM, we awoke to the pounding of a hard rain, but the screens were all buttoned up so we went back to sleep. By 8:00, the rain was long over, the puddles had (mostly) soaked in and we headed to the KOA building for coffee and muffins.

Those of you who have read the blog for a while will remember that we lost a good friend, Tim 'Snake' Acree, last March. Today, our goal was to travel east through Bloomington and Nashville to his resting place to pay our respects. It is located near a small town called Gnawbone up some back roads a tourist could never find. 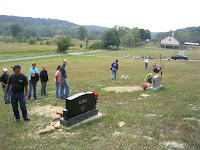 Fly, on his trusty Concours, led a group of bikes and one truck east on US 46. In the little town of Spenser, we passed a biker bar called Skid Row. I made a note to stop on the way back and get a picture. East of Bloomington, 46 gets to be real fun with curves 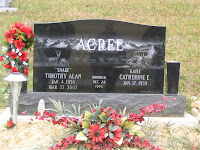 and elevation changes abounding. Unfortunately, as we started this stretch, it started spitting and the pavement got wet so we had to take it easy. We passed through Nashville, turned on a side road, then turned on an even sider road and followed Fly to the cemetery. You can see in the first photo that the gave overlooks a beautiful valley. The second one shows the stone, a real work of art that captures Tim's spirit. 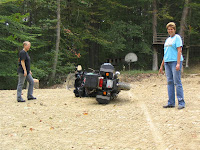 After paying our respects, we followed Fly further on to the site where Tim and KT's house stood. The site, surrounded by trees and a pond, has been cleared and is ready for KT's new home to be erected. On the way in, Fly suggested that anyone not comfortable with loose gravel on hills should leave their bikes at the road. Fly was the only one to ride up the drive and you can see how that worked out, as Sandy and Deb admire the unique parking method. Because of the angles, it took quite a few of us to get the Connie upright and turned around.

Moving on, Fly and his trusty GPS led us on a convoluted road around a pretty lake. At one point, on the side away from the lake, we passed a long property fenced with wrought iron. At the end of the property, chain link fence secured the property line. I wondered who would spend that much on fencing. Later, KT told me that was NASCAR driver Tony Stewart's home. At another point, the road split and Fly, not sure which way to go, took an off road excursion before getting back on the pavement. Eventually, I found we were heading east on a straight road paralleling 46. I could see on Stella that several cross roads would have taken us there but Fly led us all the way to Columbus. There, I found out that his GPS didn't show roads. It was a fishing unit. You may have guessed by now that Fly is quite a character.

In Columbus, we had lunch at a Buffalo Wild Wings and then stopped by to pick up KT at the apartment she is temporarily living in. She came back with us in Piper's truck driven by his wife, Mary. I led us back through Bloomington Friday rush hour. They need more than two lanes. Then, west of Bloomington, we approached a large black cloud to the south of us. I hoped we would squeak by, but the road turned south and it started raining. I pulled over and everyone went to rain suits. Sherm and us just put on the jackets because, before everyone suited up, the skies opened. Back on the road, it rained hard for a bit and then eased somewhat. In Spenser, the streets were running deep with water and getting the Skid Row picture was out of the question.

It stopped raining and the sun came out before we got back to the KOA, but we were soaked anyway. It looked like it hadn't rained there. I installed the video camera Normie loaned me and took it for several test runs. I look forward to getting some real riding footage. Most went out for Chinese food, but Sandy and I stayed and had a Cup 'o Soup instead. I showed Jim Ayers how to remove his new Wing seat so he could install a beaded cover, his preference for combating monkey butt.

The group got back and got the campfire going, and Willie Wonka and the lovely Carlene (our roommates from Colorado) rolled in about 9:00 PM. We didn't know they were coming and they didn't know the venue had changed so they came via Bloomington. They set up their massive Aspen trailer and then we sat around the fire talking. Too tall passed a mason jar with a drink made of moonshine, apples and a cinnamon stick. Very tasty. I finally crawled off to bed about 1:15 AM.
Posted by Jim "Skid" Robinson on 9/07/2007