The rain had stopped by the time we woke up. We peeked out and saw that the lakes had receded although the ground was still very wet. No rain was forecast here today. The only thing worse than tearing down in the wet is tearing down in the rain, so we looked on the bright side as we dismantled the camp. Then we stopped for coffee in the office and said our goodbyes. We'll be seeing a good number of these people in two weeks in Arkansas.

We headed east on I-70 under overcast skies. Before Indianapolis, it spit lightly on us but we ignored it and forged ahead. In Indianapolis, as we took the ramp to I-465 S, there were police cars and traffic cones on the left. We squeezed down to one lane to avoid a semi that had taken the corner too fast and was rolled over on its side, half on the grass median and half on the road. 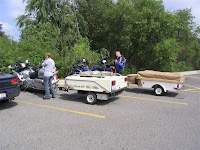 Around the circle, we caught I-69 N and actually had some small patches of sunlight appear. We stopped for lunch just before the Michigan line, where I took this picture of the convoy at rest. When we started again, the clouds dissipated and we found ourselves under a blue, sunny sky. The temperature got up to 79F. The miles were passing by as Sherm and I talked back and forth on the CB's.

At the next gas stop, Mount Pleasant Michigan, Sherm remembered that he had been here consulting with people who wanted to make a motorcycle camper trailer. They should have listened to him. Near the 127/I-75 split, there was my nemesis, a wild turkey, starting to walk out on the road ahead of me. For those who don't know, Sandy and I were hit by a flying wild turkey about five years ago. I swerved and hit the horn and the bird went back to the shoulder. Then I could see him cross in my rear view mirror.

My memory is going. I thought the motel we stayed at in Grayling was an Econolodge, so I told Stella to take us there. We found an abandoned facility, not familiar at all. Then we went back to the Days Inn that Sherm and Sandy saw. This was the place we had stayed. We walked down the road to a Big Boy restaurant for supper where Sherm and Sandy made good use of the soup and salad bar. Then we shopped at the Dollar General and the Big K before coming back to the room, blogging and turning in early.

Your memory is selective my friend thats all and I hope the day you commerated your entrance to the world , we are still waiting for you to join society was peaceful and good for you.
Ciao
Ride safe
Doug