It was a slow starting morning since we only had a short way to go to Burlington Vermont. At 8:00 AM sharp, I called Traxxion. They open at 9:00. OK, we had breakfast, packed and went to Wal-Mart to buy Sandy a hair dryer (she left hers at home) and some Robaxacet for her back (since I don't think it's available in the US). Her back is most comfortable when riding, but sometime she needs help getting out of a restaurant booth.

I called Traxxion at 9:00 AM sharp. Got connected to Mike Hardy. Explained the shock situation to him. He said it sounded like a blown seal (insert penguin joke here). They have a new service shop in Lake George, New York. He'd call and check their capability of dealing with this. Called back at 9:30. Lake George can't rebuild and doesn't have a new Traxxion shock in stock. They could put and OEM shock in but that would necessitate two removal/install procedures, not an easy job on this bike. I said that it was only 1,284 miles from Bethel to Atlanta and that if we left Sunday we could be there Tuesday by 9:00 AM. He said they would look after us. We don't have to be in Eureka Springs until Thursday, so this should work out fine.

At the border, we faced a stern lady who had also cleared us the last time we came through. Once again, there was licence plate confusion as Sherm pulled in after we did. Then we hit the traffic circle, rode through gravel to catch our highway, and headed east through the Mohawk reserve. The back of the bike was bouncing along as I looked for something interesting for Sherm.

On 122, I stopped at the town circle in Constable and Sherm met Eugene Talon in the general store built during the Civil War and bought by Mr. Talon's father about 1900. Eugene had been to Coos Bay in 1942, so they became fast friends. 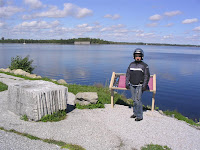 From Constable, we found US 11 and headed through Champlain and Rouse's Point, crossing the bridge into Vermont. On the New York side, we saw Fort Montgomery (picture), built after 1844 to protect against invasion from Canada. They haven't needed it. Yet. The original fort, known as Fort Blunder, was started before they realized it was on the wrong side of the border so they gave it to the British.

On the Vermont side, we followed US 2 down North and South Hero Islands. Like Rouse's Point, these are so pristine they could be in a story book. Once on the mainland, we continued on 2 the short way through Winooski and into Burlington. This is a very picturesque city with a heavy university influence. Mindful of the Ottawa fiasco, we let Stella find a few hotels and phoned them from a gas station. The man at the one listed as Super 8, now a Rodeway, was willing to deal so we went on down and got a room. It wasn't even 2:00 PM.

All of us walked across the road to K-Mart, where Sherm scored a deal on another pair of shower shorts and a high-lighter so we could mark our travels in his atlas. Then we had supper at the Olive Garden, although we got the lunch menus and S&S had the all you can eat bread sticks, salad a soup deal for $5.99. I had seafood fettuccine Alfredo. Back at the hotel, Sherm went out to wash the bike and I typed the last four days of blog.

Sherm has decided that, when we leave for Atlanta on Sunday, he will head straight to Eureka Springs to get his new rear tire (being shipped there) installed. I feel bad about dragging him all the way up here and abandoning him, but you can never plan for contingencies. By Thursday, we should both be in ES with ready to roll bikes.

We spent some time planning routes and then went to bed fairly early. Tomorrow, we have to ride hard to make the 150 miles to Bethel:-)
Posted by Jim "Skid" Robinson on 9/13/2007