On To Terre Haute

It was another clear, warm morning. There was rain forecast for Terre Haute later, but we'll burn that bridge when we come to it. The GPS said it was 332 miles to Terre Haute by I-70 and, wanting to get in at a reasonable hour, we decided to superslab it.

I-70 through Zanesville and Columbus had a noxious yellow haze hanging in the air. By 9:40, we were already baking. The car speed limit was 65 MPH while trucks were 55 MPH and the trucks weren't doing over 60. We set the cruise at 65 and flowed with the cars. This was all well and good east of Dayton. West of Dayton, the rules changed and the trucks picked up the pace to around 70 MPH.

At the Indiana border, I pulled off for gas.l I was starting to doubt my fuel gauge since it wasn't going down as fast as I expected. I usually run mid-grade when towing the trailer in warm weather to prevent pinging. This time, I ran 93 and added a have can of Seafoam gas additive to clean out the system. I pumped the expected amount of gas for the gauge reading and figure that one of these actors yielded me some really good mileage. Now which one was it?

I really have to study up on the Amish. A couple in Amish dress pulled up in a Taurus and went in to McDonalds after stopping to take a long look at our bike. Why do they get a Taurus and others get buggies? What is the difference between Amish and Mennonite? Mark this for some winter study. 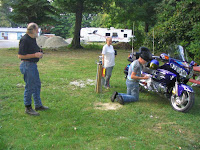 On the outskirts of Terre Haute, Stella took us right to the campground. The staff were very friendly and checked us in right away. Sherm from Oregon and Fly from Cedar Rapids Iowa were already here. We spent some time catching up on who's been where and what's happening next. It looks like Sherm will be going to Maine with us. Hooray. In the picture, Fly and Sandy are watching Sherm clean The Phoenix. This bike has risen from the ashes in several ways and sports some spectacular graphics. 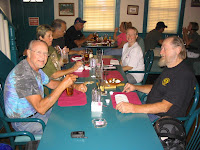 Just as we were getting ready to head out for supper, Bassman and Deb pulled in from Oklahoma towing his Classic behind a pickup truck. They unloaded and we all headed over to a restaurant Fly had scoped out on US 40. The place was called Kleptz and the hostess recognized Fly when he walked in. Most of us ordered off the early bird menu and had some good food at reasonable prices. This photo shows, Sherm, Deb, Bassman, Sandy and Fly at the table. Our server ducked out of the picture before I could snap it. 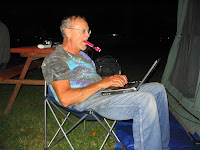 Back at the campground, as the sun went down, we got on line with the WiFi. Here Sherm uses his patented light holding technique to see the keyboard as he types. Sandy turned in early with a headache, but Fly, Sherm and I sat around in the dark talking about life, the universe and everything before turning in about 11:00 PM.
Posted by Jim "Skid" Robinson on 9/06/2007