Riding the Green and White Mountains

It was a clear morning in Burlington, but the radar showed a system approaching from the west. Lucky we were heading east. We had another long day planned, about 150 miles or so. Departure was leisurely, but we did pick it up as the lead clouds from the incoming system started to roll in. We did take time before leaving to talk to an Ottawa couple on a pair of HD's headed for Maine and Nova Scotia to put a fine end to their season.

We started out at Wal-Mart, where Sherm bought a new GPM (General Purpose Map). The Wally World editions of the Road Atlas have been a great value, but they seem to have increased to price by a dollar with the new edition. Now they are almost a whole six dollars, so Sherm may have to spring the $650 for a GPS instead:-) 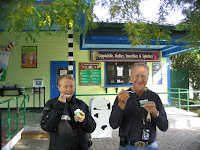 I led east on 89, bouncing my way along following Stella's directions. Our first destination was the Ben and Jerry's Ice Cream Factory just off 89 on Route 100. There were large parking lots with stairs and a ramp leading up to the visitor area. There was a formal tour that cost $3.00. We didn't want to take the time, so we each had one scoop of ice cream for $3.00, which my partners in crime can be seen eating in the photo. I had banana rum, Sandy had butter pecan and Sherm had a concoction called Phish Food. Later, we found that the $3.00 dollar tour included a free scoop of ice cream........

From the ice cream mecca, we continued east on 89 to Montpelier, the capital of Vermont. The gold domed capitol building was gorgeous, nestled in among the old buildings and the lush green hills, but the highway through town was atrocious. Especially if one was missing the damping portion of their suspension.

One thing that Sherm wanted a picture of was a Vermont maple syrup farm. I had passed one, and we were getting closer to New Hampshire without seeing another, so I asked Stella. She came up with a Maple Syrup Museum, so I told her to take us there. She eventually told us to turn off Highway 2 onto a little, roughly paved road through a valley past quaint dwellings. I bounced some more. After about five miles, as she said we were nearing the museum, we returned to Highway 2. The damn thing was on the main road and I have no reason for the detour. It was pretty, though. 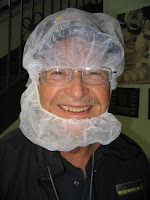 On the east side of St. Johnsbury, we found the museum located at the Maple Grove Farms syrup and maple sugar candy factory. Their tour was only a buck and Sherm paid for everyone. In return, they issued hair nets and, where required, beard nets. Sherm looks like he is ready for surgery. John, our guide, had the three of us (it was a very private tour) watch a video on the harvesting of the sap and the making of syrup and candy. Maple Grove is the largets syrup producer in the USA and the largest candy producer in the world. 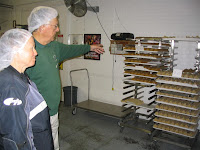 In the plant, we got to see the old syrup bottling line. Newer and faster lines were in the large building out back. Then we got to see the candy drying. John is pointing out the racks upon racks of treats. I love maple sugar candy, but am trying to keep the blood sugar in line. I had a sample in the gift shop, but a couple of people I know took more than one.

After the tour, I spent some time in the museum talking to a younger man playing a fiddle for atmosphere. It seems he and his significant other own a sugar bush. To demonstrate my total fixation with my trade, all I could think about after watching the process was how much of a parallel, from a product accounting and costing standpoint, there was to ore processing. I would have liked to to spend a day or two with their accountants. I think I am a sick puppy....... 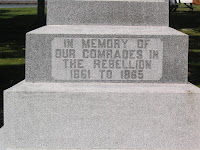 Before leaving Vermont, we stopped in Lunenburg for a brief moment. I'm sure my southern brothers and sisters will get a kick out of the dedication on this Civil War monument in the park. The Rebellion. First time I have seen it referred to that way. I guess it didn't have quite the same impact in Northern Vermont as it did, say, in Atlanta.

The trip across Vermont was very pretty, as usual. Not many trees changing, but very green and 2 is a cruiser's road. It sweeps back and forth, up and down, with each bend bringing new scenery to admire. Crossing the bridge into New Hampshire, the texture changes just like a switch was thrown. Instead of quaint, it becomes rough hewn. Instead of all green, brown finds its way into the mix. Instead of tree covered, the White Mountains are rugged and stark. But it is breathtaking all the same. 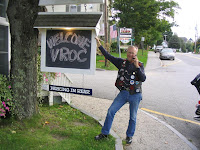 The temperature had risen to 74F, the warmest we had seen since Terre Haute. Since NH is narrower at the top than Vermont, it didn't take long to cover the ground to the Maine border, where the scenery changed again. Sand and pine trees, much like Northern Ontario up around Timmins. Not far across the line, we came to Bethel and the Sudbury Inn. As you can see from the sign out front, they were expecting us.

Ol' Phart Joe, Lost Bob and Steve Cifra were there to greet us. We parked out front after Sherm unhooked his trailer out back, did introductions and visited while others arrived throughout the rest of the afternoon. We had supper in the Suds Pub. After dark, Ron, Laurie and Brad (remember the June W(BG)V trip?) rolled in along with Brad's lovely wife Judy. Ron and Laurie were on their new GoldWing. Sandy and Sherm went to bed relatively early, but Ron and I were talking about many things until we noticed everyone else was gone and it was 1:00 AM. Then we called it a night.

Ron is planning a two week trip to Nova Scotia next summer. If it fits between the major commitments, I'd really enjoy traveling with them again.
Posted by Jim "Skid" Robinson on 9/14/2007