I didn't rise too early this morning. I lay in bed ignoring the sounds Sandy, Heather and Tom were making in the kitchen while I read some more of Diamondback, Phil Bowie's adventure novel centred around Maggie Valley.

When I finally did get up, breakfast was a ham sandwich and a tangerine we smuggled across the border (thanks again, Butch & Tina). We all worked on the traditional word puzzles for a while and then I got yesterday's blog ready. I walked over to the main lodge to post it and got back just in time to get ready for the group ride. Heather and Tom decided they would skip the ride today, so Sandy and I went on alone. 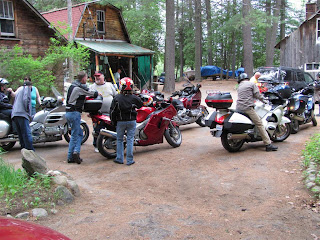 The group getting ready to ride
Today's route was the same as last year around the lake to Barry's Bay. The road was rough and sandy with a short piece of gravel. In Barry's Bay, Bay Days were in full swing with many vintage cars and other displays. Sandy and I shared a small diet Coke and a small order of fires and then walked with Eric and Maggie to the Dairy where we got ice cream cones. On the way back, we saw a 1965 Cobra and a mid-fifties Porsche Spyder (just like James Dean's ill-fated car) head out of town together like they were going to play. Back at the bikes, everyone had reassembled and the three GL1800's, Ken, his twin brother Kevin and I headed back to the lodge via the much better surfaced Old Barry's Bay road. It winds through the countryside and we pushed along at a brisk clip.

Back at the lodge, Tom and I borrowed Nic's SUV and went back to Barry's Bay to buy some fireworks to contribute to tomorrow's spectacle.  I bought some at Stedman's and Tom got two 100 shot cubes at Home Hardware.  I stopped to talk to PC Gonzalez of the OPP who, along with an auxiliary, was displaying an OPP patrol boat for Bay Days.  Then we headed back to the Lodge and gave Brian our purchases.

At the cabin, we settled in and I finished reading Diamondback. It was a good story with many familiar places. I found it amusing in the end when one of the marginally bad characters was identified as a Bryson City lawyer named Kunkel. I wonder if Phil Bowes ever met Fred and Mo?

After a light supper of grilled cheese sandwiches with ham, we went visiting a few other cabins. Then we wandered down to the Round House where people had started to congregate. I got a chance later in the evening to meet Dave's new lady Karen, who seems to be very good for him. He got out his 12 string guitar and sang some songs inluding Fare Thee Well, Love (my favourite Rankins tune) which I have been trying to get him to learn for years. Brother Rob provided part time accompaniment on the recorder. I have never heard Dave sound better. 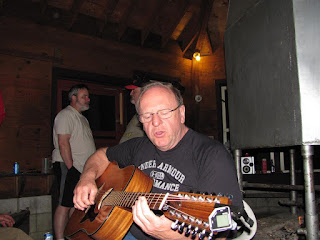 Dave entertaining the masses
Sandy and the kids headed for the cabin before I did. I was happy just sitting and listening to the hum of people and the sounds of Dave singing and playing. When I finally left about 1:30 AM, I had to negotiate the dark trail along the river's edge without benefit of a flashlight. I'm sure it used to be easier to do this back when I was less sober. Reaching the cabin without hurting myself, I turned in for the night.