The sky was totally clear this morning in Ithaca. This was a new experience for us lately. I used the new clippers to cut my hair and went out to check the tires. The rear now has less than 1.5/32nds of tread (I'd say 3/64ths but that isn't the way tires are measured) but it looks like it will get us home as I predicted. Next time, I won't try to squeeze quite so much out of the rubber.

The hotel didn't have a complimentary breakfast but the buffet was only $6.95. Since we would be leaving late, this seemed like a good option. While I caught up some blogging, Tom took a large amount of US pennies to the bank. They gave him wrappers and made him roll them before accepting them. 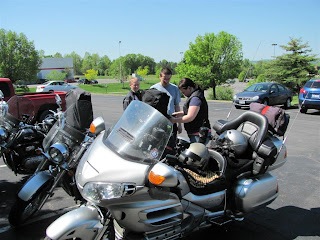 Packing the bikes under a blue sky
We left Ithaca at 11:10 AM under a clear sky. The temperature was 24C. I saw a sign that said New York State has a noise limit of 90db. I guess Cheap B won't be able to visit here because Stewey's sound meter measured his Rogue at 122db.

In Weedsport, I was trying to find a place with shade because the heat was becoming oppressive. Or maybe we just weren't used to it. In any case, I found a gas station with an overhang. A local came by and commented on our Vulcan patches. Seems he has a 900 that he claims to have had up to 130 MPH. Other than his penchant for fiction, he seemed like an OK guy.

We continued north on NY 34 and turned on NY 104 just before Oswego. As we approached Lake Ontario, the temperature cooled and became quite comfortable. Although it was a short tank, I decided we should fill up here because we could make it to our destination from here and the projected fill spot was in the middle of nowhere. As Chuck Burt always said, "See gas, buy gas". It was a good plan because the only station in Dexter NY was out of fuel. 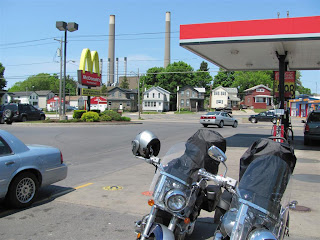 I find that upstate NY drivers are quite laid back. Almost everyone does the speed limit. Since there aren't faster OR slower drivers (including big trucks), everyone moves along at a safe spacing. It is a relaxing way to travel if one isn't in a hurry. We weren't.

We branched off NY 104 onto NY 104B and followed that to NY 180. Along the way, I saw signs for a Rail City Historical Museum [http://www.railcitymuseum.com/]. Quite the story at the link. We also had to slow because they were creating new tar snakes along 104B. I hate tar snakes. They are slick much of the time and are particularly obnoxious in curves.

We stopped in a little rest area near Henderson that was supposed to provide a scenic view of Lake Ontario. As usual, they allowed the bushes to grow up, obscuring the very view they were promoting. 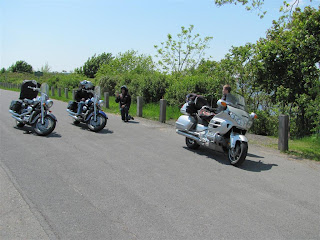 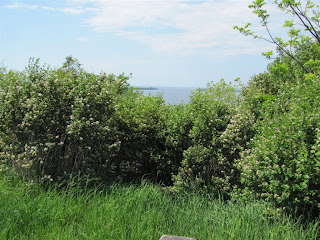 A glimpse of Lake Ontario through the overgrowth 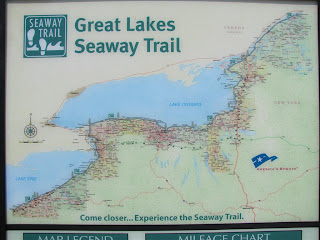 Great Lakes Seaway Trail
Near the end of 180, a gentleman had stopped his car and was trying to herd a snapping turtle off the road with a stick. The snapper was having none of it and was biting violently at the the stick as it kept trying to get back onto the pavement. There is some kind of life lesson here but I'm not sure what it is.

I got my US parting gift where NY 12 meets I-80. We stopped for a flagman and I put my foot down in fresh tar. Yes, they were making more snakes. Dragging my boot to clean it, we took the ramp onto I-81 and paid the toll to cross the two bridges to Canada.

Customs was a breeze. A couple of questions and a welcome home and the we were headed for Ganonoque on the 1000 Islands Parkway. We caught up to and followed a Mercedes SUV travelling 70 KPH in an 80 and the cabbage driving it still hit the shoulder. With a line of cars behind us, we reached Ganonoque and selected the Best Western Inn because of the indoor pool and functioning hot tub.

We had supper at the attached Good Time Charlie's restaurant. Sandy and I had Cobb salads for a change. Then we had to clear out because a two bus tour from Quebec was arriving for supper at 7:00. After supper, I blogged while the other visited the hot tub. They met a couple from Toronto on a Harley. We do have a good neighbor in the next room. Their black Hyundai Elantra (identical to Tom's) has Illinois plates and a Ron Paul bumper sticker.

After a bit of TV, we turned in. I am getting more sleep than usual on this trip which means I am probably getting close to the proper amount.