We were in no rush this morning. Bikes had been rolling out since ODark30 but we got up about 7:00 and packed in a leisurely fashion. We said a lot of goodbyes and there was a lot of "See you in Cortez". I talked to Derrick and reserved the same room for next year since the luck of the calendar has it, once again, a week earlier than Combermere. 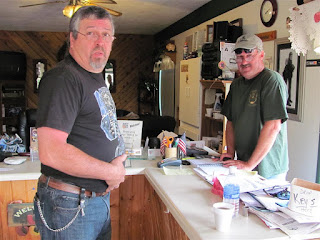 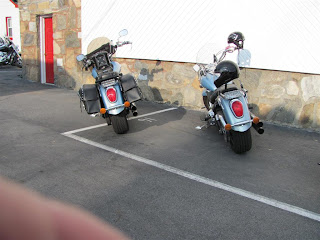 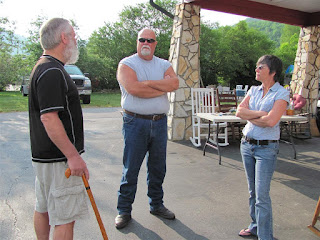 Wrong Turn, CB and KT making plans
We were loaded and on the road by 9:00, making the long trek to Country Vittles for a final breakfast. We hit the road for real about 10:00. We turned of US 19 onto NC 209 which went straight north. After it crossed I-40, we twisted and wound our way along only seeing two cars all the way to Hot Springs. After where it turned onto Betsy's Dap Rd, there was a lot of gravel, branches and mud on the paved surface.

I should have made a comfort stop in Hot Springs but pushed on a few more miles to the junction of NC 209 and NC 208. You can tell by the quality of the road that most Hot Springs traffic arrives from this side. The planned stop was the Steady Eddy coffee shop, where we had previously found strong coffee and good smoothies. Unfortunately, as the young lady who owned it had predicted a couple of years ago, it was out of business. 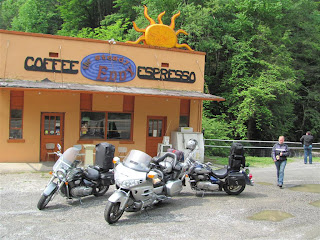 The Steady Eddy
We turned north on NC 208 and then onto NC 212 where we saw the sign commemorating the Shelton Laurel Massacre. Brutal times. At the top of the ridge, the road became Tn 352 and the pavement was wider and better. The road stil twisted though, all the way to I-26 at Erwin, where we made the long overdue pit stop. The mud and gravel notwithstanding, this is a fine way to bypass Asheville and the Interstates.

Riding into Johnson City, we decoded to spurge for a night and went four miles off I-26 to the Hampton Inn. Unfortunately, the pool was closed but the manager directed us to the Double Tree Inn. Their pool (a nice indoor/outdoor affair) was also closed but Heather made the decision to stay. Tom and I tuned in to the NASCAR race from Dover.  The storm hit hard at 5:15 so we ate in the sports bar.  After it was over, the bike covers needed some adjusting. Good thing they had been tied on. 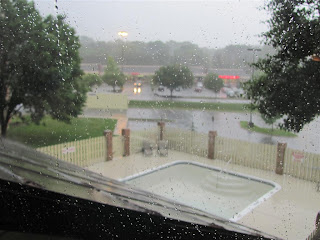 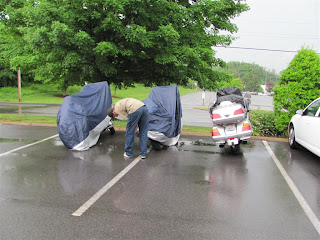 Fixing the bike covers
Then I managed to catch up on some work until 8:00 when we all watched the Survivor Finale. And Russell got NO VOTES, so I was happy.