It was grey and cool this morning but there was no major organized rain in the area. We had the continental breakfast and didn't start packing until 7:30. 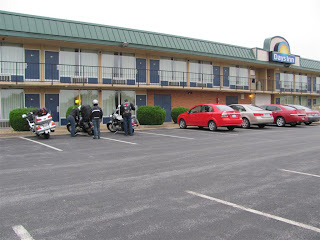 Packing the bikes at the Days Inn Luray
We left Luray at 8:15, turning onto the Stonewall Jackson Memorial Way. I cast a thought towards Gord as we did so. Riding toward Front Royal, I was pondering how Virginia is one of the prettiest states when I almost didn't see the School 25 MPH sign. Luckily, the flashing blue lights on the pickup truck were visible before I got to the reduced speed zone so I was able to haul it down before I got in serious trouble. Then I stood on it again as we came up on two deer in the ditch. They were good deer and headed into the brush.

Riding through Front Royal, we headed on to Winchester where a check of the ambient air temperature showed 13 C. Again. That makes three days in a row.

We ground up I-81 towards Harrisburg Pa, once again covering four states in 45 minutes. Patches of blue sky started to show and, taking a break at Shippensburg Pa, the temperature had gotten all the way up to 18C. I did note a lot of Florida plates heading north, paralleling the seasonal migration of the goose or the Canadian snowbird. The Floridians can be identified because they are usually found in black Cadillacs hogging the fast lane.

As we reached Harrisburg, we swung up along the Susquehanna River on US 15. In Selinsgrove, we stopped for lunch at a Denny's. I had a Superbird sandwich and fries and some chicken noodle soup. Sandy ate half my Superbird sandwich. Amazingly, we put sunglasses on when we came out. Sandy even had a tiny screwdriver to fix the arm of Heather's shades. My GPS continued to act flakey but I got it to do what I need. This time. 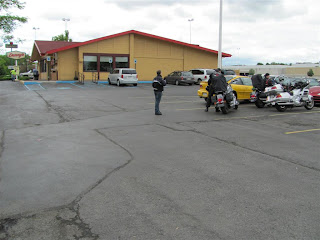 Denny's in Selinsgrove Pa
At Shamokin Dam, I started up a road I have never been on before. We left the familiar US 15 for Pa 147 north. We followed this a short way to Pa 405 and then to US 220. I found 220 to be a nice flowing two-lane road but novice riders have nowhere to get out of the way of the trucks who are hustling to make time.

We stopped for a few moments in Dushore Pa. As is my habit, I asked an older gentleman in front of the Shell station how to pronounce the name of the town. "Any way you want" was his reply.  Accommodating people. 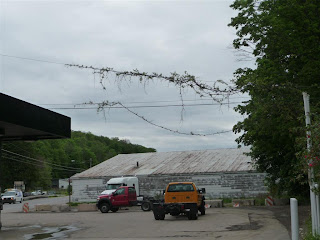 Hanging vine in Dushore Pa
Continuing north, we approached Sayre Pa on the New York border where we planned to raid a WalMart for necessary items. The last few miles in, it started to drizzle and then lightly rain. Again. We parked at the Wally World fully expecting to be going to rain gear when we came out. Funny thing is that in the time it took to buy one set of electric hair clippers (call me shaggy), a box of flavoured coffee creamers (unavailable in Sudbury) and two 3-way electrical outlets (to replace the 6-way still gracing Room 15 at the Applecover Inn), the rain stopped. More than that, the sky was mostly blue.

From the WalMart lot, I called the Comfort Inn in Ithaca NY to see if they had an indoor pool. Nope, but the clerk sent me to the Ramada. They had one and Don, the desk clerk, cut the rate by $20.00. We were almost an hour away but we now had a destination.

Crossing into New York, the 5th state of the day, US 220 ended and we headed north on NY 34. The intent was that we would follow this all the way to Ithaca. The GPS had other ideas and took us on a short cut (maybe) from Van Etten up a thing called Langford Creek Road. It was interesting and we were not cursed with heavy traffic as we rode past farms that may have never seen a tourist before. But all's well that ends well and we managed to arrive safely in Ithaca, the stoplight capital of the world. Seriously, 34 through the city has more traffic controlled intersections in a row than I have ever seen before. We managed to stop-and-go our way to the other side of town where we found the Ramada and got checked in. We had a gross room. Actually it was fine but it was Room 144.

We walked across the street to Applebees where I had the best and, at the same time, least expensive steak of the trip. Both couples had the 2 for $20 deal. Two entrees and a shared appetizer for $20. After eating, we returned to the hotel and suited up for a swim. 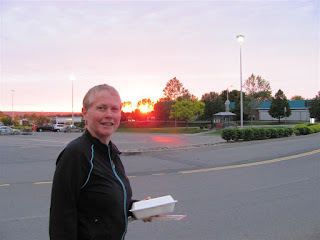 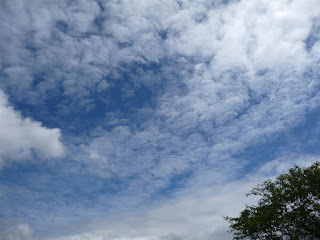 Amazingly, blue sky in Ithaca
Of course our luck wasn't perfect. The Jacuzzi was down. Still, everyone splashed around in the pool for a while before heading back to the room to see who the two American Idol finalists would be. As predicted, we will get to see Lee and Crystal go head to head next week.  Then, we pretty much faded out. 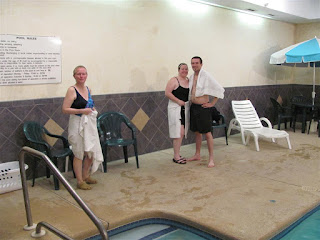 The gang around the pool 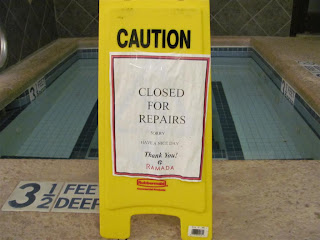 No hot tub for you
Today's Route: