We were graced once again with a fine morning, clear and sunny. It is now one month until the official first day of summer and things are shaping up nicely. The forecast for the weekend is excellent as well, even though I don't trust the weatherman any further than I can throw my motorcycle.

The restaurant was supposed to open at 7:00 but the bus tour people had it shut down until 8:30. We took the time to load the bikes and get everything set to go. At 8:30 sharp, we were back to sample the complimentary breakfast choices. Brown toast and either cereal or eggs or pancakes with fruit. Sandy and I had raisin bran and brown toast.

After breakfast, Tom and Heather headed to their bank while I was going to check out and stop at TD for cash. We agreed to meet at a Mr. Gas station on Hwy 32 that showed on the GPS. I was a little late because I stopped to talk to the Illinois couple with the Ron Paul bumper sticker. We talked about the US Constituion and libertariansim. He said he considered himself to be Thomas Jefferson reincarnated and said he would go home and tell his friends he had actually met a Canadian libertarian.

I was also delayed when I went to check out and found no one at the front desk. After hitting the bell twice and looking high and low, Amanda finally appeared and, without apology, gave me my bill. I can tell you that this Best Western is far from the best.

We hit the TD for cash and then followed the GPS to the rendezvous at the Mr. Gas station. As often happens, there was no Mr. Gas but we met at the Esso just south of that location. My principle of not separating on the road was, once again, validated.

By 10:10, we were headed north on 32 with only one tiny cloud way off on the horizon. I jolted myself when the GPS speedomter read 87. I'm not yet used to being back in kilometers. We paassed a pickup truck with a rotating brush on the front cleaning gravel off the intersections, something greatly appreciated by anyone on two wheels. We also passed a sign saying that turtles would be crossing the road between May and September. This was the first one of those I have seen. Soon after, we passed a box turtle on the shoulder looking longingly across to the other side.

We passed the road leading to Chaffee's Locks and the Opinicon Lodge, a place where I attended several Steelworkers union schools. At Crosby, where 32 meets Highway 15, I stopped so we could verify our GPS routing. Then we continued on 15 to 36. Up through Bolingbroke, 36 has a whole series of pleasing 60 Km curves and we passed another turtle, this time a snapper, crossing the road.

From 36, we caught Highway 509 which took us over new ground through Ompah, Palmerston and Plevna. It was a tar and chip road, but it was in good shape and we enjoyed the remote country. The only problem was that there was absolutely nowhere to stop for coffee. We were also bombarded by hordes of dragonflies, although they had an uncanny knack of mostly missing the bike. I did notice fir strees near Plamerston dying and wonder if Pine Bark Beetles have gotten this far east.

From 509, we took Highway 41 north to Highway 28. Heading west on 28, we came across Mapleton House, a wood structure that has a restaurant and features all thing maple. They were only open from 12:00 until 2:00 and, unusually lucky for us, it was 1:00 PM. They have all grades of syrup, candy and maple jellies. I had an excellent clubhouse sandwich and a tasty maple butter tart. Heather had a maple milkshake. To top it off, some nights they even commit Karaoke. 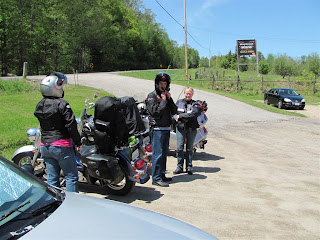 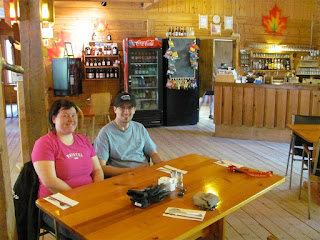 Inside Mapleton House
At the junction of Highways 28 and 514, we were stopped by ladies raising money for cancer research. Having no small Canadian money, I kicked in a US dollar. Starting up 514, we found someone had gone berserk sealing cracks with tar snakes. There were sometimes six or more parallel lines and they criscrossed each other. On a bike, these can be slick if you are in a corner. Luckily, this nonsense only went on for a few miles to where I think they ran out of tar.

We arrived at Stevenson's Lodge with the odometer reading 199,999. What are the odds of that. After finding our cabin assignment, we offloaded our luggage and went to Barry's Bay for groceries, turning over 200K kms on the way. 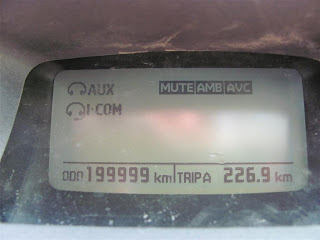 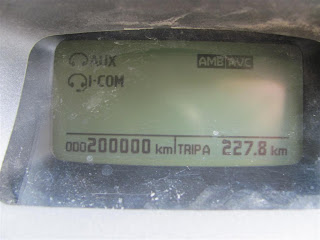 200,000 kilometers
Back with the groceries, we headed to the lodge for an evening of chili, hot dogs and catching up. Brother Dave had taken Marc's new BMW for a ride and talked about his impressions. Pat and Shelley from Rochester, who haven't been up here for years, arrived with their twins. Eric and Sherry will miss their first Combermere because they took a road trip out west and don't want to come home. All in all, it was a pleasant evening. We turned in about 11:00 PM and this was the first time in many years we didn't have to light the wood stove for heat. 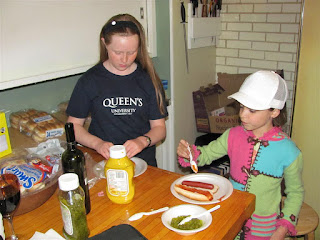 Katie and Gabrielle getting some sustenance 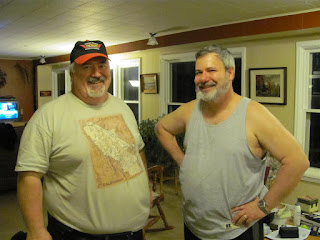 Marc and the newly found Pat 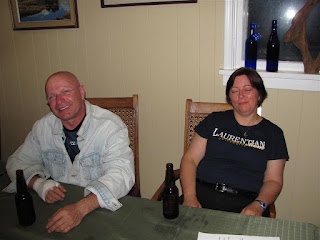 Eric A and Maggie
Today's Route:

What? You mentioned some others that are missing out this year, but didn't mention that your other daughter and son-in-law (and favourite grandaugter) are noticeably absent this year as well?

Anyway, make sure you say hi to everyone for us!!!

What? You mentioned some others that are missing out this year, but didn't mention that your other daughter and son-in-law (and favourite grandaugter) are noticeably absent this year as well?

Anyway, make sure you say hi to everyone for us!!!

Sorry about that. Wish you were here.