We were up by 7:00 AM. The sun was shining again and we still hadn't had to light the wood stove. Heather and Tom decided that they would take a ride together and we decided to meet them at Mapleton House for lunch at 12:30.

With the kids gone, I caught up on my bills and blogs. Then we went over to the lodge so I could post them. The weatherman lied about there being no precipitation today because it clouded over and we got a short but heavy shower in the late morning. We also got a chance to say goodbye to Pat, Shelley and the twins as they headed back to Rochester about noon. Their long weekend isn't for another week and they needed to be back at work Monday. It sure was good to see them after all these years.

I was ready to leave for Mapleton House at noon but Marc, who said he would go with us, was nowhere to be found. We caught up with him in Cabin 2 and found he had changed his mind so we set out on our own for the rendezvous. Riding down 514, we caught up with a red Toyota following two motorcycles following a pickup truck. Guess who the bikes were? Heather and Tom had ridden to Pembroke and Cobden and we had now found them just before we got to the spot we were supposed to meet.

Lunch at the Mapleton was great as usual. This time, everyone had maple tarts for dessert. After lunch, we headed back to the lodge via Highway 28, Boulter Road and Highway 517. The latter wasn't a treat, especially where the road crosses the Renfrew County line. Sand in the corners, a few patches of gravel and broken pavement made it a less than pleasurable experience.

At the cabin, we gathered out word puzzles and quiz answers and took them over to the main lodge in time for the 3:00 cake and ice cream session. A group had a projector set up and were playing Wii bowling. I haven't played since Sandy beat me two games straight and didn't get a chance today. 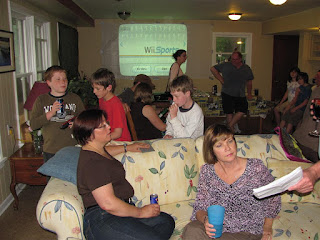 Playing Wii and having cake and ice cream in the lodge
When the winners of the puzzle quest were announced, we came out in first place, winning a nice bottle of wine. I hadn't thought that we did that well, but it was a team effort with each of us contributing some answers.

We returned to Cabin 23 for some food and a nap. The kid with the small wheel motorcycle that had been running up and down the road all weekend was at it again. This thing sounds a bit like a chainsaw at full throttle but is more annoying.

About 8:00 PM, we headed down to the beach to check out the fireworks preparations. In past years, we have had a pretty even mix between the tubes that need to be buried in the sand and the mortars that are launched from a solid surface. I have handled the mortars, which have a base and consist of a single shot, from the end of the dock for several years. Last year, large muti-shot cubes appeared for the first time and now that made up 90% of our arsenal. These fore off a sequence of shots, sometimes over 100, for a coordinated display. Most of them carry the Vulcan brand, which made me feel right at home.

After discussions with Dave, we convinced him we could handle all the cubes and mortars with my team of three. I would line up the order, Kevin would place the shots and Tom would light. Thanks to Brian, all the fuses had been untaped and prepped already.

As darkness fell, I set off one mortar as a five minute warning for the spectators. Soon after, Marc and Oliver started the single short line of beach munitions. The first little ones spluttered and whizzed and the last few large ones sent up respectable displays. Then we started our part with Kevin placing the next cube as the previous one was still shooting. This was a dangerous job, especially with cardboard shrapnel (some of it still burning) raining down on us. Still, we kept up a seamless and non-stop show for over a half hour. Brian says it is the best we have ever done.

After the show was over, the kids cruised the beach with sparklers. We started saying our goodbyes since we would be leaving early in the morning. We ended the evening with a walk back to the cabin, this time using a flashlight. The light works so much better. Everyone was in bed shortly after 11:00.