We were up at 6:00 AM as usual. I found that the Netbook battery was flat because the power cord wasn't plugged in correctly. Got it plugged in better and then started to get two days of blog notes drafted. The WiFi signal doesn't reach the room so I draft the text in wordpad, sort the photos and then go sit in front of the office to upload them.

We had planned for an 8:00 AM breakfast. Mty and Stewey were up and ready but this is what we found when we knocked on Stonewall's door. 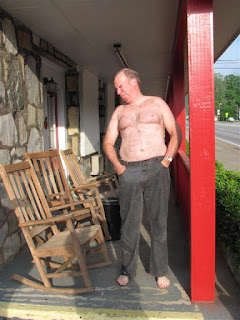 Stonewall at his best
The four of us walked the half mile to Country Vittles restaurant. We joined Don and Sherm's breakfast table already in progress. Country Vittles menu has a lot of very good a la carte items or you can order the all-you-can-eat-family-style breakfast for $7.95 a head. This is where they basically bring the buffet to your table. Mary and Stewey went that way while Sandy and I had more traditional food. 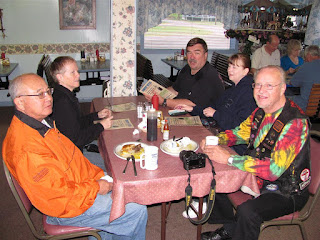 The first breakfast group
As we ate, other VROC people came in. There were a lot of interesting items in the place. One that caught my eye was a fine scaale merry-go-round. I'm not sure if it was a model or a toy. On the way out, I bought an autographed copy of the paperback novel Diamondback. This is the book Chunk told me I should get because it is set in this area, all the places are real and he thought we should explore them. 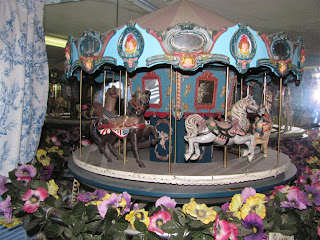 Country Vittles merry-go-round
Derrick was leading a ride to Lake Lure, but we wanted something shortter so we hooked up with Stewey & Mary and Butch & Teresa. We headed south on US 19 towards Cherokee. Part way there, we got caught up in a repaving operation with a wait for a pilot car to escort us throught the several miles of construction.

In Cherokee, we checked out the Dairy Queen as a possible place to wait for the kids on Saturday. Looks like a good spot. While there, we met VROCer Opie from Cuba, Missouri who was passing through town with a couple of friends. We also scoped out the welcome center park at the edge of town as another alternative.

We headed north out of Cherokee on US 441 and, almost immediately, turned right on the very southern end of the Blue Ridge Parkway. A couple of pullouts into the run, Stewey stopped to attach his video camera. We continued on, stopping every five miles so he could reset the camera to keep the video files form becoming too large. Eventually, we had enough stunning footage and he took the camera off. We rode the BRP all the way to the highest point (6,053 feet above sea level) where we stopped and considered our next move. 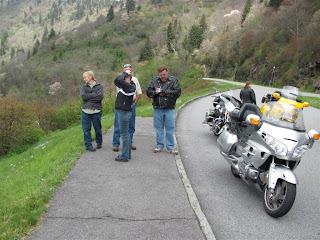 A scenic stop on the BRP 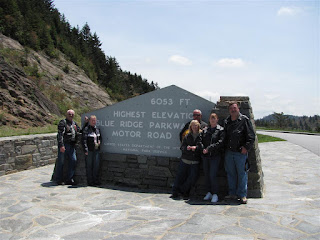 The group at the highest point on the BRP
Me, Sandy, Butch & Teresa, Stewey & Mary
Discretion took over and we realized that the original plan to ride up to US 276 was probably a little bit ambitious. Instead, we headed back down the Parkway to US 74 and on into Waynesville. Sitting at an intersection, we heard some beeps and whistles. I wondered who was upset at someone's driving until Mary saw Sherm and Don going the opposite direction.  We finally found the BBQ place Stewey was looking for. 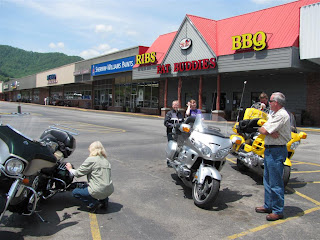 Fat Buddies BBQ, Waynesville NC
I had BBQ beef and Sandy had a pulled pork sandwich. The server was very pretty but managed to screw up the side orders. We didn't have any doubts about the cleanliness though. 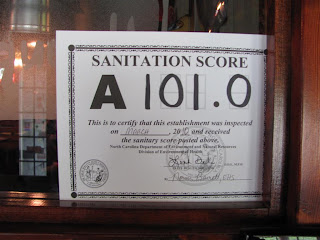 Fat Buddies Sanitation Score
After lunch, we rode back to the Applecover where a lot of new people had arrived. For those who hang out in the VROC Debate group, I got this landmark photo. 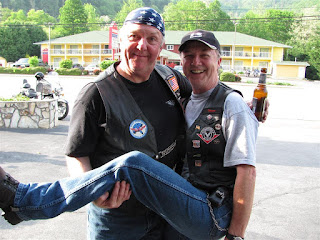 Talon & Nomad Daddy
We spent some time catching up with the new arrivals until about 6:30, when it was time to head down the road the Smacker's, the restaurant where the Meet & Greet was being held. The food was good but they hadn't laid on enough staff so the service was on the slow side. That shouldn't have happened because Jax had made prior arrangements with them for a group of 55. We were slightly over that at 66 by my count. 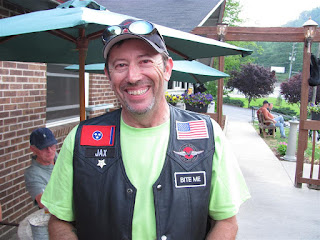 SEVROC organizer Jax
We got back to the Inn about 8:25, just in time to see the second half of Survivor. I know, we watch too much reality TV. Afterwards, we met a few new people including Van, who was showing a damaged steel oil gear. He told me the story and that he was waiting to meet Judge, the master of oil gears. 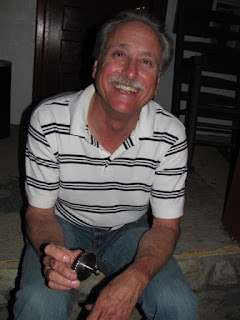 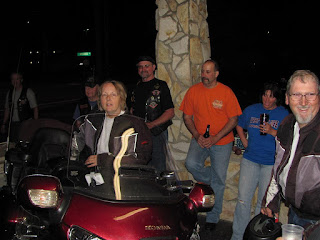 Willie Wonka and The Lovely Carlene arrive
Later in the evening, as the larger part of the card started to drift off to their rooms, a few of us from Debate settled down and had a discussion about the issues of the day. They tell people that people don't talk politics at VROC events but that isn't true. But those of us who do it don't advertise the fact. Talon, Jax, Flip and I, along with two gentlemen who shall only be known as Bob, solved all the problems of the world. Finally, Talon, Flip and I found we were the last three still up and wandered off to bed about 1:30 AM.

I was concerned about Heather & Tom since they were supposed to leave Waterloo after work and ride to Windsor. I didn't get any phone calls, so I sent an Email asking what was up. No reply as of bed time. But I will go under the assumption that no news is good news.

The highest point of BRP brought back memories!

I saw on Heather and Tom's blog that they made it safely to Windsor. I'm glad they made it there safely; the weather they rode through was terrible!