The day dawned with blue skies and significantly warmer temperatures. The weather radar showed the big system that had terrorized Oklahoma was due west of us and moving northeast. Locally, there were some scattered showers.

We left at 8:00 AM heading down US-19 and on to I-77. Jim and Katie would follow later in her Jeep. After a quick breakfast stop in Princeton, we crossed the Virginia Line under the East River Tunnel and, on Jim's recommendation, we took the Rocky Gap exit to Va 61 west. This is a nice winding road through a valley with very little traffic.

Near Tazewell at Frog Level (you have to love the names down here), we headed south on Va 16, a road I have wondered about for a while. It looked challenging on the map and it was. Between Tazwell and Marion, Virginia, it crosses three lines of mountains and each section up and down was more challenging than the famed Dragon. One thing I noted was how friendly people were. We stopped at one spot and everyone who drove by waved and smiled. 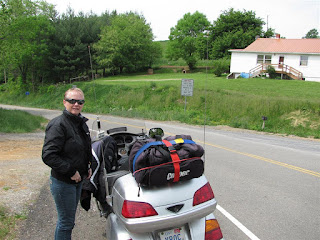 Stopped on Va 16
In Marion, we joind I-81 and headed west into darkening clouds. About twelve miles from Abingdon, Va, it started to spit rain. This got heavier as we went along and, as we pulled into the familiar Abingdon McDonalds, it started to get serious. Mickey D's now has free WiFi so we ate lunch and looked at the radar. It looked like the rain was confined to the I-81 corridor. 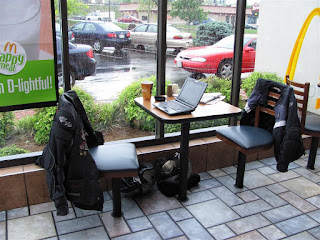 Our Abingdon office
After an hour and a half, the fine rain let up and, after drying the bike seat, we headed south an Va 75 into Tennessee. My plan to ride US 421 (The Snake) was left for another day since the pavement was wet and we were behind schedule. We opted for the direct route to Maggie Valley via US 421 to 394 past Bristol Motor Speedway and US 19 to Johnson City.

Going into Johnson City, we stopped for gas and were engaged in conversation by a nice gentleman named Richard. He was a 64 year old retired mechanical engineer who lived nearby and was wondering how he could invest in Canadian currency to protect against the inflation of the US dollar he felt was coming. A very nice man.

Continuing on, we ran south on I-26 over the ridge into North Carolina. The top of the ridge had some cold rain, but this quit as soon as we were on the other side. 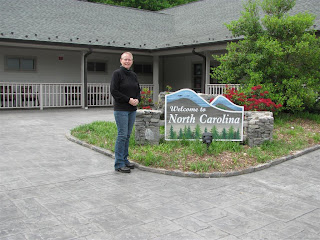 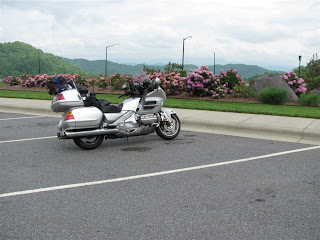 The NC Visitor Center on I-26
We stopped at the Visitor Center briefly and then continued down around Asheville onto I-40 and over to Maggie Valley where we found Stewey, Stonewall and their wives, both named Mary. Wompus was also present as was TBone. Don (VSP) and Sherm arrived from the west coast a short whike later in Don's Toyota.

After checking in, we unloaded and hung out for a while before wandering down to J. Arthur's restaurant for supper. I had a nice (but expensive) filet mignon with (take note, Brother Bear) Bearnaise sauce. Sandy had the deal of the night with a very inexpensive but satisfying half rack of ribs. 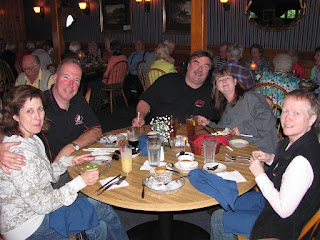 The gang at J. Arthur's
After supper, we came back to the Applecover and stood around with Derrick (the owner) in front of the office visiting. Jim & Katie finally arrived in the Jeep and, after dark, Lucky Al and a friend rolled in from New Jersey. Sandy, Stonewall's Mary and I watched the Idol vote-off show and Crystal is continuing on to the final three.

I hit the sack before 11:00 PM, tired after an interesting day.