It's Friday and we've been home since Monday afternoon. Tuesday set another hot temperature record and we didn't do anything except make a dent in our TV backlog.

Wednesday got interesting. The toilet in the upstairs bathroom developed a serious leak where the tank meets the bowl. I called Mike, our friendly plumber, and he came straight over. The fixture was so old the bolts tripped and we decided to get a new one which I picked up at Plumbing Warehouse. Mike installed it and, once again, proved why a simple job I should have been able to do myself, wasn't so simple. While soldering a new shutoff valve in place to replace the one that had seized, the 90 degree fitting inside the wall sprung a leak. Not wanting another hole in the wall, he rerouted the pipe from downstairs and we were good to go. Then, because we save jobs up until we really need him, he also fixed a leaky bathtub faucet and installed a new shower head.

While all the plumbing was going on, I told my six year old desktop computer it was OK to execute the Windows updates. When it restarted, all I got was the Blue Screen of Death. No matter how I tried to reboot, Safe Mode, Last Good Configuration, whatever, the BSOD kept coming up. No big loss, really, because it was old and tired and only held my backup files, but it was inconvenient and yet one more sign I should have stayed in bed.

Mike wrapped up and left in his plumber's van while I was pricing new and refurbished computers. I know that I will have to upgrade from XP to Windows 7 some day, but I wasn't really looking forward to the experience this soon. I forestalled that dreaded task when I discovered I could hook the monitor, keyboard, mouse and printer up to the little ASUS Netbook and Viola (whoever she is), I had a perfectly functional ersatz desktop. It will do until something better comes along.

Thursday, I paid all the bills and reconciled all the accounts, a task I really enjoy. Really. Then we took the old plumbing junk to the dump and I picked up a new two terrabyte USB hard drive to keep my irreplaceable data backed up on. I copied over my music, photos, book and data files and, after checking the disk usage pie chart, realized how big two terrabytes is and how little data I actually have. Oh well, better than the other way around. I made it to my quarterly appointment with Mark, my friendly family doctor, who told me I would probably live for another three months and froze a wart off my big toe. Then I went for lab tests that should have been done before the visit to the doctor but, because the appointment was moved ahead five days, I hadn't rushed to do. He wouldn't have had the results of my A1C in time for the appointment anyway. I'll call him next week for the magic number.


Back home, I settled in and out another dent in the still sizeable TV backlog.
This morning, I was up early riding to R&L Equipment in Verner to get the bike serviced. New tires (the rear was down to 1/32nd after 27,980 kms), brake pads and final drive oil were on the list. I will replace the engine oil myself this weekend. I found out the clutch switch problem causing the cruise control to work intermittently was because the pivot point and bushing for the clutch lever had simply worn out over 200,000 kms. I wonder how many times I have actually squeezed it over all that time? While they worked on the bike, I sat in the comfortable waiting area and caught up on my blogging. I also read some articles in Motorcycle Mojo magazine by Paddy Tyson, a crazy irishman touring the USA on an Aprilia. This guy is a hoot and has a funnier turn of phrase than many successful comedians.

I had lunch at the restaurant a cross the road and, soon after, the bike was ready to go. There is now a brand new silver Wing on their showroom floor with no clutch lever since, because they didn't have the parts, they raided it to get me on the road. Thanks to Sevice Manager Jim, Dale on the counter and wrench Marc for getting the job done. 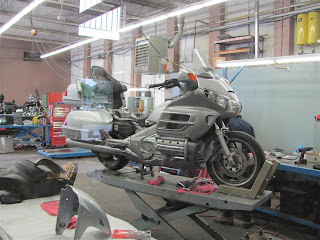 The Wing getting some TLC on Marc's lift
The ride back home was straightforward although the bike felt a little more responsive because of the new round profile tires. As they wear, the rear flattens out. I also took it easy while the slick mould release compund wore of the new rubber and broke the new brake pads in gradually.

There is still a lot to get done before we leave next Wednesday but I expect we'll get through the chores.
Posted by Jim "Skid" Robinson on 5/28/2010