We were up by 7:00 AM. Heather called to say they would be leaving Richmond Kentucky by 8:00 and expected to arrive in Cherokee by 1:00 PM. I decided we would be at the meeting place by noon just to be safe. Having kids riding is a mixed blessing because of the worry factor. On the plus side, the weather was looking promising. 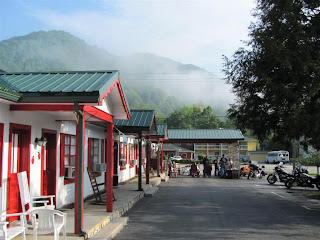 Why they call this area the Smokey Mountains 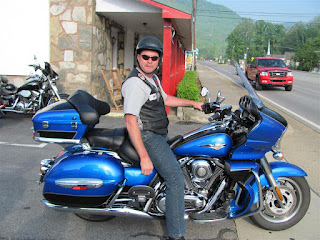 Chuckster takes Keith's Voyager for a spin
We walked down to Country Vittles again and ate with EZ, Crystal, Sterling & her new husband Cody and Keith. We haven't seen EZ and Crystal in way too long. On the walk back, I realized that walking to a late breakfast isn't such a good idea. The sun is much higher and, with the heat and humidity building, it is way too oppressive.

When we got back to the room, we found a bag with bananas and tangerines left by Butch and Teresa along with a note thanking us for letting them tag along on our rides. I can assure them that the pleasure was all ours. They are fine people and I'll be glad to share the road with them anywhere.

I checked the tire pressures again. They were still over pressure at 40 front and 44 rear compared to the proper pressures of 38 and 41 respectively. Higher altitude causes increased PSI. Although I didn't drop the pressure yesterday, I did today. Over inflation isn't good for wear on the centre of the tire which, on the rear, doesn't have much tread left. I will have to add more air back when we back down lower.

We left for Cherokee about 11:15. Riding down US 19 and onto the BRP, there was no traffic until I came upon a jeep pulling out of an overlook. No problem, it was Wrong Turn and KT. We stopped and chatted for a minute before continuing on to Cherokee where we stopped for ice cream at the Dairy Queen, our secondary meeting spot.

After a while at the DQ, we decided to move down to the Visitor Center. Sandy found a shady bench near the river with cool breezes rippling through, a major plus on what was otherwise a very hot, humid day. 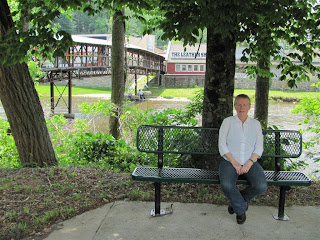 Sandy sitting in the shade
I had told Heather and Tom that when they came into town on US 441, the first thing on the right would be the VC. If we weren't there, continue on and we'd be at the DQ. After a long wait, about 1:45, we saw what appeared to be the kids turn left just before the VC onto  Big Cove Road. It turns out Tom had put the DQ into his GPS. The only problem is that there is more than one DQ in Cherokee and his was a different one. Eventually, they made their way around and appeared from the south. They had gotten hung up in traffic a few places along 441 which made them a little late. 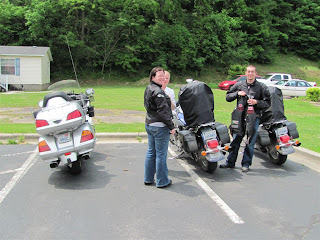 Successful rendezvous
After a quick reprise of the DQ experience, we took the BRP back to US 19 and Maggie Valley. I set an easy pace because I remembered back to my first experiences on roads like this. On the way over, we met a gaggle of Miatas going the other way in a spirited fashion. Once on 19, we raced the clouds to the bottom of the hill. A few light raindrops hit us within sight of the Applecover but it didn't get serious until four minutes after we were safely parked. Talk about lucky.

After wandering about for a while, the supper bell rang. We had a choice f chicken or pulled pork sandwich along with several sides and a chocolate brownie. 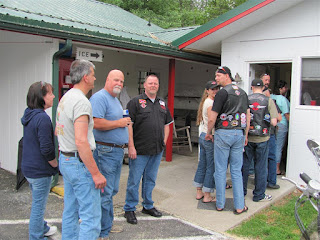 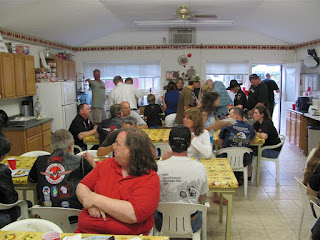 In the dining hall 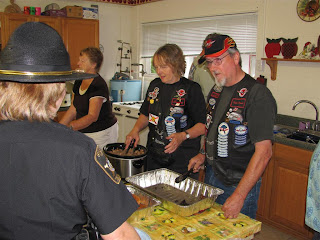 The Lovely Carlene and Willie Wonka serving
After supper everyone settled in for the raffle. There were many items donated by Kawasaki, VROC members and supporting businesses. We managed to win a Kawasaki blanket and bear, some coasters, a travel mug and two bottles of (thank you, Blondy) wine. At the end of the raffle, they pulled the 50/50 winning ticket. The other half of the money was presented to Sherrif's Deputy Heidi in support of the local D.A.R.E program, which counsels school kids about the abuse of drugs and alocohol. 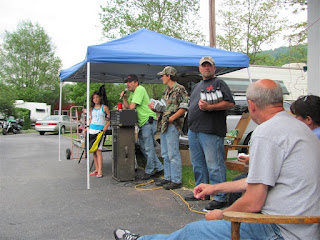 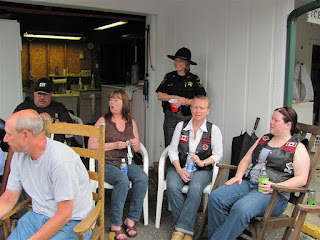 Waiting for the numbers to be called 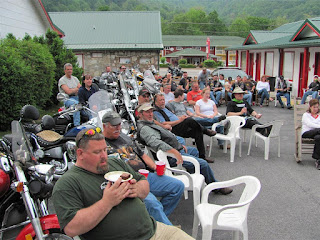 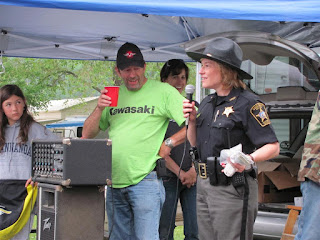 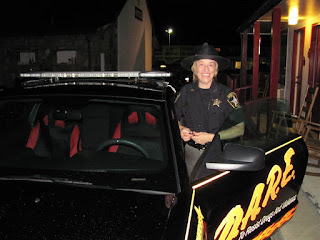 Heidi's new Mustang patrol unit
Somewhere after the raffle, we got my old Baker Wings installed on Stewey's bike. It only took a few minutes but they will hopefully give Mary less buffeting on the back seat.

The final evening of any rally is usually pretty mellow. Many of the gang sat around in rocking chairs reminiscing and planning at the same time. Sandy and I finally turned in about midnight. 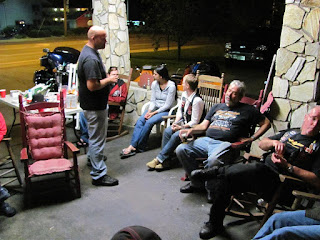