Today was the 39th anniversary of the wreck that earned me my nickname permanently. I had been riding just over two weeks when I ran my 350cc Yamaha R5 into the back of a parked car at close to 40 MPH, putting myself on crutches for six weeks. This ensured that when my boss had called me "Skid" two weeks before, after a minor laydown, it stayed with me forever.

The radar showed the big green rain system leaving, heading northeast. It was good that it had left but unfortunate that it was going the same way we were. There was a big green blob on the radar map all over I-81. We had to pay for the breakfast in the sports bar. This, combined with the high room rate, pretty well ensures that Doubletree is off our most favoured accomodation list.

While I was checking tire pressures and drying the bike off, I talked to a young BOA bank fellow from Buffalo who was down for a few weeks training a local startup operation that would be looking at mortgage modifications. It surprises me that this late in this program, there are still places that are just getting going with it.

We left the hotel at slightly after 8:00 AM for the short ride to Bristol Motor Speedway. we parked at the new office building and waited for the gift shop to open at 9:00. When it did, we paid our tour fee and a nice young lady named Sandy loaded us in a van for a private tour. This included a run down the drag strip (we hit 58 MPH) and a visit to Bruton Smith's private suite. We couldn't circle the track because of the heavy construction work going on in the infield. Sandy and her husband ride a Suzuki C50 Boulevard just like Heather and Tom. 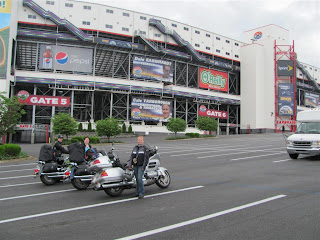 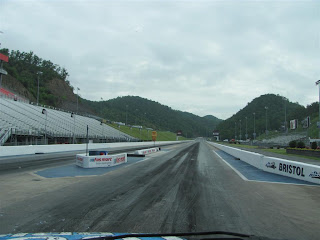 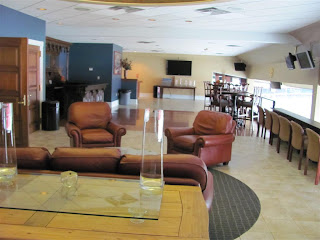 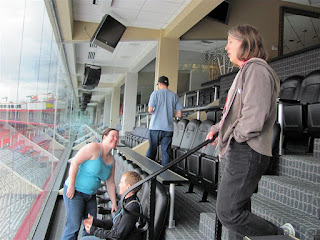 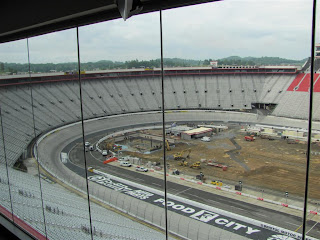 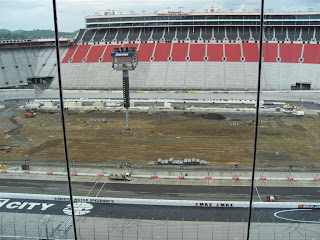 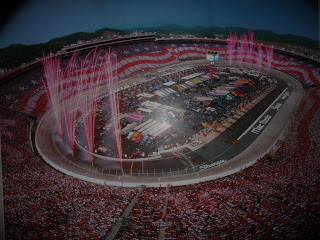 Sandy got this picture of a poster outside Bruton's suite 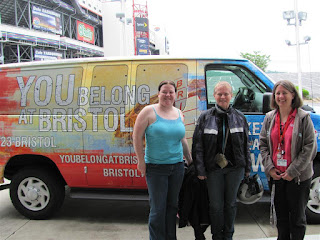 Our tour guide Sandy
The weather looked better to the west as we left the track about 10:00 AM. We took the usual route along Tn 394, US 421 and Tn 44, which turned into Va 75 after we crossed the state line. In Abingdon, we caught I-81 and headed east. Near Marion, the temperature dropped, the winds got quite gusty and then it started to spit a light mist on us. We stopped at the McDonalds at Rural Retreat and had lunch while checking the radar using the new, free Mickey D's WiFi. It showed that the heavy rain had moved off to the east of I-81 so, while the kids suited up, Sandy and I didn't. 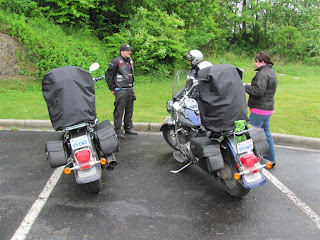 Suiting up in Rural Retreat, Va
Continuing on I-81, things went well foor a while except for a problem I was having with the cruise control kicking out. I suspect the clutch switch, an interlock device in the cruise control circuitry, may be sticking. Near Christiansburg Va, the mist picked up and we started to get some sever road spray so I pulled of at a gas station where a number of bikes were taking shelter. 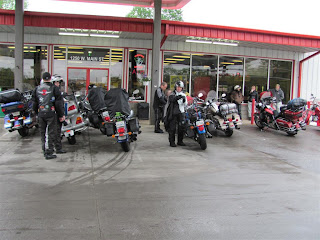 Bikes hiding from the rain
We met two older HD riders from Tucson Az who were retired corporate pilots. We talked planes and bikes while Sandy and I suited up. There were also a couple on another Harley and a VW trike rider trying to make it home to Roanoke. They left as the rain eased and we were on the road again shortly after. The steady rain picked up once again and we passed them sheltering under an overpass.

I hate I-81. Traffic is heavy and it seems one truck doing 66 MPH is always trying to pass one doing 65. The hills in this area mean that before the pass is complete, we start an upgrade and they both slow down. Add the steady fine rain and this was not a leg that was much fun.

It was still raining and 13C when we pulled into the lot at the Natural Bridge Hotel. After checking in, we hung the rain gear in the bathroom to shower and unwound for a bit. The museums closed at 5:00 PM so we decided we would see them at 10:00 AM tomorrow before leaving. We planned to catch the Drama of Creation light show at the Bridge at 9:00 but it was cancelled due to technical difficulties. Just one more thing we have jinxed along with the pools. Instead, we walked down to the Bridge before supper. 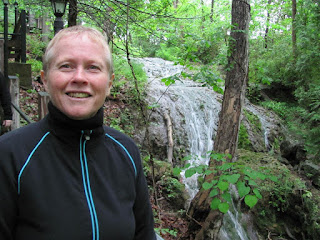 Sandy on the stairs to the Natural Bridge 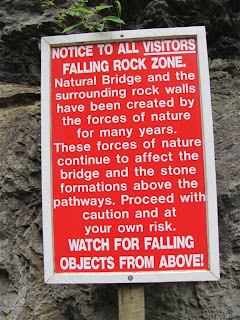 Keep an eye out 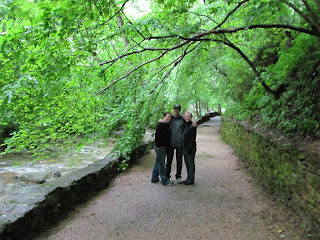 The gang along the little river 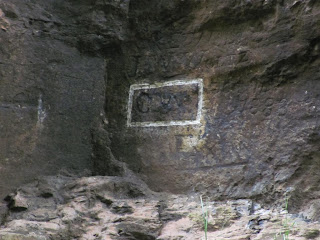 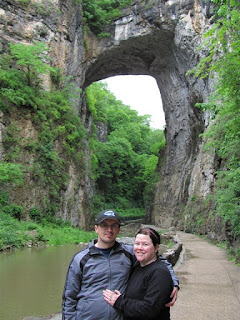 Heather and Tom at Natural Bridge 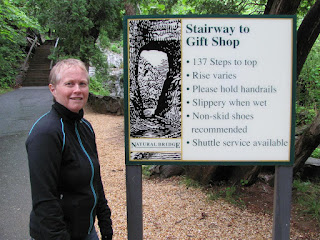 The 137 step climb was our exercise for the day
At the Red Fox Tavern, adjacent to the Colonial Dining Room in the hotel, Faye served us a light supper and then the four of us shared two huge apple cobblers. We talked to two retired gentlemen who were taking a day off from hiking the Appalachian Trail. One of them was quite familiar with Vale and the mining industry while the other had been in mineral processing. 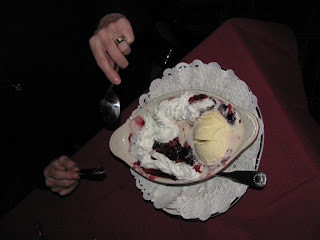 Natural Bridge Hotel Apple Cobbler
After supper, we covered the bikes and adjourned to the room to watch Dancing With The Stars. It must have been a tiring day because Sandy and I fell asleep before the end of the show.

Keep the road under your butt ride safe have a blast see yall when you get back.