We were up and loaded early. I had packed the side bags yesterday so the process went quickly. It was 15C, and cool with patches of fog as we headed out shortly after 7:00 AM. 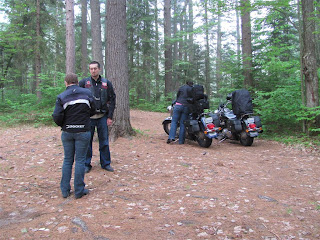 Ready to go
We rode the first two kilometers with the kids. Then, at Highway 62, they turned left for their trek back to Waterloo while we turned right to head for Sudbury. We stopped in Barry's Bay for fuel and found a group of Quebecois sport bike riders gassing up as well. The winding back roads around here are some of the best Ontario has to offer.

From Barry's Bay, we headed west on Highway 60 with only a few patches of lingering fog. In the village of Madawaska, we could see the impact of the low snowfall as the Madawaska River was so low the dock pilings were exposed and more. It is going to be a long, dry, nasty fire season. 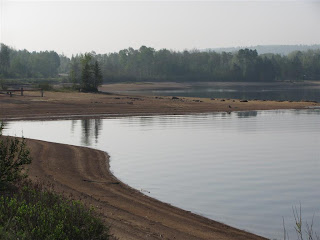 The docks are high and dry in the Madawaska River
Continuing on, I got a nasty scare on the way to Whitney. I wasn't in Algonquin Park yet so my moose sense wasn't on high alert. In fact, I have never seen a moose along this stretch so I was wool gathering and thinking about what a fine trip this had been. You think a full grown moose standing on the opposite shoulder of the road would catch my eye right away but I was less than 100 feet away when I first noticed it. I braked hard but, due to my woeful lack of attention, the outcome was all in the moose's hooves by this time. She spooked as I came even but, luckily, turned towards the ditch. There was no excuse for this rookie mistake on my part but it did serve to warn me once again of the risks of becoming too complacent.

Through the park, we only saw one other moose down off the road in a swamp. It was easy to spot because there were three cars pulled over taking pictures. Other than that, the ride through Algonquin was uneventful and I marveled at how pretty this part of our province is.

The washrooms (Canadian term for restrooms) at the west gate of the park were closed. This isn't a real good thing on a holiday Monday. We continued on to Huntsville, soon to be the site of the June G8 meeting, and stopped at McDonalds for a bathroom break and a quick breakfast. It was now up to 20C and quite comfortable.

From Huntsville, we headed south for a short way on Highway 11 and caught Highway 141, one of my favourite local roads. We bombed the 60 KPH corners using my newly rediscovered cornering technique of moving up on the tank and leaning forward. This provides immensely better control than sitting straight up and provides much more positive control. Funny how I had forgotten about this, especially since this is how I also handle tight corners on my snowmobile. We did encounter an O.P.P. black and white but I spotted the white roof a long way off. I am very happy that Commissioner Fantino returned to the old (and more visible) colour scheme.

At the Petrocan on Highway 400 south of Parry Sound, we stopped for fuel and ran into old Ontario Federation of Snowmobile Clubs associate Tim West. He has an ownership stake in the new Tim Hortons located there. We talked for a bit and he told me that the four lane highway past Parry Sound won't be opened until the Nobel by-pass is complete in the fall. It seems they have a rule that they can't go from four lanes to two within a community because the drives are too stupid the be able to handle it.

Before leaving, we pulled the panels off the Joe Rocket Alter Ego jackets to get to the mesh layer because the temperature was now up to 26C. These are the greatest jackets I have found because they are good in the cold and yet permit being turned into mesh for hot weather without requiring hardly any storage space for the removed panels.

Two lane Highway 69 had a lot of southbound traffic as the Toronto crowd, who love to escape the city on the weekends, worked their way homeward. We stopped at the French River Trading Post (home of Hungry Bear and the Blueberry Hound) for a short break since it was time for Sandy to walk around and I was getting sleepy. 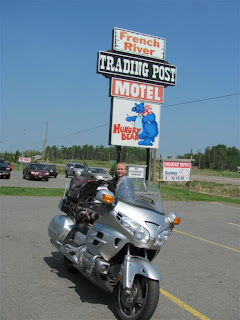 The French River Trading Post
The rest of the ride went quickly and we pulled into the driveway at 1:00 PM as the temperature was breaking 30C. This was exceptional hot for the Victoria Day weekend, especially since we saw snow this weekend for last two years.

After unpacking, I set out to mow the lawn. It hadn't grown too much due to lack of rainfall and even the dandelions were suffering. The stuff in the grass catcher looked more like dust than grass. I left the edge trimming for a later date.

Despite having reduced almost all the PVR recordings to standard definition to save space. the hard drive was still 92% full. All our shows were wrapping up for the season while we were away but we had multiple episodes of almost every one recorded, which will mean some concerted watching over the next week. We have nine days at home before we head west on the Colorado/Nevada trip.