I was up at 6:00 AM. The weather channel said it was -2C but, unlike yesterday, was supposed to warm up quickly. By the time we had packed and loaded the bike, it was 9:18 and the temperature was up to +8. We were fueled and headed out of town by 9:30.

The first day of any trip starts out slowly. The first half hour, it seems like you aren't getting anywhere. Then you settle into the rhythm and, before you know it, the day is done.

For the first hundred miles, there were still snow patches in both sides of the road. Add to that the fact that they obviously salted the highway during the snow on Saturday because the residue was evident on the pavement. I try to avoid salt whenever possible but, this time, there was nothing to be done about it.

Under doctor's orders to stop every hour and let Sandy walk around to prevent a recurrence of the blood clot problem, we pulled into the Moose Lake Trading Post just north of Pointe Au Baril. The last time Sandy was here was before she met me and the last time I was here was never. It has coffee, french fries and a nice little gift shop with lots of interesting things. Outside, they have a wishing well dedicated to Terry Fox. I made a wish and tossed in a coin. Hope it comes true. 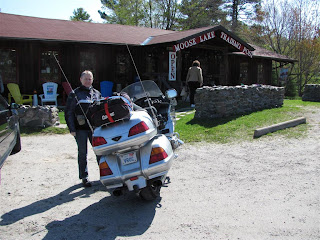 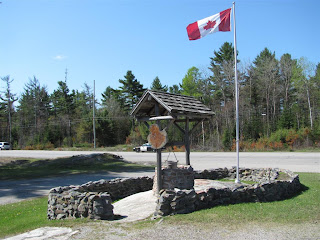 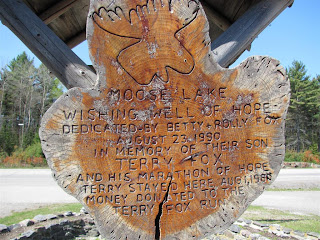 Inscription
South of Shawanaga, a yearling bear wandered out of the ditch a couple of hundred yards ahead of us. I slowed down while noting that this was probably the most laid back bear I have ever seen. He ambled slowly and deliberately across the road giving us a look of disdain as he did. Sandy would have gotten a great picture except that she had the camera settings wrong.

The Parry Sound contruction zone said it would be completed in the summer of 2009. It still isn't done so I don't believe the summer 2010 promise for completion of the new section around Nobel.

Our second stop was about noon at the Derek Roberts Country Store in Waubaushene. We split a Subway meal deal for lunch as Sandy tried to warm her hands around a cup of hot chocolate.

Coming into Barrie, I felt a wave of fatigue wash over me. I managed to hang on until the service centre in King where I slurped down one of my 5 Hour Energy Drinks. This perked me up and I didn't have any more problems for the rest of the day.

We splurged and took the 407 across the top of Toronto all the way to Burlington. The QEW was moving well and, after a stop for fuel and walking in Beamsville, we arrived at the Peace Bridge. For the first time I can remember, traffic was backed up onto the bridge and, as we sat there, we could feel it shake as trucks went by the other direction. Soon we rolled off the bridge and, ignoring the packed plaza, wheeled into the NEXUS lane where there were only two vehicles waiting. After holding our cards up to the scanner, we told the agent where we were going and he wished us a good trip. This was one of the days that I know the NEXUS cards are worth every penny we paid for them. And no questions about the terror list, either. Maybe they caught the guy.

When we took a brief break at the Angola service centre on I-90, I noted that their gas was going for $3.08 per gallon. Yikes. I won't look at any more prices after this. I did note a sign along the road that said NY driver's licences would be suspended after a second speeding ticket in a construction zone. That should get some attention.

At the Pennsylvaia state line, there was an overhead sign that said "Watch Out For Motorcycles". Way to go, Pa! We rolled into the Comfort Inn parking lot in Erie just after 5:30. After unloading, we walked next door to Bob Evans where I had a monstrous chef salad and Sandy ordered a turkey, dressing, mashed potato and cranberry dish from the over 55 menu.

The weather here tomorrow doesn't look good. Showers in the morning will deteriorate into a "soaking" rain in the afternoon with a high of 50. On the plus side, Princeton, West (By God) Virginia will start wet and move to thunder showers in the afternoon with a high of 62. We realize it could be worse after watching coverage of the wild tornados in Oklahoma. Our thought are with everyone there.

A blurb I caught today on the radio detailed a plan the Ontario police chiefs are asking the province to enact whereby police officers would not have to appear in court for traffic citations they issue. The chiefs say a written, sworn statement should be sufficient to reduce costs. I have to wonder what happened to being able to confront your accuser. The defendant can't cross examine a written statement. I hope this goes nowhere because it would make a mockery of the court process.

Tonight, as I type this, we are watching Dancing With the Stars. I expect to be asleep early in anticipation of another great dat tomorrow.

Whenever we travel on the NY Thruway, we stop at the Angola service center. I like the covered walkway across the Thruway.

You were about 1 1/4 hours drive from our house when you reached the Comfort Inn in Erie.