We slept a little late this morning and then walked down to Country Vittles for breakfast. I had grits for the second day but the southerners looked at me like I had three heads when I put more grape jelly on them.

Back at the motel, Willie and I took the Baker Wings off our GoldWing. The plan is to install them on Stewey's bike so he can see if he likes them. I checkeed the oil and tires and found that the rear was down to 2/32nds of tread. This would normally be time to replace it but, based on my experience coming back from Oregon two years ago, I am confident that the Bridgestone will make it home OK. I have an appointment on the 31st at R&L to have both tires replaced before our trip west. The pressures were also high due to the altitude, but I didn't lower them. 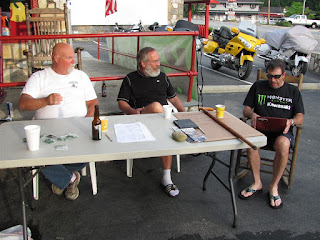 CB, Wrong Turn and Jax at the registration table 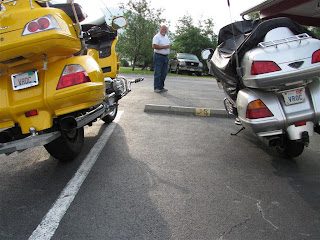 VROC licence plates on non-Vulcans
I got a post from Tom saying they had made it to Windsor, although heavy rain hit them around Chatham. The Comfort Inn there doesn't have WiFi. They will be heading downn I-75 this morning as far as they can get.

Jax was taking a group to Hot Springs NC but we went the other way. 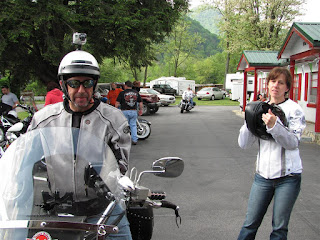 Jax' helmet cam
I led Willie & Carlene, Butch & Teresa and Fox over the BRP to Cherokee, down US 19 to Bryson City and across US 28 to Kickstand Lodge. We saw Courtney as soon as we pulled in and Moe appeared soon after. We had a nice visit. They have done a bit of expanding and improving around the place. 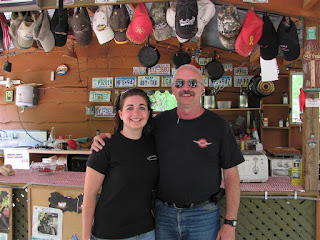 Courtney and I
Sherm told me he was up at Deal's Gap Resort looking for the KSL shirt we had all signed (some of us more than once). We found it framed and displayed in the KSL office. 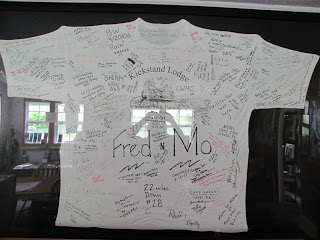 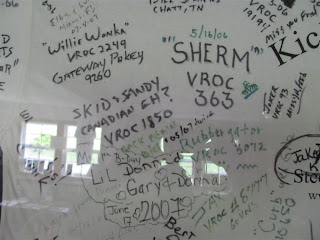 Some of the notable signers
From KSL, we rode the nice sweepers on US 28 up to the Fontana Dam. After the dam, the road gets tighter and so we decided that, running short on time, we would ride back down and take the road over to Robbinsville for lunch. While at the dam, we talked with Jack and Hazel Huckabee, the retired volunteers working in the Visitor Center. The volunteers work two weeks and two couples split the shifts. Jack was a WW II veteran, a mess sergeant for a tank recovery unit. Hazel says he doesn't cook any more. 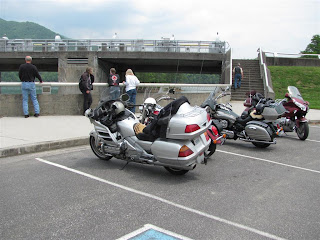 Fontana Dam
In Robbinsville, we had lunch at Lynn's Place. Willie and Fox had real food while the rest of us raided the salad bar. Lynn;s Place, where Sherm though he had lost his cell phone a few trips ago, is of the main road and only gathers travelers who know how to find it. 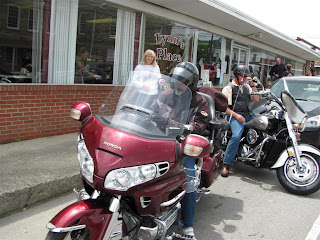 Lynn's Place
From Robbinsville, Willie led us down US 129 to where it meets US 74. We turned left on 74 which winds down through the Nantahala Gorge. Traffic was unusually light. The river is very popular with rafters and kayakers and we stopped at restaurant to watch them for a bit. We met a Nomad rider from Franklin named Merle who had never heard of VROC. He said he might stop by Maggie Valley tomorrow. 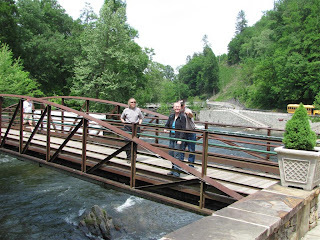 Carlene, Sandy and Willie in the Nantahala Gorge
We contiued on US 74 towards Waynesville, cutting back onto the BRP where it crossed over and wound our way back to the Applecover. The people who track these things say we covered 161 miles today.

We had a pleasant surprise when Cargo showed up unexpectedly. He is relocating from South Carolina toIowa but was back on business driving a rented Camaro. 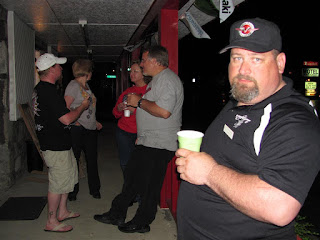 Cargo in all his glory
It was really hot and humid as the afternoon wound down. I tries to help Ol' Phart Joe and Lost Bob plan a route homeward via back roads. I blogged a bit and Heather said they had made it to the Best Western in Richmond, Kentucky where we held the Wandering Rally last year. They would have pushed further but there was heavy rain just ahead.

Bob from Sudbury on his Voyager pulled in just as we were heading up the street to Arf's Steakhouse for supper. Although we had already eaten, he walked there with us and had coffee and pie as we ate supper. I put my hat under my chair while I ate and, of course, forgot it there. Van (who I've decided to call Bad Actor), who was eating at the next table with Tortoise and Judge, saw that and brought it back to the motel for me.

After sundown, we got a hard rain that, when it was done, had cooled the evening and cut the humidity. We socialized in several groups, ours with EZ, Crystal, Keith and a bunch under the overhang in front of our room. They did have the webcams working in front of the office. Sandy and I turned in about midnight but some of the oothers were going long after that.