Time to hit the road again for Wolfman's Wandering Rally (WWR) in Cortez, Colorado (the 10th anniversary of the first world VROC gathering back in 2000 in Durango, Colorado) and High Sierra VROC (HSVROC) in Topaz Lake Nevada. I got most of my chores done but, as usual, didn't find time to clean the bike.

I started packing my gear when I got up. Sandy has been working on hers for days, as usual. We're starting to get into the rhythm because everything was loaded by 7:30. The rain that hit about 4:00 AM as the cold front went through, the first precipitation of significance in weeks, cleared the area about 7:00 and we found ourselves facing grey overcast at 17C. We were rolling 20 minutes ahead of schedule at 7:40 and, after dodging some construction backups, were on te open road shortly thereafter.

The lower cords for both out headsets are acting up. Mine originally was loosing the left ear speaker while the replacement I put in had a dodgy microphone wire. Sandy's mike wire is also a problem. After a while, the little wires in the connectors break. I ordered two more yesterday and will have them when we get back but the long term fix is to spring for Bluetooth headsets that don't use cords.

Our first stop was Tim Horton's in McKerrow, about 40 miles out, so I could get a breakfast sandwich. There was a sizable line up and we got talking to an older couple returning from a golf trip to the Michigan Upper Peninsula. It turns out they were from Aylmer and knew the Koolens, our son-in-law Mike's family. And their name was Robinson. Small world. 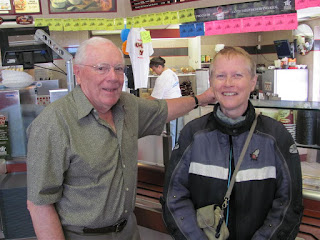 Mr. Robinson of Aylmer and Sandy
There was more blue in the sky as we continued west. The next stop was at the Logger's Memorial in Blind River. I've passed this many times but never stopped. The beautiful statues commemorate the roll played by the lumberjacks in the development of the area. 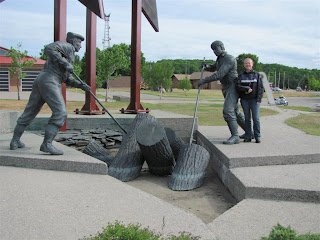 Sandy and the loggers
Moving on, the sky got even bluer and the temperature moved up to 20C. The only think of note the rest of the way to the Soo was a large crane-like bird that walked across the road near Bruce Mines. It was brown with a dark rusty red patch on the top of its head. I searched the Web but couldn't find any pictures that resembled it.

I did ponder how pretty the North Channel shore is compared to the flat boring road along Highway 28 in the Michigan UP. Sometimes we take things right in front of us for granted.

We got to my brother Rabbi's house (formerly Mom's) just after noon and visited for about an hour and a half. Then we headed for the International Bridge to Michigan. During our visit, the blue sky disappeared and we were once again covered by grey overcast,

Bridge crossings in the Soo have been a problem lately due to traffic. No such trouble today as we arrived to find three open booths and no cars waiting. The border agent had more questions than usual including our employment status, how much money we were carrying and the removal of our sunglasses in addition to the usual queries about destination and duration of the trip. Perhaps it was because he didn't have any other customers. In any case, he cleared us, we paid the toll and headed south on I-75 for ten miles before turning west on Michigan 28.

The sky was rude enough to spit on us about half way to Newberry but it had stopped byt the time we got there. While Sandy was in the rest room, an SUV with three elderly gentlemen pulled up. We had a brief discussion and the man I was talking to exhibited the best example of a Youper (denizen of the U.P.) accent I have ever heard.

We moved on another 60 miles on 28 to Munising. Ever since the bridge, we have been able to see the end of the clouds and blue sky to the north. Like the end of a rainbow, we never did get to it. Past Munising, we stopped in a pretty and empty rest area overlooking Grand Island Harbor.

Grand Island Harbor
Then we traveled along the Lake Superior shoreline to Marquette. The lake served to bring the temperature down to 13C. In Marquette, I had targeted the Days Inn on the GPS. I have always ridden straight through here and only now, at rush hour noticed the strange intersections, no left turns, no turns at all and other weird traffic flow restrictions. When we did make it to the motel, after making a U-turn across a median, we found the pool and hot tub were, for a change, working. The second surprise was that they had a special rate for motorcycles, 10% lower than the AAA rate.

We wandered next door to Perkins for supper and then came back and enjoyed a soak in the spa before I settled in to do the paperwork for the day. I hope the spa helps my left lower back and hip, which have developed an ache that goes all the way to my left toes. It feels like sciatica and I hope it is just a transient condition. 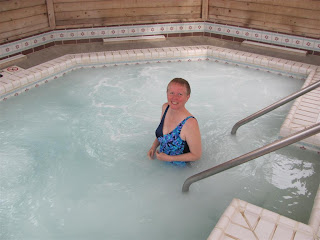 Sandy in the spa
The forecast for tomorrow looks good. The target destination is St. Cloud, Minnesota, another 400 miles down the road. I think I am adapting to these shorter days. We'll see how the rest of the journey goes.