The hotel only had cereal and breakfast bars for the continental breakfast so that's what we made do with. VSP said he would be along later, so Nitelite & Linda and I followed Sherm and Sandy in the truck west on US 50. Remember how I said that a person couldn't miss a turn on US 50? Well, the GPS equipped truck missed a second one, but the mistake was easily rectified. We followed US 50 to Silver Springs where we turned south on US 95. 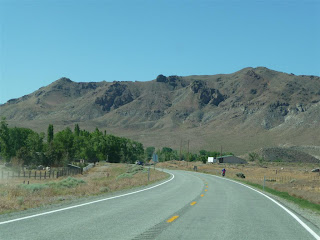 Stark hills along US 50
The road to Yerrington was quiet. From there, we followed Nevada 339 to Nevada 208 and entered Wilson Canyon. Unfortunately, as we did, we caught up to a pickup truck with retired Navy stickers on it. This was one slow puppy dog. I made up for it by dropping back and then running fast through the 30 MPH corners. It was better than nothing but far short of what I was looking forward to. 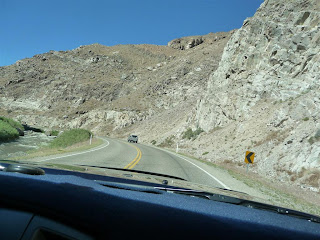 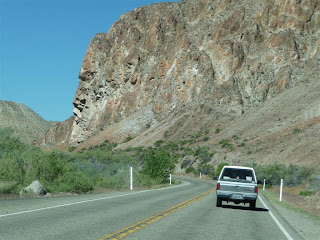 He's still ahead of us
Out of the canyon, the Navy guy speeded up but I decided it was time to put him in my rearview mirror. I led Nitelite past Sherm's truck and the Navy guy in quick succession. We dropped into Smith Valley and then started up the grade on the other side at a brisk pace. Nitelite suggested I was over 100 MPH but I am pretty sure I didn't get above 90. 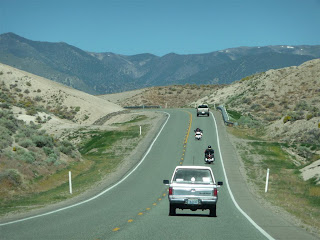 Nitelite and I decide to move ahead 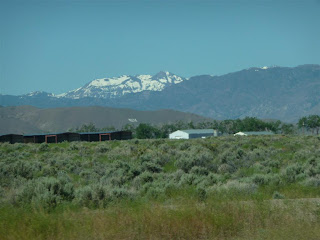 The Sierras from Smith Valley
We stopped to wait for Sherm and Sandy at Holbrook Junction where Nevada 208 meets US 395. When they caught up, we followed 395 south a couple of miles to the Topaz Lodge. We found Sixpack and Rainman already here. They had arrived yesterday via Death Valley. 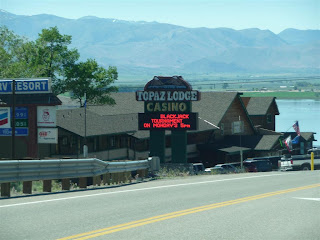 We have arrived
Since we were way early, Sherm wasn't optimistic about the room being ready but, for once, it was. We unloaded the gear and I went back to the office to wait for the Fedex delivery, hoping the new GPS would arrive. The tracking info I received via the world's slowest WiFi said it had been put on a truck in Carson City at 8:38 AM. I was looking north on US 395 towards Carson City when the truck arrived from the other direction. The nice lady had my package and my mood inproved substantially. She was also interested in the seat on VSP's BMW since she has almost the same bike. VSP (who had arrived a few minutes before her) told her it was a Rick Mayer. I took the box of GPS and headed back to the room to open it and get it configured.

A word about the WiFi at the Supper 8 Topaz Lodge. The download was slow but acceptable. The upload was almost nonextistent. Repeated calls to the office revealed they have had their new provider for only a week and they still didn't understand that 0.02 MBPS is almost worse than nothing. We'll have to go to town if we want to post any pictures.