We were awake at 6:00 AM but the planned departure for "The Parade" wasn't until 9:00 so we had breakfast, packed in a leisurely fashion and said goodbye to people who were rolling out for home or parts unknown. Shortly before it was time to leave, we found out that Tinker had broken down just outside town. Mal and I took his Jeep and empty trailer and followed Sherm out to the site. The Stealth Monkey (Tink's ride) would not start so we loaded it on Mal's trailer and returned it to the Super 8. We heard later that there were a couple of electrical issues he managed to fix and got home to New Mexico later in the day. 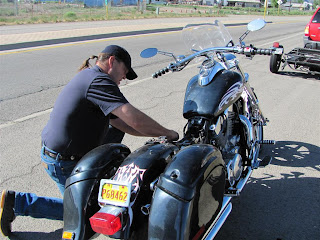 Tinker working on the Stealth Monkey
The planned ride was like this. We (VSP, Cranky, Sherm and Sandy & I) would ride to Kanab, Utah via Kayenta, Arizona. Corvette would take the Jeep and trailer back home to Silt Colorado. Mal, Vinnie & Sami, Clive and Jazz (the two Kiwis) would ride with us to Kayenta and then cut north through the Monument Valley back to Silt. Jamie T, trouble and Maxxx & Mar would ride down through the Monument Valley and meet us in Kayenta. Ham, Rocketgirl and Flying Willie & Leslie, who left Cortez yesterday, would join us in Kanab. Got all that straight? To top it off, Sandy abandoned me to ride with Sherm in his truck.


We headed south on US 160 with VSP in the lead. All was well for the first twenty miles or so. 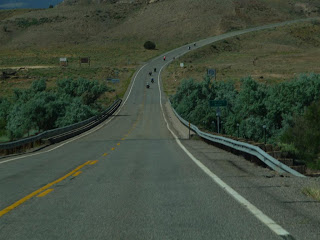 The group Kayenta bound
We encountered our first difficulty at the Four Corners Monument. Don hadn't planned to stop but Vinnie and Clive had never been there before. It took a bit to get Don stopped, but we managed it and returned to the Monument while Sherm and Sandy continued on in the truck. On the way back to the turnoff, I had the Wing up to 100 MPH on the GPS when Mal blew by me at a reported 123. That Connie 14 sure can move. The Four Corners was open but we couldn't access the actual spot because it is under construction. They are moving it from the previous location to the actual spot to keep the GPS users happy. 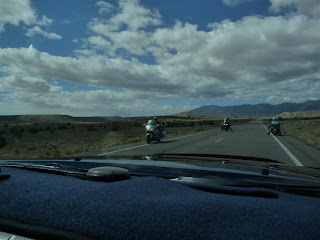 Getting The Parade turned around to visit Four Corners 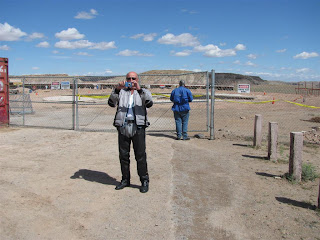 The exact Four Corners is beyond the fence
Back on the road, we continued on US 160 towards Kayenta, which was 120 miles from Cortez. Mal had miscalculated the distance, not realizing that the mileage given by his GPS was as the crow flies. It seems that the Suzuki Intruder Vinnie was riding only had a 100 mile range. I was riding second when we came to a gas station about 80 miles out, so I led the group in for fuel while VSP scouted ahead to make sure the road was safe.

We caught up with Sherm, Sandy and VSP in Kayenta where the rest of us fueled up and had lunch at Burger King. We found out that the Monument Valley crew were broken down near Mexican Hat because Trouble's Drifter had split a rim and the tire had gone flat. Corvette, who was already in Moab towing an empty trailer, turned back to retrieve the bike while Mal and his crew headed north on their planned route which would take them to the breakdown site. We said our goodbyes and a smaller Parade continued on 160.

Sherm and Sandy left first and, as we were getting the three remaining bikes ready, we saw Scotty and Marlene ride by. Hitting the road at a pretty steady 75 MPH, we expected to catch up to them but never did. When we turned right on Arizona 98, Cranky asked if we could slow down a bit so I took the lead and set the cruise at 65 MPH. We had one stop because VSP got something in his eye, and another at Page, Arizona to fuel Cranky's Nomad. 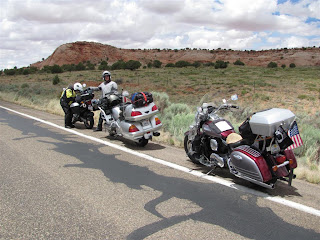 Stopped at the roadside so VSP could rinse his eye 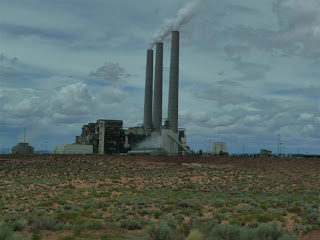 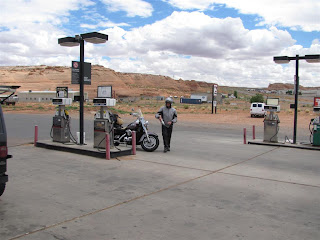 Cranky fueling at Page
While at the gas station in Page, Arizona I was checking the route on the GPS when the touch screen stopped responding. This made the unit about as useful as a paperweight and left me totally lost. It was having problems for some time and I guess this was the final straw. I will have to do something about getting a replacement somewhere along our route.

In Page, we turned north on US 89 and headed up into Utah, crossing the Rainbow Bridge at the dam that forms Lake Powell. VSP was leading now and took us to a BLM Information Center just past Big Water, where they had a display of dinosaur bones. It seems they have actually acquired T-Rex DNA and have proved his kind were the ancestors of modern day birds. They also believe now that carnivorous dinosaurs were warm blooded and feathered while the herbivorous ones were cold blooded. We even watched a fifteen minute movie on the Grand Staircase/Escalante National Monument. 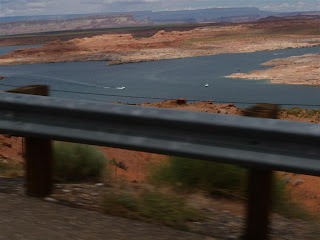 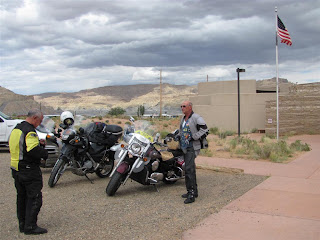 VSP and Cranky at the BLM Information Center 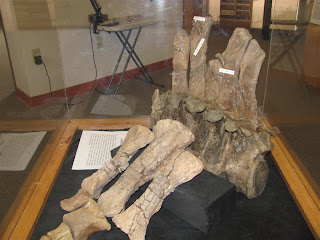 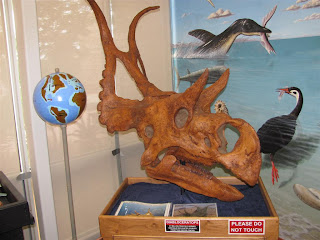 Diabloceratops skull
We phoned Sherm when we came out and found he was just checking into tthe Parry Lodge in Kanab, which put us an hour behind him. We rode on, getting a few spits af rain from an improving sky. We arrived in Kanab at about 5:00 PM and found Sherm and Sandy waiting for us. The Parry Lodge is famous because it was built for movie stars to stay at while they filmed many westerns in this area years ago. Sherm, Sandy and I were in the Ed Faulkner room, a very nice place to be. 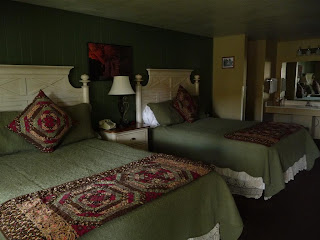 The Ed Faulkner room at the Parry Lodge, Kanab Utah
After settling in, we went across the street to Houston's Trail's End restaurant for supper. On the way over, we saw Maxxx & Mar pull in. They had been on the ill-fated Monument Valley run with Jamey T and Trouble, and had come on alone after making sure help was arranged. At Houston's, Sherm and I had chicken fried steak, which was excellent. Sandy's baby back ribs were a little chewy, but VSP liked his flat iron steak sandwich. 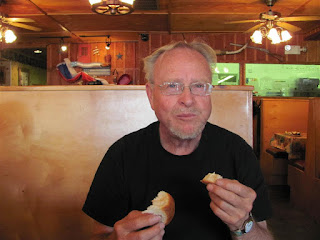 Sherm enjoying a most excellent Houston's roll
Back at the room, Sandy flaked out early while Sherm and I worked on blogs. We didn't hear Ham and company roll in but suddenly their bikes were parked in the lot. It's about 11:10 local time and Sherm has also headed for bed as I am finishing this up. 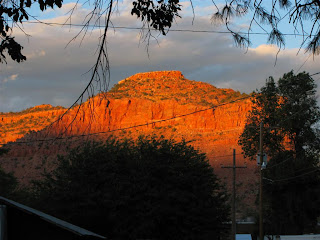 The view from in front of our room as the sun set behind us
Tomorrow, we head for Delta, Utah, a very short leg.

Be sure to check out Sherm's Blog for further pictures.

From all of us here at the Kane County Office of Tourism, thank you for visiting Kanab!
Happy Trails.