We were up at 5:00 AM again. I was feeling quite a bit better and Sherm, Sandy and I jumped into the truck for the short drive to the Red Lion Casino for breakfast. We had the $5.00 meal coupons from the Thunderbird Motel clutched in our hot little hands. Interestingly enough, the steak and egg breakfast special was priced at $4.99 and Sherm and I took advantage of that. Sandy spent less than the limit on a bowl of raisin bran and a fruit cup. The steak and eggs, complete with hash browns and toast was excellent. When we went to pay, the supervisor tried to tell us that the coupon couldn't be used for Sandy's food because it wasn't a full meal. Say what? By the time we got done, she not only took the coupon but also absorbed the $0.74 in taxes.

Back at the motel, the group was getting ready to go. Sandy even tried to help Trouble by giving her back the special custom WalMart seat cover that T had arranged for her to win in Cortez. 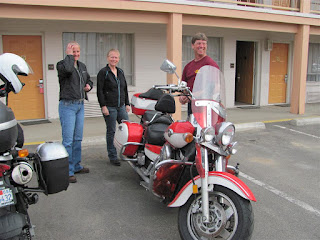 Trouble, Sandy and Jamie getting ready for another fun day on the road 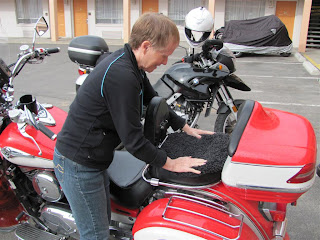 Sandy fitting the custom seat cover
The seat cover didn't get used because, as we stopped for gas, trouble climbed onto the back of the GoldWing and we were off in the chilly Nevada morning. We let Sherm lead onto I-80 west as we headed to Carlin. From there, we headed due south on Nevada 278 towards Eureka, back down on US 50. This road was more interesting than US 93 because it did wind over the hills as we rode past some nice snow covered mountains 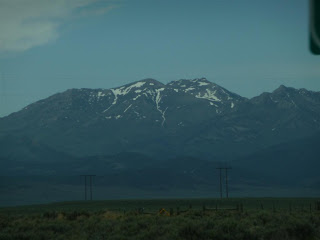 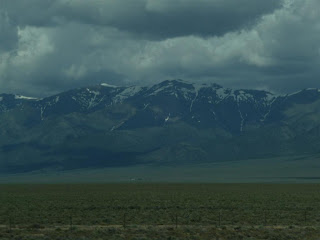 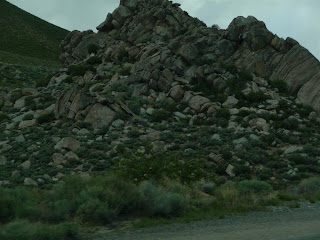 An interesting rock formation
Once in Eureka, we topped off the fuel tanks. We could have stopped at the famous Owl Cafe but it was too soon after breakfast so, after scouting the town a bit, we headed west on US 50. The rest of the gang had beeen complaining about the cold (it was 11C coming through Garden Pass) but I was quite comfortable. Still, I switched to my Thinsulate lined roper gloves for the next stretch. 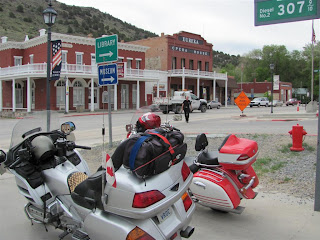 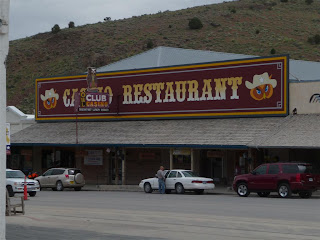 The Owl Cafe
We bucked a headwind going west as we crossed large valleys and climbed up through passes in the various ranges we came to. The most severe climb (and descent)was into Austin, our next stop. Near the summit, even I started to feel the cold and was glad I had put on the heavier gloves. I didn't check the temperature but snow would not have surprised me. After the treacherous twisting descent, a few very cold raindrops fell on us as we entered town so we parked a soon as possible. The rain didn't continue but we found ourselves quite a way from the International Cafe (Est. 1863). Jamie, Trouble and I elected to walk down. This place reeks of character. Sandy and I had soup and split a BLT and fries. It was another excellent meal, just what we needed. 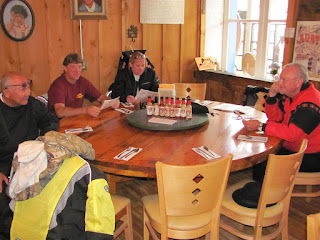 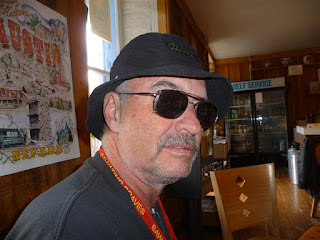 Me, ready for lunch (note mustache growing back) 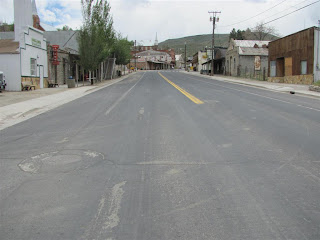 Where we parked (look very closely) 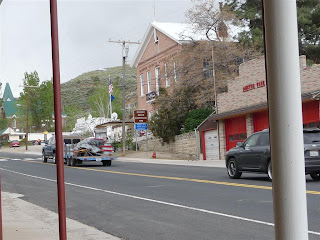 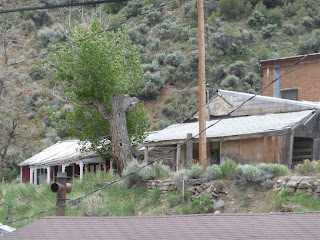 Austin real estate
After lunch, we continued west.  To our left, we could see the mountains getting beaten by weather we had just barely missed. Once again, we dodged a bullet. 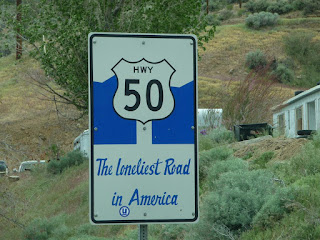 As if we didn't know where we were 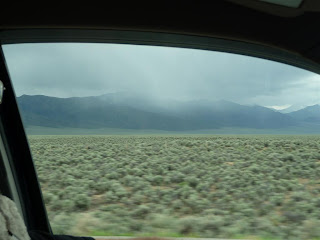 Rain in the mountains
There were more valleys and mountain ranges to cross. Then we came to a dry wash that had some active dust devils spinninng up clouds of sand. These are neat little events that wander through the desert from time to time. 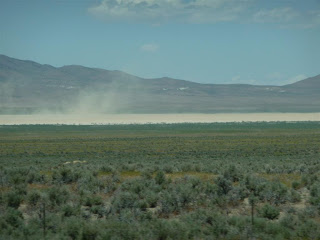 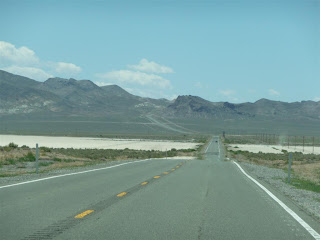 This little one crossed the road in front of us
Eventually, we came to the Shoe Tree. It was easy to see coming up because it is the only tree visible. I don't know what possesses people to throw their shoes up in this tree, but there it stands. There are many more in the ditch below the tree but I don't think anyone wants to down there to retrieve them for another try. As we pulled in, another dust devil blew through the little lot sandblasting us. 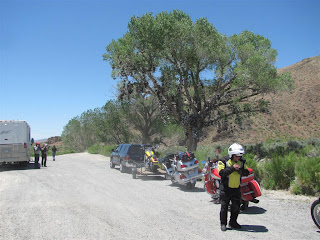 VSP trying to light a smoke in a dust devil 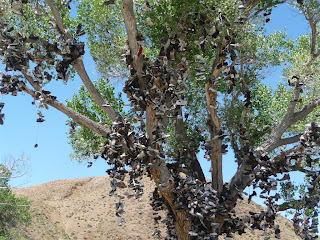 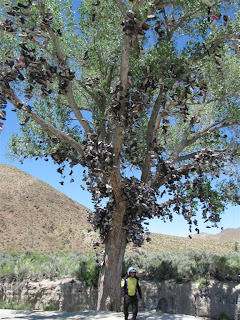 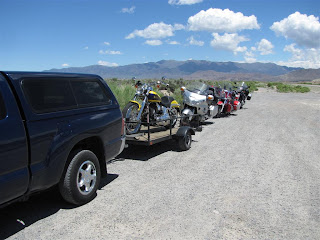 The parade vehicles
Leaving the Shoe Tree behind, we made the last little run into Fallon with the air climbing to almost room temperature. We passed the dry lake bed and the Sand Mountain. We rolled into the Super 8 Fallon (formerly the Bonanza Casino) at 2:00 PM. At the check-in desk, we were greeted by Nitelite and Linda from Petaluma, California, who had ridden over on their 1700 Voyager to join us for the night and the ride to Topaz tomorrow. 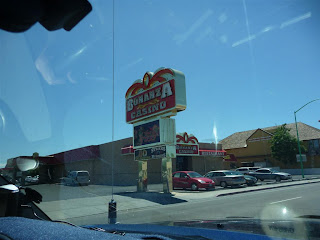 The Super 8/Bonanza Casino - Fallon Nevada
I have to think that, with Super 8 lending their name to Topaz Lodge and casino and the Bonanza Casino, there may be a move afoot to organize these properties. Looks like a good deal all round. This was our least expensive room and yet was still very nice.

We got unpacked and organized and I checked for a confirmation Email on my GPS order. Nothing. So I called GPS City and the gentleman couldn't find my name in the computer. He got Helena, the lady i talked to yesterday, and she couldn't find me either. Seems they had a computer crash last night and I may have disappeared into limbo. She took all the info again and said I had missed today's shipment, making the elivery in Topaz Friday if all went well. Then she called back and said if I could clear the shipping address with Visa, she could get it out today so I called TD Visa (Mumbai branch, I think) and took care of that detail. A call back to Helena and, soon after, I had an Email with the Fedex tracking info.

Before we knew it, it was time to head to the historic Overland Hotel for supper. No tourist will ever find this place on their own but it is a treasure. The well appointed dining room serves Basque family style dining (sense a trend here?) as well as complimentary red wine. We were joined by Brenda and Eddie, local people. Don met Brenda when he visited the Japanese relocation camp site near Delta a couple of days ago. She spent for years there as a child. She and Eddie are archers and bow hunters and Eddie wants to bag a moose some day so I figure we may see more of him.

Supper was excellent. Soup, salad, french fries, bread, Basque beans and spaghetti were the communal dishes. I had a small steak entree (large anywhere else) while sandy had chicken and ribs. I also went a little heavy on the free wine because Sherm was driving. After supper, we spent some time talking outside to Brenda and Eddie before heading back to the hotel. 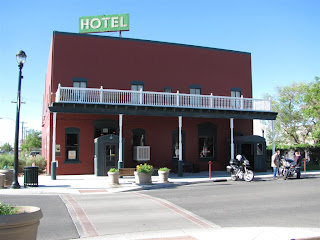 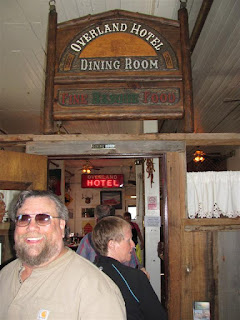 Howard and Sandy waiting to enter the dining room 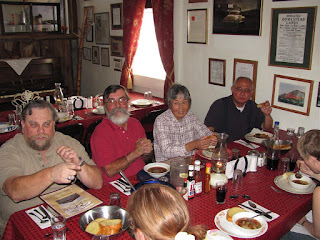 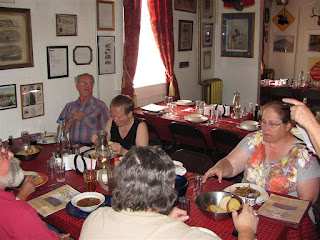 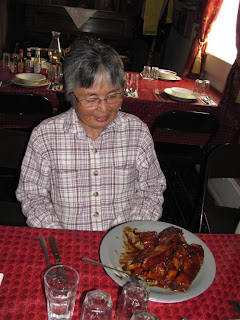 Brenda's rib order
I was going to catch up on some blogging from when I was sick, but it seems the wine put an end to this. I fell asleep before 9:00 PM after writing an IOU to the blog file. 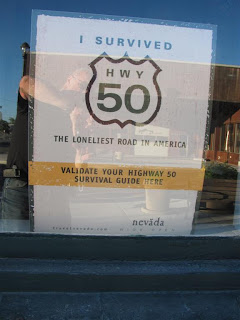