Sandy and I were both wide awake at 4:00 AM. I guess this is a consequence of going to bed too early. A large storm has passed through overnight with the rain ending just as we were waking up. If all the rain comes at night, I won't be too unhappy.

The Super 8 continental breakfast started at 6:00 AM. The young man on the desk wasn't too concerned because he was browsing the Internet while the chairs in the breakfast room were still stacked on the tables and the donut tongs were nowhere to be found. Good help is hard to find. Luckily, by the time we were checking out, he had been replaced by a young lady who was getting everything shipshape.

Our plan for the day was to ride to Gettysburg, South Dakota on the recommendation of our VROC friend Trouble. She and Jamie live in Lead, South Dakota and have a low opinion of the state capital of Pierre, our original plan. I had even reserved a room in Gettysburg (never leave a Friday or Saturday night to chance in case of Little League tournaments or similar hotel filling events). Unfortunately, the more I looked at the map, the more it looked like Pierre (pronounced Peer) was the ideal destination. So I cancelled the other reservation and booked a reasonably priced room at the Pierre Super 8.

We were loaded and rolling southwest on Mn 23 by 7:15. As we left town, we encountered a dark cloud but I had faith in the weather radar. My trust was well placed (this time) as we rolled under it dry and came out to light overcast a few miles down the road. I did note that there are quite a few granite shops on the first stretch. It must have something to do with the local geology.

Western Minnesota is very pretty, some of it flat and some of it rolling hills. All of it is a luxurious green. Much like Saskatchewan, each little town seems to focus on the local grain elevator and railway tracks. Heather and Tom, who take pictures of water towers, would love it here because each little place has its own tower. They are individual structures, not the cookie cutter modern concrete towers that are becoming common at home.

The history of the area is apparent in the old, abandoned homesteads that dot the landscape. You can just imagine the ghosts of the people who settled here, worked hard and raised families when these buildings were new. 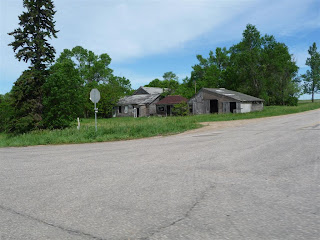 Abandoned homestead along Mn 23
At Mn 23 and US 212, we saw a brand new ethanol plant. I understand these are becoming quite common as the US tries to ease its dependence on foreign oil by turning food into fuel. I'm not sure how effective this will be, but I hate 10% ethanol gasoline because it reduces my gas mileage.

By 9:30, I was becoming extremely fatigued. This usually hits me some time during the day but, after a stop and a 5 Hour Energy shot, I get my second wind and am good for the rest of the day. I planned that stop for Marshall, Minnesota, a thriving town with many new retail businesses, but the road construction was so horrendous that I skipped on through. Luckily, the stop and go traffic perked me up a little bit. I am slowly getting away from my recent decision to avoid caffeine.

In Marshall, we picked up a wasp who hitchhiked riding on top of the air vent behind the windshield. With visions of having him blow into my helmet or jacket if I disturbed him, I let him travel along with us for 30 miles or so until he left of his own free will.

In Florence, we turned due west on US 14, the Laura Ingalls Wilder Historic Highway. I had been wondering all morning about exactly where the Little House on the Prairie books were located and this tells me it wasn't too far. When we arrived in Tyler, Minnesota, we hadn't seen a gas station for over 30 miles. Then there were two, a BP and a Sinclair, side by side. Seems strange to me. The Sinclair had the best looking store, so we stopped there. The young fellow at the counter told me they have been taking a lot of the BP business since the Gulf of Mexico fiasco began. He also told me that last night at 10:30, the storm that hit them was raining so intensely he couldn't see the road to drive home. This was the same storm that hit us a couple of hours later. Good thing we were sleeping.

Just past Tyler, as we approached the South Dakota border, we encountered our second wind farm of the day. This one was massive, stretching for many miles. Unlike many, almost all the turbines here were in service and, with the strong headwind we had, they were turning briskly. The headwind was strong enough to reduce my MPG from 42 to 38. We crossed the South Dakota line at 10:58.

We stopped at a WalMart in Brookings, South Dakota where I picked up some terry towels to sacrifice in the process of wiping the brake dust and crud off my wheels. Sandy also picked up a nice wrap to wear over her bathing suit on the way to or from any pools or spas we happen to encounter. Then we stopped at Perkins for lunch, each ordering 1/2 sandwich and soup combos from the Over 55 menu. It was much better than our usual lunch fare.

Leaving Brookings, the sky was clear in every direction except ahead of us. To the southwest, we could even see some active precipitation. This is like Montana, Big Sky Country, where you can see weather from so far off that you can worry about it for hours. But we stayed the course and kept on trucking at a steady 5 MPH over the limit. This speed may seem tame compared to past trips, but I am enjoying the pace.

Passing through Desmet, Sandy saw the sign for the Ingalls homestead. I though it was on the Minnesota side and now stand corrected. In Huron, we saw the world's largest pheasant. I wondered about places called Huron and Iroquois this far west, because I though we were in Sioux territory. We stopped at a gas station in Huron for a brief break and noticed that now the worst looking clouds were behind us. The are south of us was still, as it was all day long, blue. 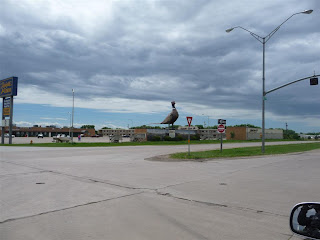 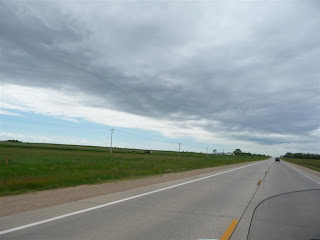 Blue skies to the south
Beef cattle seem to be a big thing here. There were a great many Black Angus herds all along our route. 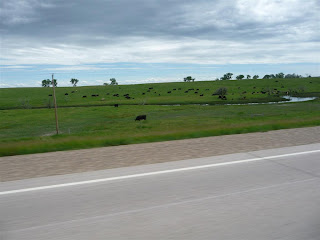 Black Angus cattle grazing
I had to decide on gas. The GPS said Miller was the last station before Pierre, another 71 miles. I should have been able to make it to Pierre even with the reduced fuel mileage and there were probably stations the Zumo didn't know about, but why take chances. Chuck's Rule again, See Gas, Buy Gas. I stopped at a Cenex station in Miller that actually had analog pumps. They also didn't require prepayment. It's nice to be back in the land of trust again.

Entering Pierre, we were struck by the beauty of the green rolling hills and then the stately old buildings in the downtown area. We continued along US 14 to the strip where the Super 8 was located next to a line of other accommodations. There were also many restaurants, mostly fast food with one Mexican place next door. We opted for Arby's, not being in the mood for fancy dining, and braved the 80 degree heat and heavy traffic to jaywalk across the street.  After supper, I looked after my chores while Sandy went to sleep. I imagine she will be awake early again tomorrow.

Usually, I bomb across South Dakota on I-90. I have to say that, if one can spare the time, this is an infinitely better way to do it. The speed limits are mostly 65 with the little towns slowing to 45 with very few traffic lights so it is still possible to make good time.

One positive note over the last two days. My hip pain has been receding as I try to watch my posture. I have a habit of slouching in the seat and I think this is putting pressure on something that is causing the pain.

And now for my rant for the day. We didn't see very many bikes on the road today but several, instead of waving, just lifted their fingers off the handlebar. I can accept this from sport bikes where they need both arms to hold themselves up, but these were cruisers. The effort to wave properly shows respect for the other rider and these guys, all young from the looks of it, probably don't yet understand that respect. Rant mode off.

Tomorrow, we will ride the Black Hills and then head for Jamie T and Trouble's place in Lead for the night.

RE Waving! Remember jim "a nod is as good as a wink from a dead horse"!
Ride safe behave and above all dont get caught!