Sandy, Sherm and I all woke up at 5:15. The early morning sun was just lighting up the red rock to the west and the temperature was perfect. Sherm and I worked on blog stuff while we waited for the rest of the gang to get mobile. There was no rush because it was only 114 miles to Cortez. 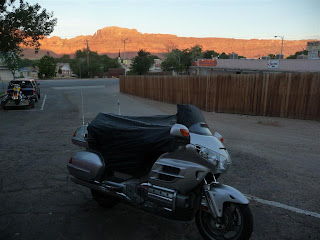 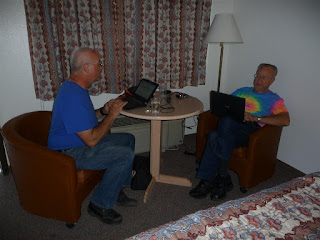 Sherm and I blogging 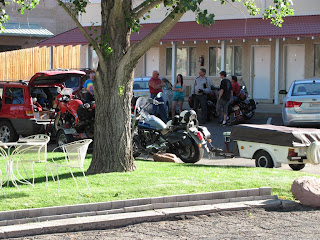 The gang is about ready to roll
Everyone was loaded about 8:30 and we headed downtown to the Jailhouse Cafe for breakfast. Nothing in Moab is cheap and this was no exception, but it was good. Flying (Flaming) Willie and his lady Leslie, along with Ham and Rocketgirl (all from the Pacific Northwest) came in just before we were leaving. 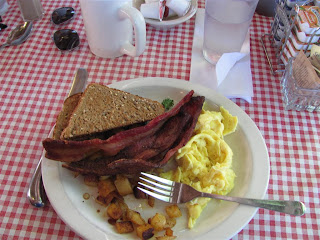 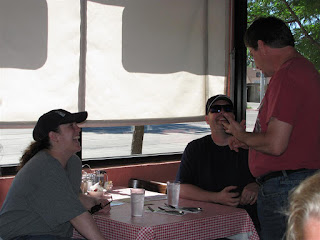 Malachi talks to Rocketgirl and Ham
With Sherm's truck hauling his new Harley Deuce leading followed by Vinnie and Sami in the red Jeep, the crew headed south on US 191. We went a short distance before stopping at the Hole in the Rock, a famous tourist trap. There used to actually be a restaurant in the rock. Now they have a gift shop, zoo and various other items including some very unique metal sculptute. We didn't actually spend anything but had fun poking around. 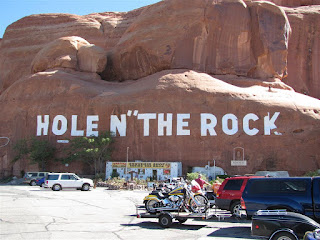 Hole in the Rock - Utah 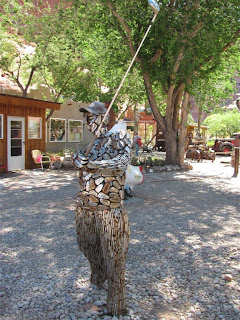 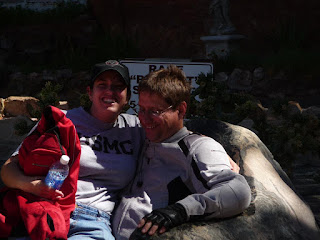 Mal and Corvette in a romantic pose
Sandy opted to abandon me here and climbed into Sherm's air conditioned truck for the rest of the trip. We continued south with the tow vehicles leading along some pretty flat country, although there were a lot of non-flat areas on both sides of us. I used Sandy's headset cord and had no microphone problems so Sherm and I kept up a running dialogue the whole way. We turned left on US 491 at Monticello and rolled into the Super 8 in Cortez at 12:21 PM. 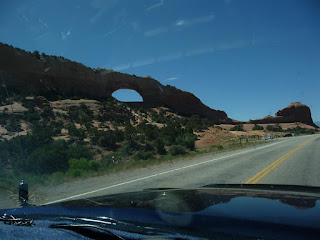 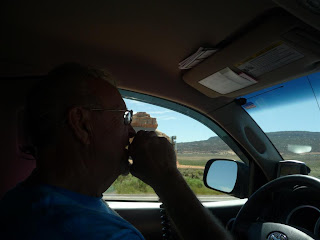