We were awakened at 5:15 by the booming of thunder overhead. Looking outside, it was obvious a major boomer was in progress. I turned to the computer to see how bad the radar said it was but the connection to the outside world was down. Obviously, the storm had taken its toll. The TV was reporting more flooding in the area with talk of tornado watches in some adjoining counties. Not a good start for the last day.

We went down for breakfast and found one of the better ones of the trip. In addition to all the continental items including the do-it-yourself waffles, they had biscuits and gravy. We ate well and the Internet came back up briefly giving me just enough time for a NEXRAD overview. While the storm was moving out of Madison, it was a big semi-circular affair hooking back around north of Green Bay. I didn't see how we would avoid it but we needed to get moving because another cell was headed our way from the direction of Cedar Rapids.

I spoke to a pretty lady with pale blue eyes from Northern Minnesota. She and her kids were headed to visit family in Michigan and Ohio. This was her first road trip in eight years and she had explained to the kids how she needed a road atlas to travel by. Then she left it in a restaurant at lunch yesterday and now, one day out, she was on her second one. I wished her luck with the rest of her travels.

It was 22C at 7:45 when I let the GPS guide me out of the parking lot. The first miscue came when it tried to take me to I-39 as a way to get to US 151. Unfortunately, the ramp was closed and I ended up taking an eight mile detour down I-94. As we finally reconnected with 151, some raindrops from the leading edge of the next cell fell on us. The sky was blue ahead and black in the mirror as I poured the coal to it and got out of Dodge.

I pushed the tank and stopped in Rosendale for gas. The sky was changing so fast I suggested we spoil our perfect record and put the rain suits on. Good move because, as we approached Green Bay, the rain started. It was light but steady as we moved up US 41. By Oconto, it had let up but we kept the suits on as we rode to Michigan and followed Michigan 35 to Escanaba and our own time zone. We stopped at McDonalds for lunch and to put the suits away because it was becoming quite hot. The radar showed the Upper Peninsula was a mixed bag of weather and I couldn't predict what would happen.

From Escanaba, we followed US 2. After the 65/70 MPH limits on two lane roads out west, the 55 MPH Michigan roads are positively slow. It seems that states become more chickenshit about their speeds the closer to Ontario they get. Ontario, of course, is the worst of the bunch and has been lowering limits over the years on all the fun places to ride. Near Manistique, the temperature dropped sharply. Then, about 15 miles from our turn on Michigan 117, the road got very wet very quickly. I hoped against hope but we ran right into some severe precipitation. With no place to hide or suit up, we tucked in and I ran very fast until we got through it, just in time to turn north and stop at Engadine. 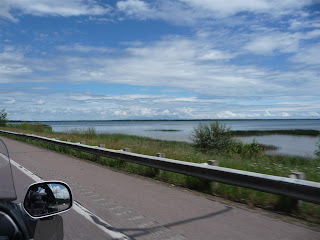 Clouds over Lake Michigan
Looking north, there was another black cloud so we put the suits on again. By the time we were ready to go, the black cloud was nowehere to be seen. As any rider knows, the best way to avoid rain is to wear a rainsuit. We rode north to Michigan 28 and then east to I-75 and the border. Fueling, we got the papers in order. The bridge toll was $3.00 US which, coincidentally, was all the US cash left in my wallet. We waited at the toll booth because one (very cute) girl was handling traffic both ways. Then we waited at Customs on the Canadian side because they only had one booth open. Then they opened a second one and we managed to be third in line. We would have been second but I lost a game of chicken with a Ram 1500 truck. The agent asked a couple of questions, told me my new GPS was within my personal limits, and we were home.

It was after 6:00 so there was no thought of visiting. We beat feet for Highway 17 East and started the last leg of the journey. About now, my taped up microphone cord rebelled. The mike wire started to make contact with something else and we started hearing a feedback howl so I shut the intercom down and we just listened to music.

Near Desbarats, we passed an OPP SUV headed west followed by another SUV towing an enclosed trailer. The second vehicle either had high beams on or the headlights werent't adjusted for the tongue load so I flashed him. Then there was another OPP SUV, a second enclosed trailer hauler and another SUV towing a boat. It appears I probably flashed a member of the OPP SAVE (Snowmoble, ATV, Vessel) Team heading for the Soo for the weekend.

The pavement was wet east of Iron Bridge but the Mississaugi River was very low, unlike the Platte in Nebraska. We stopped at tthe picnic area before Blind River for the mandatory four minutes, and then again at the one beside the Spanish River. 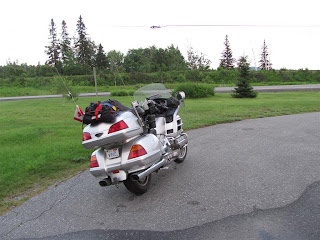 The last rest stop - near the Spanish River Ontario
The skies were darkening as we made the final run for home at 19 KPH over the limit. On the Southwest Bypass, an OPP cruiser made a U-turn in front of me and pulled over a truck. The new lights on the cruiser looked pink and blue in the evening light, not a very intimidating sight. We pulled into the driveway at 9:40 and the bike was unloaded and in the garage within ten minutes. Boy is the grass in my lawn ever long.