When we got up, KC was leading a four bike tour to Columbia, California. Their ride would be over 220 miles and would return via Ebbetts Pass. Having done this from east to west, I know they will be travelling the better direction because they will be on the mountain side rather than the cliff side and the steepest grades will be downhill. Later, Slots planned to take Jamey T and Trouble to Virginia City via Six Mile Canyon, a road we haven't taken yet, with a stop at the notorious Wabuska Bar.

We decided not to ride today so we could catch up on some blogging and get the gear packed for our early departure tomorrow. First, we went over to the casino restaurant with every intention of having the free continental breakfast but Sherm and I got sidetracked by the Topaz Special. It consisted of eggs with ham and Swiss cheese covered with sausage gravy and a side of hash browns. 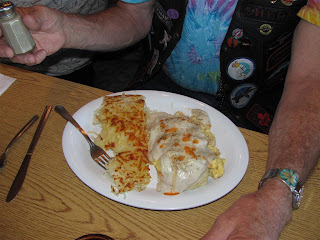 Sherm's Topaz Special breakfast
Somewhere after breakfast, the idea was floated that we needed to go to Markleeville for ice cream. This started to sound like a plan and we ended up with four bikes heading out. I led, followed by Mac Guy and Frances on their red/red Nomad, Cranky and Sherm. We headed south on US 395 across the California border (the inspectors waved us through) and turned right on California 89, the road through Monitor Pass.

BTW, yesterday I was concerned because the audio output on the new GPS seemed low. I fixed it today once I remembered that there is an external volume control. The tunes were now playing the way they should. 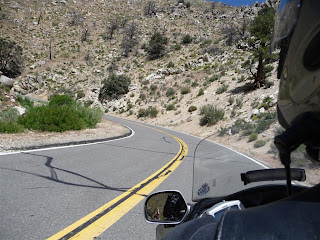 Starting up Monitor Pass
There was a time when Montitor Pass gave me fits. Today, the only problem was an excessive amount of tar snakes that were very slippery when you hit them in a curve. Acknowledging that my traction budget was reduced, I played it a little conservatively. On the way up, we met three four wheeled vehicles that looked like highly engineered soapbox racers tearing downgrade. I met the first one as he was using my lane for the best line in a corner. I don't know what they were but I am pretty sure they aren't legal. The other obstacles on the climb were slow moving bicycles. This seems like a hard way to get up a mountain but Cranky says it is all in the gearing. 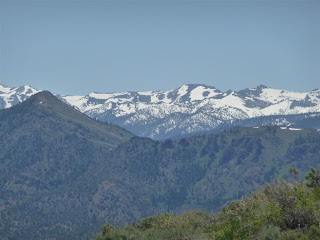 View of the Sierra Nevadas as we climb
We stopped briefly at the crest and, with all the beautiful mountains and valley displayed before us, everyone was occupied photographing a gecko. 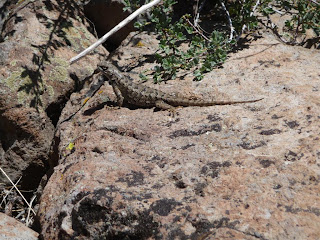 Would you buy insurance from this critter?
We continued up to the pass itself at 8,314 feet and then crossed the high meadow before descending slowly to the intersection of California 4. From here, we followed 89 into Markleeville, a small town that was a destination for a HOG day ride today. We got ice cream at the little shop (except Sherm because they didn't have any no sugar added treats). 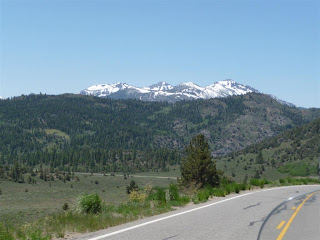 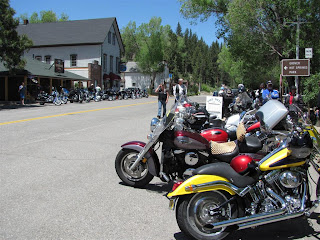 Bikes in Markleeville California
From Markleeville, we continued on 89 to Cali 88, which took us back over the Nevada line where we connected with the same route back to US 395 we took yesterday. At one point, we came to a three way stop with a car stopped going the other way. It was just sitting there so I started to pull out. The lady chose this precise moment to start a left turn in front of me. Mac Guy said she haad been preoccupied reading something, possible a map.

We were back at Topaz about 2:00 PM, just in time for some more Robert and Dorian hot dogs. We returned to the room where I did a little blogging and took a nap until 6:30. Then a group of us headed to the casino to try the Prime Rib Buffet. It was a good feed with the main choices including corn on the cob, fried chicken, ribs and prime rib. It was well worth the price and we toasted the last night of the last HSVROC at Topaz.

Back at the room, I loaded the side bags and checked the tires before milling around the lot with the others.  It was noted by someone as a matter of interest that all the GoldWings (except the rookie KC) parked nose in while the Vulcans backed in.  This appears to be a function of having reverse.  Although it wasn't needed here, Wing riders know they don't need to be concerned about backing out of a space.

About 9:30, we headed to bed while some of the "younger" folk wandered off to the bar.

This was VSP's ninth and last shot at organizing HSVROC. New people have volunteered to take over but will be moving the venue. Thanks, Don, for all the smiles over the years.