We were up at 6:00 AM this morning. The sky was clear but the air was quite chilly. While Sandy and Sherm went over for the continental breakfast at the casino, I got some water and my cloths and wiped down part of the bike. This was such an unusual occurrence that a number of cameras came out to record the event.

Today's ride was a repeat of the one we did the last time we were here. Since I suggested it, I got tapped to lead. I set out a series of routes, one for each segment of the ride. We left just after 8:00 AM with ten bikes and 14 people. I led south on US 395 at five MPH above the speed limit. 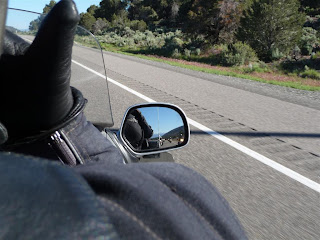 Ride view from the lead 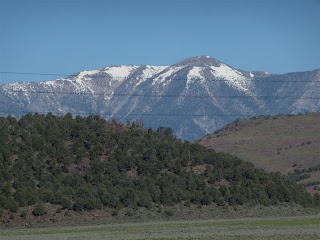 The Sierras in all their glory 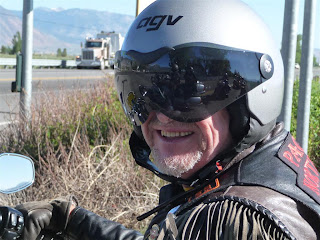 Sherm at an intersection
We turned left on Nevada 756 before Gardnerville and then right on Nevada 206 until we reached the Kingsbury Grade. This is a wide, well guard railed stretch that climbs up into the Sierras taking us to S. Lake Tahoe. It is a beautiful road to climb with proper camber in the curves. Part way up, we saw a Trooper pulled over with a couple of vehicles but it looked more like they had some sort of incident rather than being caught for speeding. At the top, I pulled over to consolidate the group before heading into Lake Tahoe traffic. 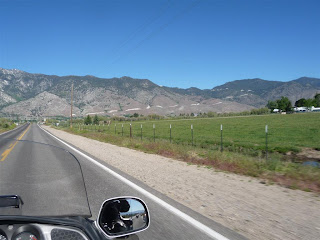 The white line up the mountain is the Kingsbury Grade 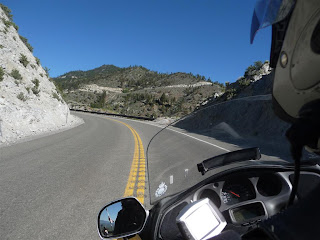 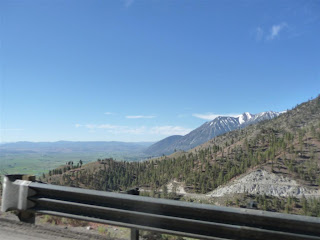 Look back at where we were 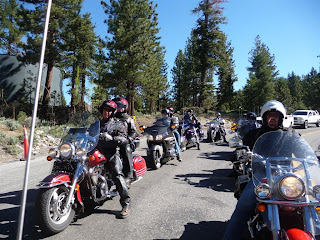 Regrouping at the top of Kingsbury Grade
We rode on into S. Lake Tahoe, crossing a mile or so into California before arriving at Heidi's Restaurant. We had 14 people yet it only took them about five minutes to have a table ready for us. There was a small glitch because Tony D first told them there were only 13 of us. The food and service were excellent as far as what I had or anything I heard about. 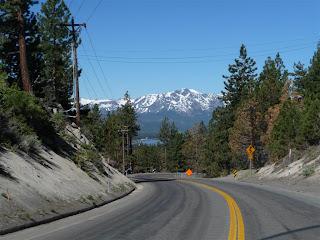 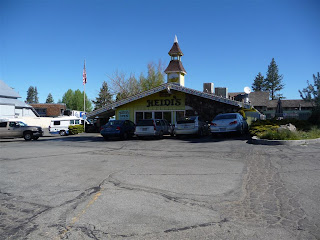 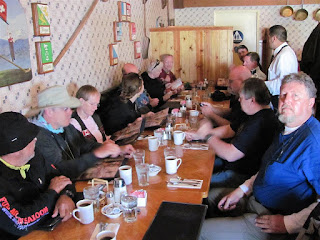 The gang at Heidi's Restaurant 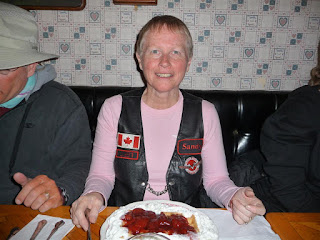 Sandy and her strawberry waffle
From Heidi's, we headed back on US 50, following it and then Nevada 28 up the east side of Lake Tahoe to Incline Village. There, we turned onto the Mount Rose Highway and climbed a curving route to the summit at just over 8,900 feet. There was snow up there and it got very cool. On the other side we wound back down, stopping at a Chevron station just before we crossed US 395 to fuel the thirsty Vulcans. Sandy got another picture taken there with good old Sam Clemens. 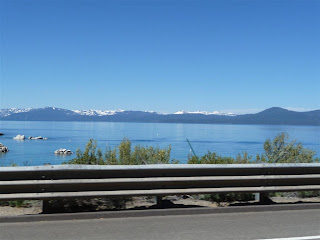 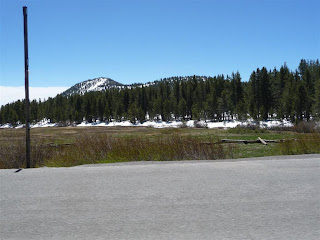 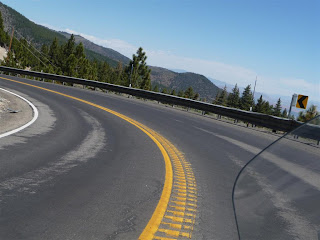 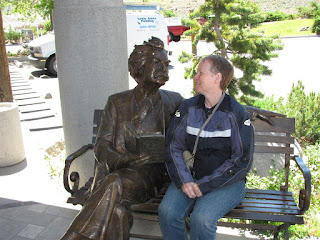 Sandy and an old friend
Next, we crossed straight over US 395 and started back up on a road known as Geiger Grade. It has some interesting curves and views, none of which bothered me in the slightest. Of course, unlike Colorado and Utah, Nevada seems to like guard rails and that makes all the difference. Before long, we arrived in Virginia City and managed to find parking spaces along the street. On the whole run, the first vehicle I caught up with was just as we hit the Virginia City limits. 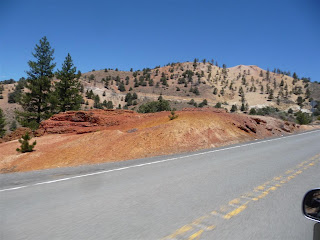 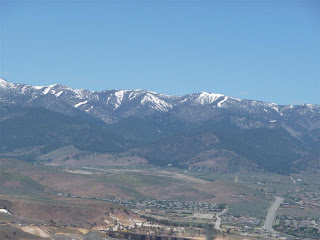 The view from Geiger Grade 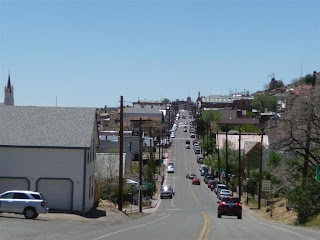 Virginia City Nevada
Walking around Virginia City, we bought Sandy a few shirts and visited a few of the tourist traps. We capped it all off with ice cream from Red's Candy Store. We had posted a meeting time at the bikes of 2:00 PM and everyone made it on time. 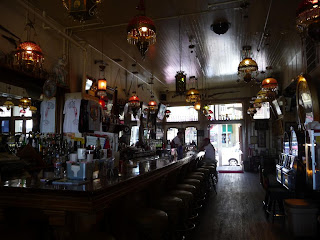 The Bucket of Blood Saloon 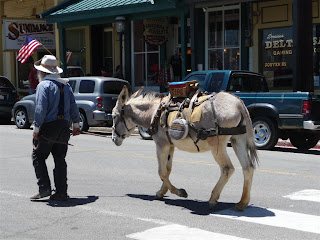 A vision from the past
From Virginia City, we headed south through Gold Hill and Silver City. The curves were marred by yet another flatlander trailing his brakes at half the posted speed limit. Once on US 50, we were approaching Carson City when the GPS sprung a new route on me that by-passed the busy downtown area. We came out further south and followed US 395 until we exited on Jack's Valley Road. This took us right to Genoa, the oldest community in Nevada. Our traditional stop here is, not coincidently, the oldest bar in Nevada, also known as the Genoa. 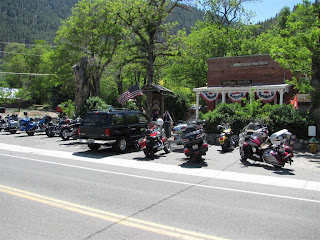 VROC at the Genoa 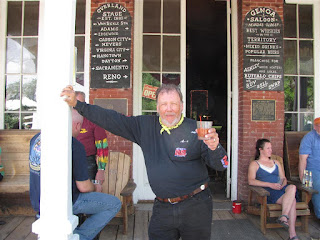 Sixpack and the pause that refreshes
From Genoa, we followed Foothills Road and then retraced our steps back to Topaz Lake where we found Robert and Dorian, Carson City folk, had hot dogs grilled for our dining pleasure. We also met Bill and Susan, Vulcan riders from Maple Ridge BC.  Everyone gathered around RV site 5 where they were set up and socialized until it was time for the raffle. Nitelite and Linda, assisted by KrazBarb, gave away a raft of goodies. The proceeds of the raffle will support the fight against breast cancer. Jamey T won the 50/50 draw and donated his winnings to the cause as well. 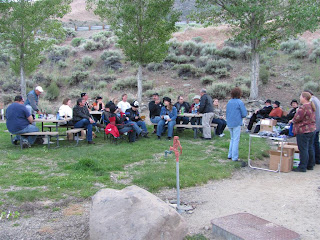 The raffle
Nitelite also presented a plaque to VSP recognizing his nine years of organizing HSVROC. This was hiss final year and it is likely new organizers will move the event to another location. Thank you, Don, for many miles of smiles out here in the High Sierras. 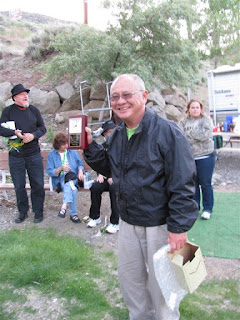 VSP's plaque of appreciation
After the raffle, we wandered over to the casino bar to redeem our free drink coupons. We ended up with quite a few tables linked together and the band, Radio Rage out of Los Angeles, took notice of our rowdy presence. They later said they enjoyed having us there, although the servers stopped giving us coasters after Sandy hit two strangers while trying the Ninja shuriken trick. Paper airplanes were also seen flying back and forth on more than a few occasions. When the coupons ran out, Slots ordered some rounds and everyone got feeling pretty good. Rubbergator even was persuaded to dance by Trouble. 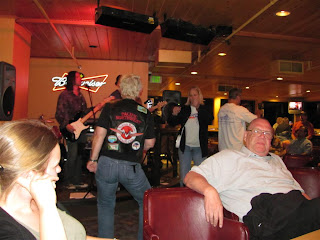 Rubbergator and Trouble dancing
About midnight, the last of us excepting Cat and Jimmy packed up and headed off to bed.