I was still feeling under the weather this morning, but we weren't able to cancel the Priceline reserved room at the Thunderbird Motel in Elko and VSP was meeting some people at the Star Hotel for a Basque supper, so we decided to forge on. Sherm offered to ride the Wing and let me travel in the truck, but I decided to try riding. 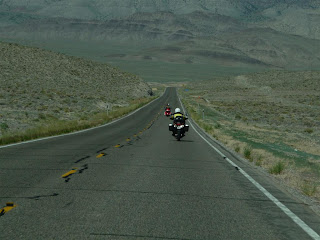 Jamey T. and VSP riding the loneliest road
We headed west on US 50 with Jamey T leading, then VSP followed by Sherm. I brought up the rear. Fifty was pretty lonely until we came to a flagman out in the middle of nowhere who held us up until a pilot car came by. They were tarring and chip sealing the road. Once we got past the construction, we continued on fresh chips all the way to the Nevada border. 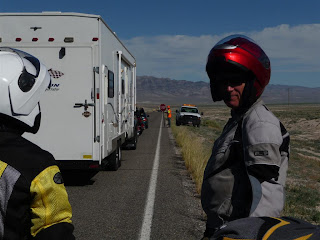 VSP and Jamey waiting for the pilot car
At the state line, there was a small casino/gas station. We made a pit stop and then VSP, Jamey & Trouble left us to go look at the great basin. We continued on to Ely where we stopped briefly at the Hotel Nevada. On the way into town, I was almost taken out by a young lady in a white pickup truck who pulled out of a car wash directly behind Sherm. I guess she didn't know I was already occupying that spot. I swerved out of her way and made a few instructional hand gestures. At the hotel, we skipped eating (I sure didn't want to look at any food) and soon started north towards Wells. 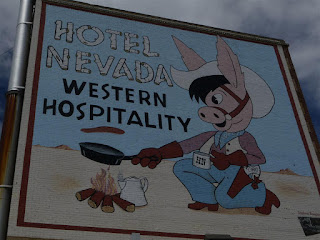 A Hotel Nevada sign
On the north side of Ely is the little burg of McGill. I'm not sure what the point of the 25 MPH zone through this long, skinny hamlet was all about, but it was unpleasant as the ambient temperature was starting to rise. If US 50 is the loneliest road, US 93 has to be in the running for the most boring. It's like 50 but without the periodic twisting climbs as you pass over the various ranges. Going north, it's one dry valley all the way. Further up, the scenery improved as the Ruby Range came into view. We reached Wells at the 93/I-80 intersection with little difficulty despite some verga and rain off in the distance. 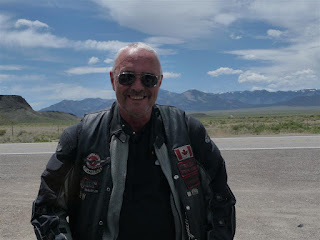 Me putting on a brave face in Wells
From Wells, we rode 50 miles to Elko directly into a strong headwind. Arriving at the Thunderbird about 2:00 Pacific Time, I laid down while Sandy and Sherm went out and found me some Melba toast and ginger ale.

VSP, Jamey and Trouble rolled in a little less than two hours after we did, but they had a different tale. Coming up through the valley, they caught the edge of the rain and actually had simultaneous rain with a small dust storm near Wells. Then they rode sustained 40 MPH crosswinds to Elko. 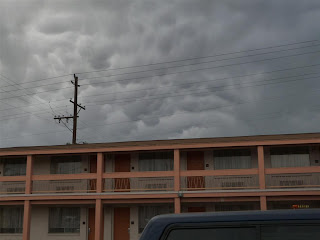 Mammatus clouds over the Thunderbird Motel in Elko, Nevada
I wasn't up to supper but the Melba toast and ginger ale were making me feel better. More important, they were staying down. The rest of the gang walked a couple of blocks to the Star Hotel, met VSP's friends, and had a Basque family style supper. The gentleman they met rode in on a Harley Deuce like Sherm's except that it was a different colour. This is quite the coincidence because there weren't that many of them made. Sherm liked the sound of his pipes but not the look.

We had gotten word from Tony D that there were no Garmin Zumo 550 GPS's in Reno so, while the crew was out, I ordered a new unit from GPS City in Las Vegas to be shipped the next day Fedex overnight to the Super 8 at Topaz Lodge.  I called the hotel to alert them that a package would be arriving.

After supper, i went to sleep quite early hoping tomorrow would find me feeling better. 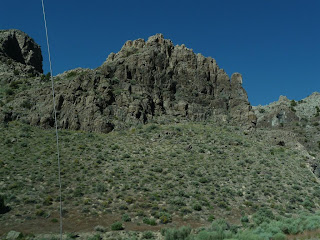 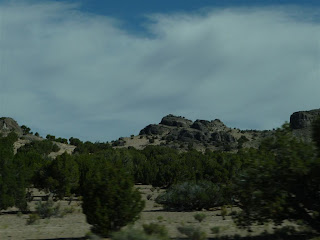 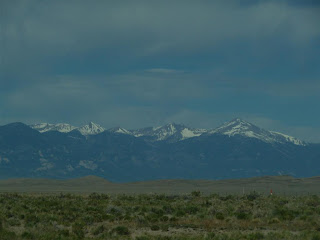 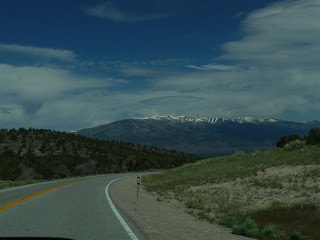 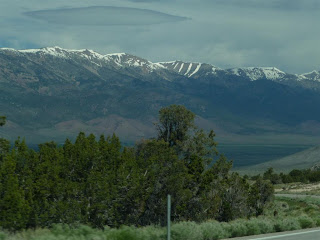 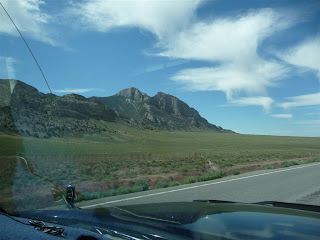 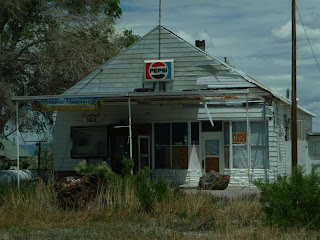 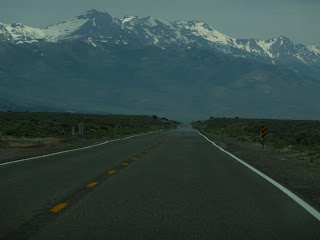