Last night at 10:00 PM, after I posted the blog for the day, what sounded like a tornado siren let out on short wail. I went up to the desk to ask about it and the lady told me it was a curfew notice. It lets all the young people under 16 know that they must be off the streets. It doesn't sound like a bad plan to me. She said if it were a tornado warning, it would blow nonstop and if there were a fire, it would sound a fluctuating tone.

We watched some Golden Girls on TV last night. I felt a little bad because, the day after I mentioned GG in my blog from St. Cloud, Rue McClanahan passed away. It made me think of the day Sherm and I were talking about all things Carlin on the way to Elko, Nevada and then found out George Carlin had died that day.

We were up at 6:00 AM this morning. The weather radar showed our incredible run of good luck (knock wood again) was continuing because the last of several thunder storms was just ready to pass through. In fact, when it was about to reach Pierre, it split and went around both sides of town. I don't know how long this will last but it sure has been nice so far.

We were loaded and running west on US 14 at 7:45. There were dark clouds again and a light spit of rain, but faith in the radar was reinforced when it didn't last. 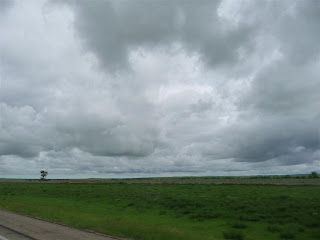 Dark clouds on US 14 west of Pierre
U 14 went west a ways and then turned south. It was pretty much straight until Midland, a small collection of buildings that was about the only sign of habitation we had encountered so far. We stopped at Midland Food & Fuel for a pit stop and coffee. The lady there confirmed that the small group of elk we saw coming into town was owned by a ranch. 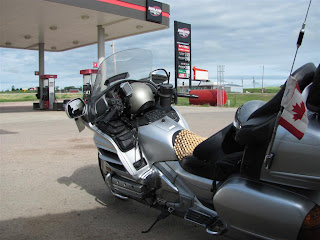 Midland Food & Fuel, Midland, South Dakota
We arrived in the town of Wall after passing countless Wall Drug signs. The drug store, opened in 1931, became famous for free ice water and still only charges a nickel for coffee but it has pretty well taken over the whole town. We hadn't stopped at Wall Drug since 1978 even though we have passed it more than a few times. Before going downtown, we stopped for gas and this is where the disaster occurred.

Sandy got this sheep skin pad the shape of the Wing's back seat at Americade a few years ago. I had one too but switched to a beaded seat cover a while back and gave my sheep to Heather. Anyway, Sandy valued this sheepskin very highly. We stopped at the fuel pump and she went inside to the restroom while I filled up. Then I moved the bike around to a parking space in front of the building. When she came back out, I was talking to some riders from Omaha. Then, as we got ready to leave, she saw the sheepskin was gone. This happened once before when I moved the bike and it blew off but we found it in the lot. This time, we scoured the lot but it was nowhere to be seen. Either someone saw it on the ground and scooped it up or someone stole it right off the bike while we were over talking. In any case, it was decided after much discussion that it was my fault that the hide was gone.

We went downtown and walked through the drug store, a huge collection of chambers with all manner of gifts, souvenirs and doodads. One special feature are stuffed jackalopes. Unfortunately, we were not in much of a mood for shopping. On the way out, I talked to a man with a '98 Moto Guzzi on his way to the Guzzi national gathering in John Day, Oregon. Strangely enough, we have  actually been through John Day. 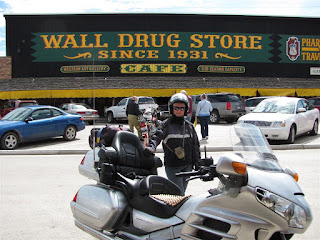 Sandy, contemplating the sheepskin, putting on a brave face in Wall
We put off our ride into the Black Hills to go looking for a sheepskin in Rapid City. The Harley dealer didn't have one in stock, but Sturgis HD had one that fit an UltraGlide. It was priced at $160. Ouch. The Yamaha/Kaw dealer had gel pads but nothing else. The Honda/Suzuki dealer had nothing but the young parts guy suggested a leather place in Deadwood. The older parts guy said the proprietor had passed away two months ago. Finally, we went to Plan B and bought a black toilet seat cover (perfect fit but not padded as well) at WalMart. Two hours behind schedule, we headed for the Black Hills after having seen way more of Rapid City than I ever wanted to.

We hauled out of Rapid on US 16, the road to Mount Rushmore. Before we got to the monument, we turned left on 16A. This is known as the Iron Mountain Road, a scenic byway that really winds its way through the unique landscape. It is know for the Pigtail Bridges, where you corkscrew around over or under where you just were, and the tunnels that frame Mount Rushmore. On the way up to the high point, two vehicles pulled over to let me go by. This was good because the temperature gauge (remember my talk about Honda and the silly backwards rad fans) was climbing because of the slow pace. I stopped at the parking lot at the summit to let it cool down. Unfortunately, on the way down, the slugs (four wheeled flatlanders) hogged the road, moving at 20 MPH riding the brakes all the way down. 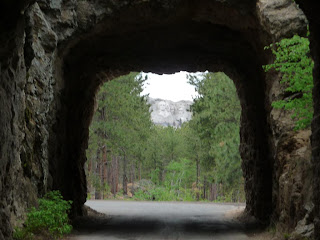 Mount Rushmore through a tunnel on the Iron Mountain Road
Normally, one follows 16A around until it meets ND 87, also known as the famous Needles Highway, and takes this way back. Both the GPS and Google Maps, because of the Via points I chose, short circuited this and had me go from 16A to 87 via County Road 753 (aka South Playhouse Road). There was no one, not one single vehicle, on this stretch. The surface was passable and we made it to the Needles Highway in no time. This cutoff was good because we got the best parts of both roads while saving time because we were behind schedule.

Once on 87, we wound our way towards The Needles. These are rock spires that stand tall above the landscape. Once again, slow traffic and the climb started the bike heating up. I pulled out at an overlook just before we got to the top to let it cool again. There, we met a grizzled rider from Oklahoma City on an '08 Wing that he had just picked up new (ABS and all) for $20K. He had no chrome either and his rims looked almost as rugged as mine. A kindred spirit.  He had been out a month and the last two days were the only ones where he hadn't been hit with rain. Funny thing, he has a 2000 Vulcan at home. I gave him the VROC URL, wished him well and we went on our way.

Just before the top, we met a dozen Corvettes heading downgrade. Then we had to stop and let traffic go because threading the Eye of the Needle is a unidirectional thing. 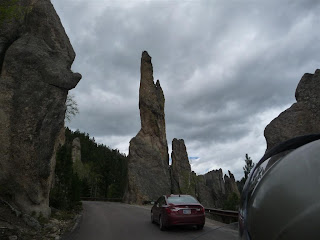 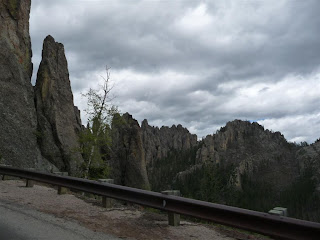 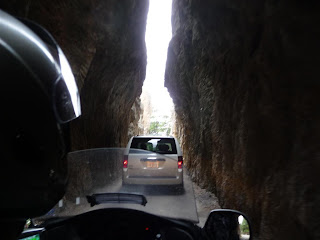 Threading the Eye of the Needle 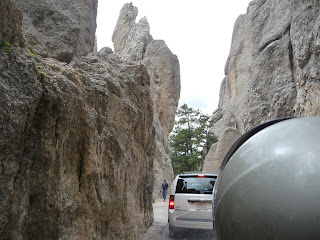 Coming out the other side 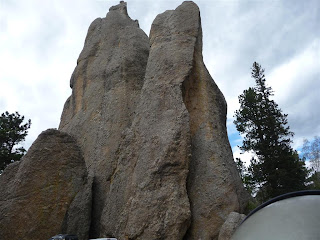 Yet another needle
Coming down the other side, we found one other benefit to my shortcut. It seems we missed the gate for Custer State Park and were able to exit without paying a fee. I felt bad, but what can you do? We got back on US 16 and ran down through Hill City. On the other side, we stopped at a Tourist Information place that was closed. It had been open but their idea of Saturday hours was from 8:00 AM until noon. Wow. Sandy had cookies and I had Slim Jims because it seems that, in all the rush of looking for sheepskins, we forgot to eat lunch. 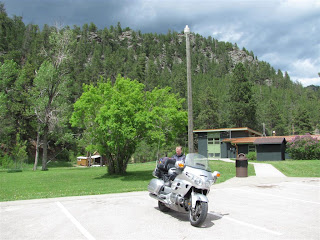 The closed Tourist Information building near Hill City, South Dakota
From there, we caught US 385 towards Lead. This is another great road with grades and sweeping curves. I was much happier when I passed the guy in the black Escalade with the Harley decal in the back window who was traveling 5 MP under the posted limit. I was very ticked off, though, because my microphone cord was severely intermittent. About six miles from Deadwood, I was trying to get by a car to ride the last curves into town unhindered when Sandy said something that sounded like "sheepskin". It seems she had seen Trevino's Leathers, which had hides hanging on the porch.

I turned around and we went back. This was the place the Honda guy had mentioned and yes, the owner had died but someone else was still running it. They had one black short wool skin that fit the Wing seat with only a little overhang on the front. $45.00. Done. take that, Harley Davidson, with your $160 seat cover.

I stopped across the road for gas and found 89 Octane with 10% Ethanol was $0.10/gallon CHEAPER than 87 Octane without Ethanol. Makes me wonder all over again about that new Ethanol plant we saw in Minnesota.

In Lead, we reported to Lynn's Dakota Mart adjacent to the town's only traffic light. From there, I called Jamey T. Then I called him again because the Zumo was still Bluetoothed to the phone the first time and, without my headset on, I couldn't hear anything. Melanie (Trouble) drove over and escorted us the convoluted way to the house.

Jamey and Melanie will be leaving Tuesday for Cortez. They are great folks and it was kind of them to invite us to stay. Jamie had been mowing his yard. I looked at the slope and decided I wouldn't try it without a life line. We met Jasmine, their 11 year old Labrador who is very fit for her age and one of the calmest canines I have ever met. 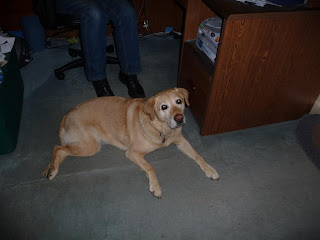 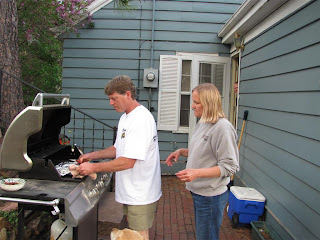 It looks like Jamey is cooking, but don't be fooled
We sat around after supper telling tales and talking plans. It looks like the Wolfman's Wandering Rally (the very event we are heading for in Cortez this year) will be coming back to the Black Hills next year and we are really looking forward to it. During the conversation, Jamey noticed we were still working on Central Time. It seems that we have actually been on Mountain Time since we left Pierre. With this piece of very useful information in hand, we turned in early. The blog and bills would have to wait until tomorrow.

Closeup of the really good part: