There was a beautiful blue sky this morning. We weren't in a rush and hit the road at 8:10, dressed in sweaters and electric Gerbing gear because, although it was warming here, we were heading up. West of town on US 34, we stopped at the East Gate of Rocky Mountain National Park and paid $20 for the privilege of riding Trail Ridge Road, the highest continuous highway in the United States.

The start of the climb was nothing spectacular. The road wound back and forth as it climbed and we had several slow moving vehicles pull over and wave us past. Initially, the scenery was typical western mountains, pine trees, rocks and meadows. Soon, however, we started to see snow along the road. Then the trees thinned out and the snowbanks got higher. Then the trees disappeared as we got above the tree line and, on the ridge, the spectacular vistas opened up. In some of the photos where you can see the edge of the road, there is nothing down there but air for a long way. We encountered road work with a single lane where we followed a pilot car on our way to the summit. A cold wind was blasting us and, at one point, both sides of the road dropped away, indicating we really were on the Divide.

Over the summit at 12,183 feet, we descended to Milner Pass at a mere 10,759 and stopped for pictures. Starting on down from there, I thought we were home free until we started to encounter gravel, water and mud along with waffle pavement where they had scarified it. Then we had to stop for another flagman and wait for another pilot car. Luckily, we got there near the end of the cycle and only waited ten minutes or so. I'm not sure how far we followed the pilot vehicle, but it was all the way through the switchbacks. Nothing really difficult, except for two wet muddy spots, but annoying. Finally, as the road leveled out, we were set free. Everthing was fine the rest of the way except for gravel where they were building a new west gate.

This is a spectacular road but I wouldn't recommend it until they get the work finished. I was pleased that, even with the sheer drops, I didn't feel a single twinge. It seems my fear of heights is getting more manageable. Not quite so good for Sandy, who took many of the photos with her eyes closed and told me several times that she felt like throwing up.

Here are some pictures. The rest of the day continues below. 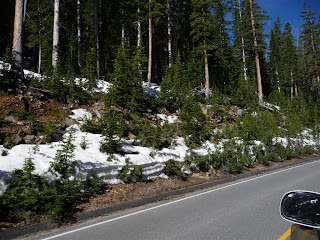 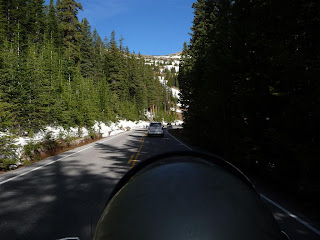 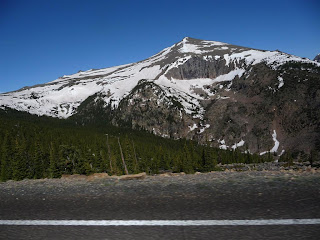 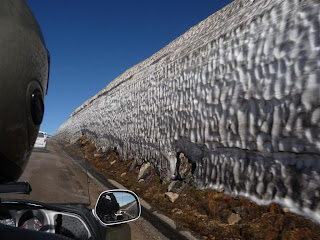 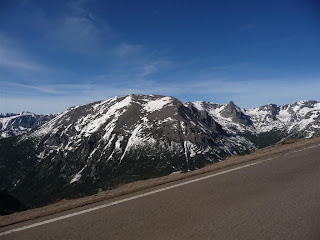 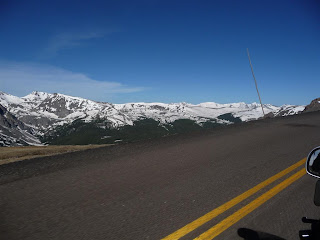 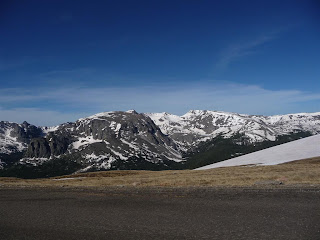 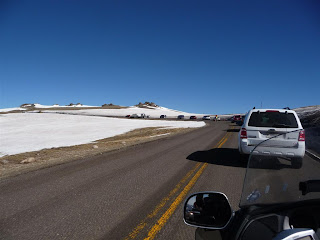 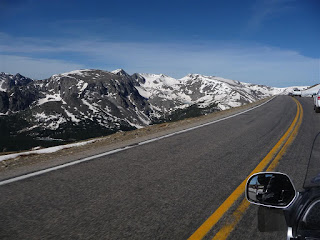 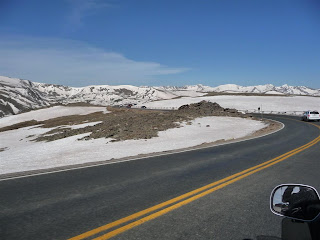 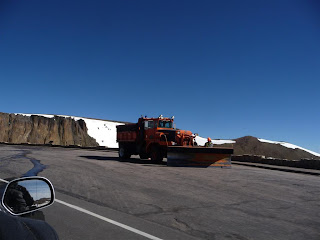 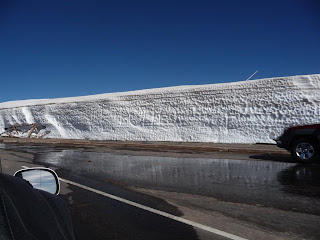 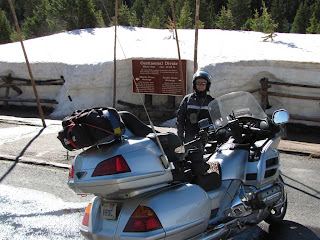 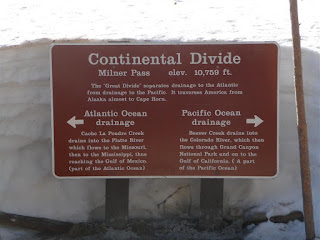 Leaving the park, we arrived in Grand Lake anticipating a great breakfast at the Fat Cat Cafe, the place we found in 2007 at the Wandering Rally here. The place is billed as the best breakfast in Grand Lake and we won't disagree. Unfortunately, the same as when we stopped here in 2008, Sally was closed for the day. Tomorrow, too. Damn. And the coffee place we also used to frequent was out of business. We settled for an acceptable breakfast at the Sagebrush Bar and Grill, the only restaurant we found open. It seems Grand Lake pretty well closes down on Mondays. 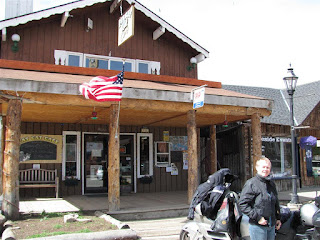 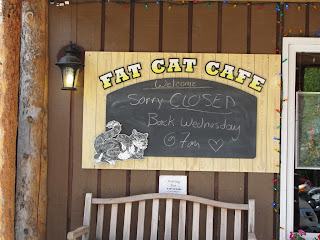 The bad news
We did notice that the pine bark beetle damage here is even worse now than it was a couple of years ago. From Grand Lake, we continued south to Granby and turned west on US 40, riding through the scenic Byers Canyon. This small but twisty canyon was carved by the Colorado River, which is still pretty small up here. For once, there were no vehicles ahead of us and I could run whatever pace I chose. I chose reasonable. We stopped in Kremmling for fuel and called ahead to let Malachi (our host for tonight) know where we were. 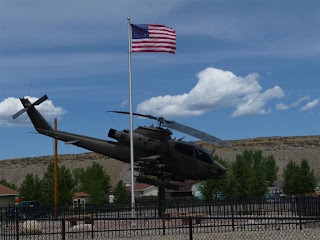 War Memorial in Kremmling
From Kremmling, we took Co 134 over Gore Pass in the Routt National Forest to Toponas and then Co 131 south through McCoy and Bond. There are no bad roads in this area and the scenery is great. At State Bridge, we saw a Harley and trailer pulled over so we stopped to see if they were OK. That's how we met Mike and Judy of Florida, out on vacation. They offered us Coke Zero and water from their cooler and we talked about traveling. Then, with CB's on, we rode and talked our way to I-70 and west to Glenwood Canyon. We stopped at the rest area where they put the rafts in the (again) Colorado River. I've been through Glenwood a few times and never ceause to be amazed by its awesome beauty. 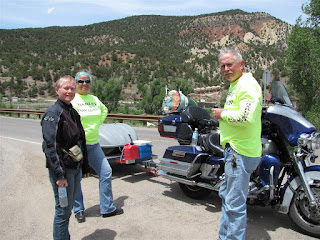 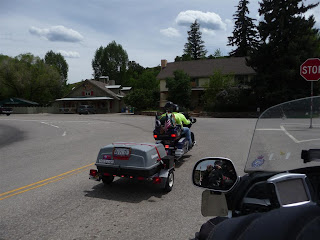 Mike & Judy on the road 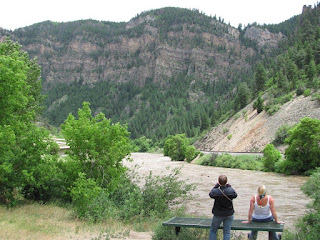 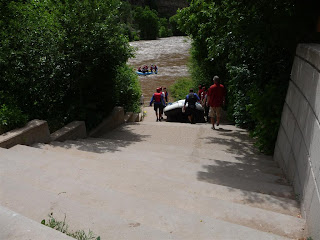 Rafters off on an adventure
We left M & J at the rest area and highballed the rest of the way to Mal and Corvette's place in Silt, about 30 miles west. Arriving there, we found that Cheap B and his granddaughter Elyse had already arrived from Alabama. Mal's son Vinnie and his girlfriend Sami were also there and would be traveling with us tomorrow towing bikes behind a jeep.

Corvette's mom and dad, Macha and Dennis, came over and Mal did burgers and dogs on the grill. Corvette's chicken enchilada casserole and Dennis' salsa rounded out a great meal. Then we sat outside and watched a lightning show. Sometimes Mother Nature provides the best entertainment.

From Glenwood, the cruise control refused to work. Mal had a spray version of Deoxit contact cleaner, the same stuff I have in a bottle. The spray is good for getting inside the handlebar switches and I gave it a good dose. We'll see how that workes tomorrow. Also, starting tomorrow, we won't be traveling alone any more.