Today was the first day of summer. Weather.com told me that the forecast thunderstorms for the Cheyenne area had been cancelled and a big storm was just leaving central Nebraska heading east. We were packed and loaded before the continental breakfast started at 6:00 AM. After a quick bowl of raisin bran and half a banana, we were rolling by 6:15 in the still 6C Wyoming air.

The first 28 miles were under construction. In this area, they use very fine rain grooves to promote wet weather traction, which can have an unsettling feel to ride on. As we are seeing more and more, the once empty horizon was dotted with yet one more wind farm. 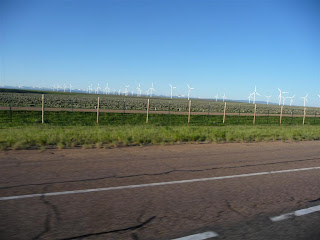 Wind farm near Evanston Wyoming
Green River, Wyoming is a very pretty place. It sits in a valley surrounded by all kinds of interesting rock formations. 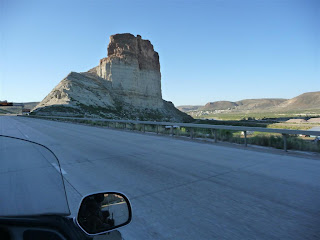 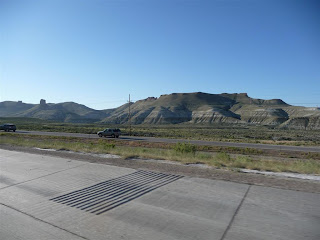 Green River formations
About 8:45, I was starting to feel the round of daily fatigue way too early. I think the mind numbing 80 MPH haul across I-80, certainly not the most interesting of highways, is a major factor. Up here in the Wyoming high country, there is very little to break the monotony as mile after mile drone by under your tires. In any case, the trusty 5 Hour Energy bottle got me back on track for the time being. 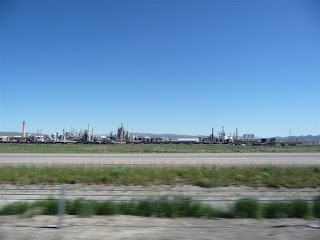 Sinclair Refinery - Rawlins Wyoming
From Rawlins to Laramie, the signs kept warning that high winds were possible. We know this to be true because we got beaten up pretty badly out here on the last trip across 80. Today, however, they were relatively benign. There was snow not far from the road as we rolled along at nearly 8,000 feet. We stopped at the Elk Mountain Conoco for gas. The GPS shows Elk Mountain as a location but, in reality, it is just a Conoco station. 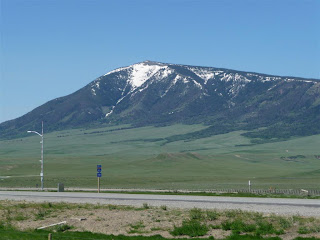 Elk Mountain
We had an early lunch at a Laramie McDonalds. I phoned RL in Verner and added a new headset for Sandy to the list of things I'll pick up when I get back. Then we continued east, crossing the highest point on I-80 at the Lincoln rest area. It is hard to believe you are 8,688 feet up when everything around you is flat. After the summit, it was confusing because the angle of the land made me believe I was still climbing but the GPS and bike overruled my confused senses and confirmed we were descending. 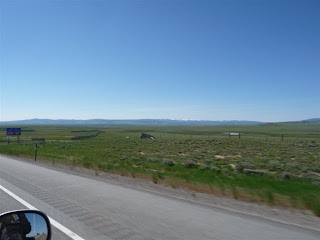 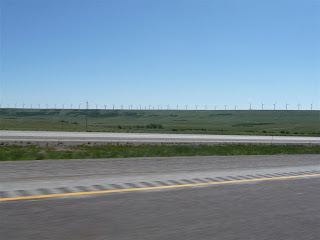 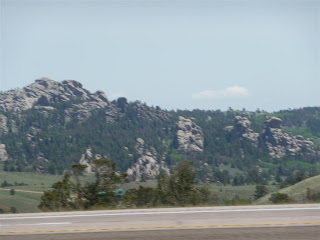 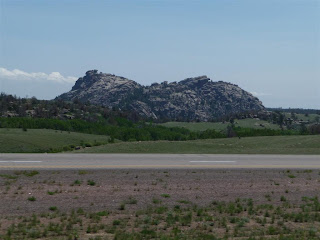 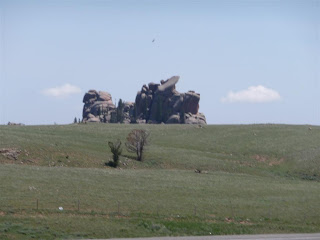 Interesting rocks up here (2 photos)
We continued through Cheyenne to Pine Bluff where we took on more fuel. We talked with two local riders, Eric and Marty. Marty has an '04 red/black Vulcan Classic and I steered him towards VROC for advice on how to modify his ride. Sandy put water from my mug in hers, a big mistake because I often have coffee in mine and it imparts a distinct taste to the H2O. I don't mind it but we needed to buy some more water to fix hers.

We left Pine Bluffs and rode for over 100 miles wondering when we were going to reach Nebraska. We actually did immediately after leaving Pine Bluffs and we'd been in the Nebraska panhandle all along. The Cabelas world headquarters with its awesome fighting elk bronze out front is in Sidney Nebrasaka, not Sidney Wyoming.

Not far from the I-76 junction, we stopped at a scenic lookout. It was getting progressively warmer and mesh jackets were called for. Continuing east, we amused ourselves by trying to photograph our reflection in passing tankers. Nebraska also refreshed our memories on the smell of an upwind feed lot on a hot day. 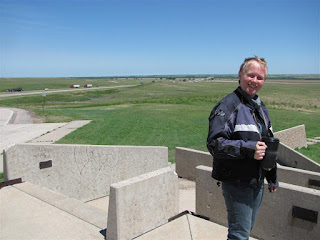 Looking out on eastbound I-80 near Big Springs Nebraska 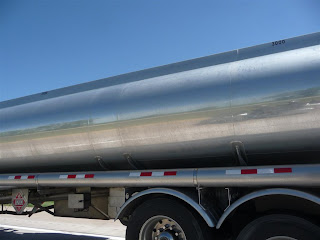 Attempted self portrait
I picked Kearney as the target for the day. As we got close, we could see the river south of the highway had overflowed its banks. The storm on the radar this morning had looked severe and here was the evidence. In Kearney, we checked into the Super 8. This chain comes in all shapes and sizes and this one was at the lower end of the scale. After we ate at the nearby Perkins, we returned to find the bike sidestand had sunk into the asphalt parking lot. I can't understand a hotel having a residential grade paving job where the summer temperatures often break 100 degrees. On the plus side, the tornado procedures were prominently posted at the front desk.

I worked on some blog/bill stuff and then went outside for a few moments. At 10:10, lightning was visible off to the west. By 11:00, a severe storm passed just south of us with Kearney only getting light rainfall. Right after that, I went to bed.

Very nice blog! The hoodoos (or Vedauwoo or whatever near Cheyenne) are pretty cool. I'll have to check and see if you've done many Montana journeys, since I'm largely from the Paradise/Plains Montana area, but have lived in NC, GA, AZ, UT, and WY.

I have a bad habit of stopping and exploring anything of interest, so I couldn't put on as many miles as y'all.

Great pics! Your GPS is right, Elk Mountain is actually a town, you just can't see it from Conoco or the Mountain due to the trees. Glad to see you were able to pass through during the warmer months :)