These short days, 400 miles or less, allow us a bit more leisure in the mornings.  We didn't hit the road until 7:50, dressed warmly against a brisk 8C temperature and partly cloudy skies.  The beaded seat is nice for circulating air under one's butt on a warm day, but on a morning like this it can be a a tad uncomfortable.

I almost had a disaster first thing this morning when I moved the bike to a level parking space so I could get it on the centre stand and check the tires.  When I got down to check the front rubber, I had stopped about six inches from an long and very sharp nail.  I threw it in the trash while heaving a sigh of relief that I didn't have to try out my tire plugging kit.

Since I didn't fuel up last night, we had to hit a gas station on the way out of town.  (Note to self, start taking the time to fuel up at night.)  I encountered something that I don't like, a large Citgo station with no pay at the pump.  This is fairly common and I now avoid Citgo's like the plague.  The fact that they distribute Venezuelan gas is another reason to shop elsewhere.  I also had to get my mind around the BP situation.  I like BP but, with the Gulf oil blowout and all, I wasn't sure whether I should support them either.  But they will need the money for the cleanup so BP will remain on my vendor list.  For now.

Our first stop was in the middle of nowhere, the North 141 Travel Plaza.  This Marathon station sits at the intersection of Highways 28 and 141.  The nice lady at the counter told us she and her husband had moved here from Chicago about five years ago when they found life in the city was making them angry.  She was kind enough to let me pay for coffee with small change and then bought most of the rest of my coins, which have been a problem for me because I can't convert them at home.  I've been carrying this Baggie of mostly pennies and dimes for quite a while but never found the time to count them out for an actual purchase.  On the way out, we met a couple from northern Wisconsin, he on a VTX and she riding a BRP Spyder.  She really liked the ride.

The next stop was in Bessemer, Michigan, almost on the Wisconsin border.  I looked it up and found the town was named for Henry Bessemer, inventor of the Bessemer process used in smelting.  After years of tracking Bessemer matte at Inco, this made me feel vaguely at home.

My plan was to follow US 2 to Ashland, Wisconsin and then take US 63 south.  The GPS thought it would be amusing to take some roads less traveled and suggested an alternate route.  Since I have been through Ashland many times, I went for it.  We turned off US 2 onto Wisconsin County Road B and then south in Wi 122.  This would have been a great road with  its tight curves except for frost damage and more gravel in the corners than West Virginia.  We also got buzzed by some kind of heron-like bird, although my first thought was "Pterodactyl!!!!"

From Wisconsin 122, we turned onto Wi 77, a much better road.  It was wide and well surfaced.  This took us to Mellon where we followed the GPS instructions onto County Gg.  This road was a joy to ride and I would recommend it to anyone.  After many miles of fun, it ended and we turned right on County M.  This was also nice except for the 100 yards of deep, loose pea gravel at the start.  Another bonus was that we only saw six cars in over 30 miles.  Zoom in on the map below and check out the detailed route.

Somewhere along this route, my Garmin Zumo 550 GPS, which has been having some difficulties with the touch screen, decided to lose a button.  One minute it was there and the next, it was gone.  It was the only button I regularly use, the 3rd one down that changes between screens.  Luckily, I can get to all but one of the screens with the touch screen features.  I now have come to the point where I will have to take some action.  In the meantime, I will tape over the hole to keep any rain out. 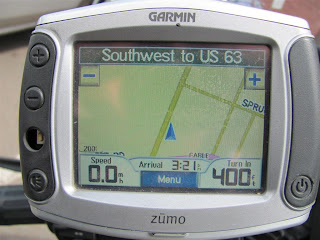 Garmin Zumo 550 GPS with 3rd button down on the left missing
County M ended at US 63 at the tiny town of Cable.  Remember US 63, the road I was originally looking for?  There was a Subway restaurant in Cable so Sandy and I split a meal deal.  Then we headed south on 63 while having a discussion about how long we would keep long hauling this intensely.  A close friend with twice as many miles as I have under his belt has just made the decision to cut back and I need to kick some thoughts around with him over the next week.

The cruise control, supposedly fixed last week, was being a problem again this morning.  It was hard to set and sometimes kicked off.  As the day wore on, however, it started to operate flawlessly.  So did our headset cords, which were behaving like they had broken microphone wires early on and then just started working fine.  Must be some kind of Karma thing because of the GPS self destruction.

In Hayward, Wisconsin you go from remote Wisconsin north woods to civilization in the blink of an eye.  Continuing on, I started to get very sleepy.  We stopped for gas in Cumberland with the temperature climbing towards 80F.  I took off my sweater and jacket panels and downed a 5 Hour Energy drink.  Sandy stowed her Gerbing electric jacket liner. 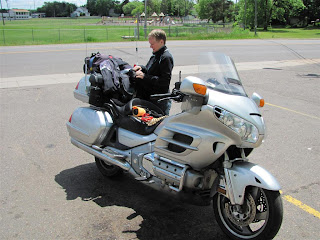 Sandy folding the Gerbing liner
In Spooner, Wisconsin, we saw a motorcycle repair place called The Shop.  This sounded very familiar but maybe, unlike the other, I would be allowed into this place.  And a note to Slammer, we followed a Honda CRV doing more than 55 MPH:-)

Soon after, we turned west on US 8, crossing into Minnesota at Taylors Falls.  From there, we took Mn 95 to Cambridge, where we saw our first Culver's Frozen Yogurt place of the trip and stopped at a Sinclair station.  This is the furthest east I have seen Sinclair.  Then we finished up the run to St. Cloud, filling the gas tank before finding the Super 8 and settling in.  St. Cloud looks like it is booming with many thriving businesses on the main drag.  Unfortunately, what keep going through my head is the voice of Betty White on the Golden Girls saying "One time in St. Olav.......".

One thing I did note today was the almost total absence of helmets on Wisconsin and Minnesota riders.  I support rider's choice, but after a few miles of riding without a bucket, I am not comfortable with my noggin being so exposed.  I have come off a couple of bikes and the fall to the ground head first is much less damaging with something solid between your skull and the pavement.  And so the helmet is my choice.

Gear in the room and bike covered, Sandy and I walked a few blocks to the Applebee's restaurant.  It was 5:30 and we were seated right away.  We both had steak, garlic mashed potatoes and broccoli.  It was a fine supper.  Good timing too, since we found the waiting area backed up with people as we were leaving.  We walked back to the room where she took a shower and watched TV while I worked on bills, blogs and photos.

We covered a leisurely 400 miles today and will do slightly less tomorrow as we aim for Pierre, South Dakota.