Awake at 5:15, I checked the radar and saw a second thunderstorm had just passed over Kearney and was traveling along I-80, standing between us and our destination. On the plus side, it was moving quite fast so maybe we could just hang back a little and stay dry. We lingered over a minimal Super 8 breakfast and got the bike ready. The sidestand foot I put down after the stand sank in the asphalt had also sunk a little way into the pavement. So had the front tire. I've never seen a commercial parking lot this bad. I did add a couple of pounds of air to the tires to make up for our significant decrease in altitude.

We left Kearney at 8:15, sliding under the famous Archway Monument that spans the mid-point of I-80. The late start would be partly offset by not changing time zones today. We could see the storm off ahead of us as we moved along into a strong headwind. Prevailing winds are supposed to be out of the west but I usually don't have the benefit. The excess precipitation had flooded cornfields along the highway, the opposite of the low water levels at home. We stopped in York at McDonalds for breakfast and to use the free WiFi to check the weather. The new NEXRAD capable Garmin Zumo 665 GPS is looking better all the time. 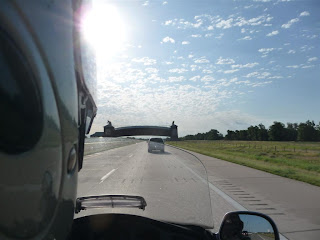 The Archway Monument near Kearney Nebraska 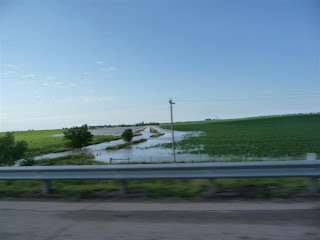 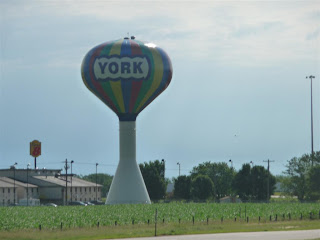 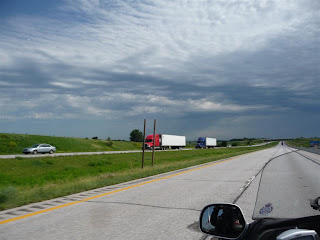 The very thing we are trying to avoid 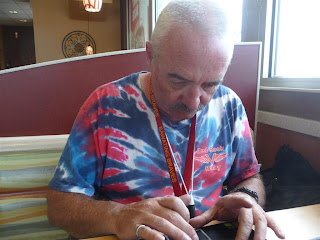 Yours truly checking the NEXRAD at a McDonalds
The storm was reaching Omaha as we left York. Along the way, we could see a new cell spawning north of us and following the original one. We stopped in Gretna Nebraska, a little west of Omaha, to check again. The first cell crossed into Iowa and moved south of I-80, but the second, new one was strengthening as it hit the city. We waited a bit and then moved on, taking I-680 north around the city to avoid both the rain and road construction. By the time we reached Iowa, we were clear of it. In an Iowa parking area (like a rest area but with no services), we met a couple from New Zealand in a rented Class C RV. They were heading east, would fly to Barcelona and back and then return west by a more southerly route. Those Kiwis sure get around. 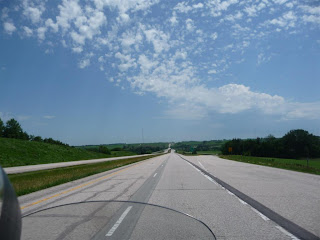 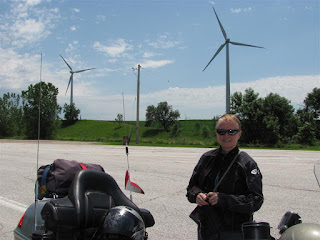 More wind turbines at a rest area in Iowa 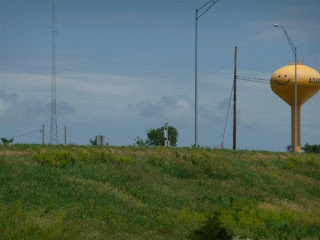 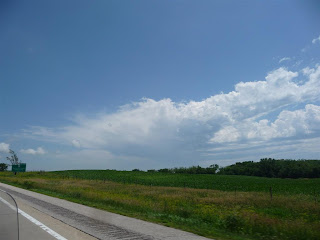 The old storm moving away to the southeast
Iowa slowed us down because the Interstate speed limit was only 70, compared to 75 in the western states. My objective of holding to 5 MPH over the limit cut our speed from 80 to 75. We stopped for gas in Des Moines and were reminded again that "it ain't the heat, it's the humidity". After the dry of the west, having air humid enough to cut with a knife wasn't very comfortable. We rode on and exited towards Cedar Rapids where we caught US 151 northeast. On the way out, I have to marvel at the thought processes of someone who would put a four-way stop at the intersection of two four lane roads. At rush hour, it was a little spot of madness in an otherwise rational day.

It was too late to stop at J&P Cycles in Anamosa. I had hoped we would get a chance to try on Tourmaster Solution riding boots. They are totally waterproof and would eliminate the need for carrying rain totes. In addition to reduced packing space, they would simplify the process of getting suited up in a hurry. I won't buy footgear without trying it on, so I guess we may have to make a trip to Whitehorse in North Conway, New Hampshire for fitting.

At a gas station near Anamosa, I found they were charging $0.30/gallon less for 89 octane 10% ethanol gas than they were for 87 octane pure gasoline. It looks once again like the public isn't very accepting of the poorer performing fuel. I paid more for the regular.

We rode through Dubuque and crossed into Wisconsin at 6:30. It was till 30C but felt cooler because the sun was getting lower in the sky. The sky was clear and I knew how a pitcher must feel with a no-hitter going into the bottom of the 9th inning. Twenty-one days on the road with one to go and still no rain suits. 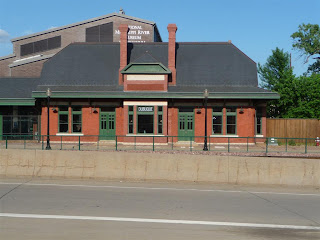 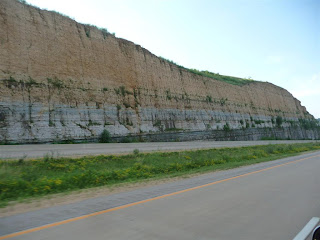 Wisconsin sedimentary rock
We stopped at a BP service station near Belmont and split a Subway meal deal. They had this fountain that let us know that we had to be in Wisconsin. Then we continued on to Madison where I had called earlier to reserve a room at the Days Inn. I called at 3:50 and the young lady had informed me I had until 4:00 to cancel the reservation without charge. We both got a chuckle out of that. 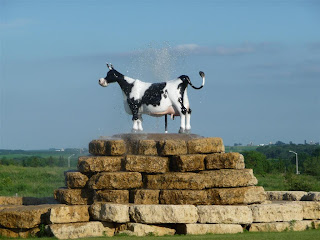 A cow fountain? Yes, it is Wisconsin for sure
We reflected on how this part of Wisconsin is pretty enough to rival central Virginia, which I had always thought belonged on the pastoral scenes one sees on postcards. 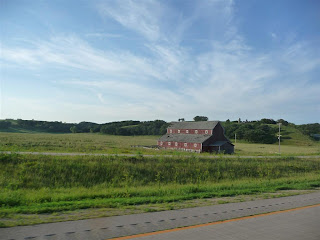 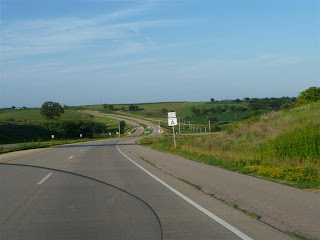 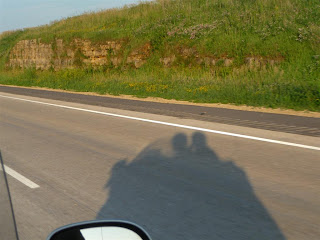 Me and my shadow........
Riding through Madison, the GPS guided us directly to the hotel. When we got there, we found all the entrances to the parking lot were blocked by yellow tape and there were a Sheriff's car and a State Trooper vehicle parked on the grass out front. Somewhat concerned, I called the desk and found the lot was blocked because they would be resurfacing it overnight. The police vehicles were there because they were dropping off a young lady who had a room there. They said we should just park in the back lot. 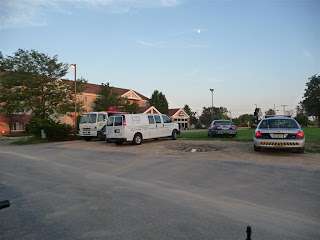 Police at the Days Inn - Madison Wisconsin
This is a very nice Days Inn, one of the best I have seen. We were on the 3rd floor but they had an elevator. They also had an indoor pool and hot tub, but we were too tired to even think about them. The price was competitive as well and they had very fast Internet access. I will put this place on my list of preferred places to stay. The young man on the desk said that the storm they had yesterday had flooded the street out front so it's a good thing we're a day later than the weather.

We turned in fairly early in anticipation of being home tomorrow night.