It was 13C in Escanaba this morning, but clear and sunny. Compared to the Midwest heat, we were willing to accept the cooler air. Ron had to go to Staples for a memory card while Sandy and I made a quick run to WalMart so I could get a new belt and she could pick up a box of individual flavoured coffee creamer that, for some unknown reason, aren't available in Canada.

It was up to 19C by the time we headed out of town on US 2 at 9:00 AM. We cruised along with minimal traffic until we got near Manistique. I had planned to stop at the wayside on the other side of town but saw signs for one hidden in the trees before we got there. We found it to be a great little spot with washroom facilities, picnic tables and a beach. We also talked to a Harley rider and his wife from Luddington who had taken the SS Badger across Lake Michigan and were riding back. 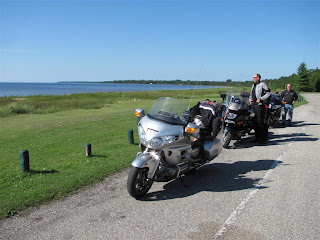 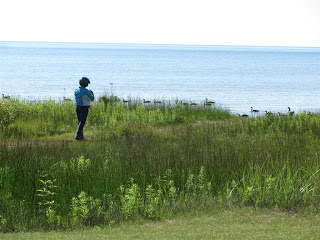 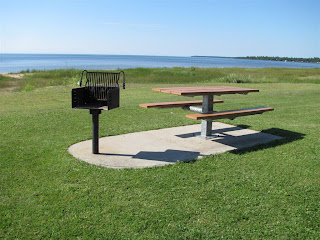 Each picnic table has its own charcoal grill 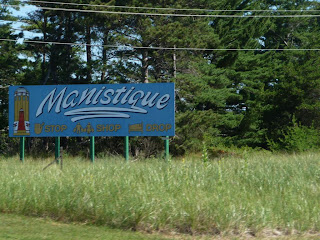 Manistique Michigan - Stop, Shop and Drop
We continued east on Highway 2. Once we got past the Michigan 117 turn that we usually take, we were on road I'm not sure that I have ever traveled before. The opposing traffic picked up, making passing difficult and the beaches looked like places we would like to come back and visit. Near St Ignace, we stopped at the Mystery Spot, something I have seen advertised for years but never stopped for. The tour consisted of the attractive Holly guiding us through the spot where things happen that appear to defy the law of gravity. In actual fact, it is a series of optical illusions similar to the Magnetic Hill where the eyes are misled as to what is level. All the same, Holly was cute and we can now say we've been there along with supposedly millions of others. 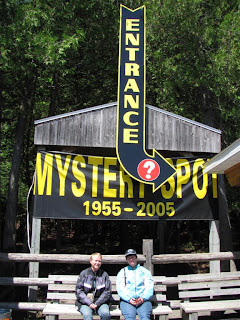 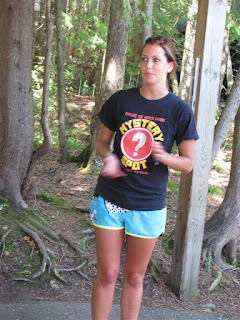 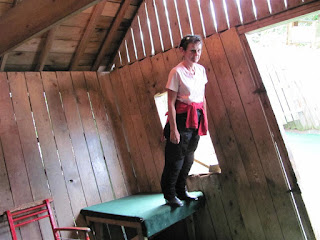 Judy apparently defying gravity
After exploring the wonders of the Mystery Spot, we continued on a short ways to Suzy's Pasties, a place Chunk took us to last August on Interlochen weekend. A pastie is a concoction of meat, potato, rutabaga and onion wrapped in a pastry and baked. They originated in Cornwall, England with the miners who brought them to the Upper Peninsula of Michigan when they emigrated. Sandy and I like them. She had one with turkey while mine was beef. I'm not sure how the rest of the gang appreciated the food but they were polite about it. Ron did finally realize this was a food item and not part of a stripper's wardrobe.

The Wikipedia article mentions that Cornish pasty makers are applying to the EU to have the name "Cornish pasty" protected geographically, that is that only ones made in Cornwall with original recipes and ingredients could carry that name. I wonder what they will try to regulate next? 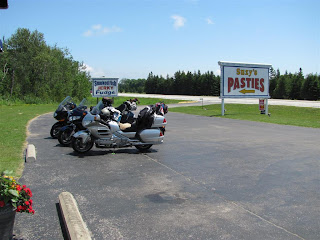 Suzy's Pasties - St Ignace Michigan
For several days while we rode through northern Michigan and Wisconsin, Sandy had reported seeing purple triangular things hanging from trees alongside the road. Finally yesterday, along Michigan 35, I saw some of them too. Ron googled them last night and found they were for Emerald Ash Borers, an invasive species of Asian beetle that appears set to decimate the North American ash tree population. The purple tree hanging devices are sticky traps designed to measure the spread of the destructive insect, which looks like it may be unstoppable. The reason I mention this now is because I was able to get a picture of a trap in a tree next to Suzy's pasties. I guess all the invasive species of animal, insect and plant are just showing us the true nature of globalization. 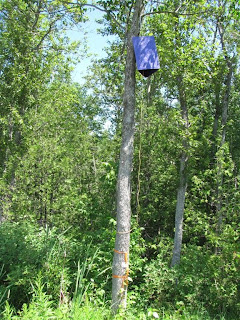 Emerald Ash Borer trap - St Ignace Michigan
From Suzy's, we moved a short way down the road to the Souvenir Barn, where they have a roof walk that provide a view of the Mackinac Bridge (pronounced Mackinaw and known as the Big Mac). Then we fueled up and proceeded to make the five mile crossing, riding part way as usual on the steel grating of the middle lanes. At the toll booth, we encountered a group of bikes from Orangeville, Ontario that included a 1975 Honda CB500T. This was the short-lived successor to the CB450, my second bike. 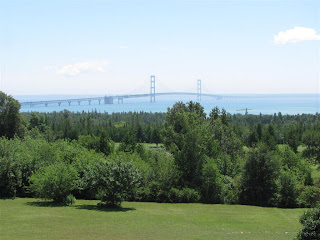 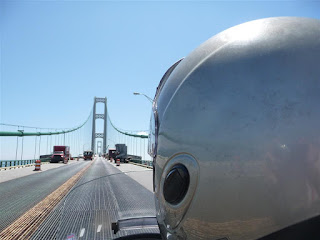 Crossing on the steel grating 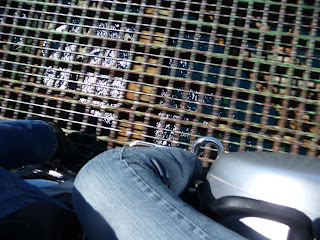 Sandy's leg and the waters below 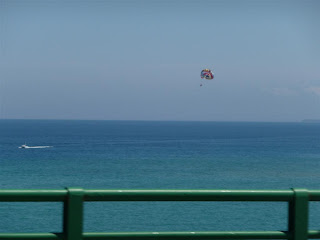 A parasail seen from the bridge
From Mackinaw City, we followed Emmet County 81 towards the Lake Michigan shore. This was my first time on this road and much of it was quite rough. We continued to follow the back roads at the mercy of the GPS until we reached Cross Village, the northern entrance to the Tunnel of Trees. We followed the narrow winding Michigan 119 as it headed south, much of the time covered completely by tree branches. The first vehicle we caught, a white SUV, pulled over and let us by. The second, an Audi, didn't. After he forced an oncoming ambulance to the side of the road and almost wiped out a bicycle as he met an oncoming motorcycle, we decided we didn't want any part of this jerk. He cast a pall on what was otherwise a nice ride. He also couldn't drive very well, speeding up in straights and slowing way down in corners. 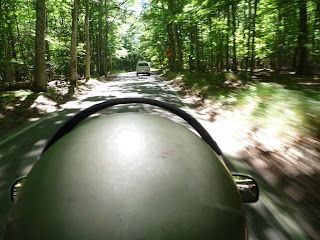 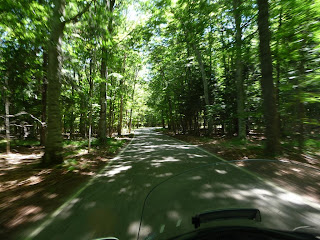 The Tunnel of Trees
At the south end, we stopped at Spring Lake Park and called Tomcat to tell him we were on the outskirts of Petoskey. I had phoned from St Ignace to give him a heads up that we were in the neighborhood. He was home and gave me the address. 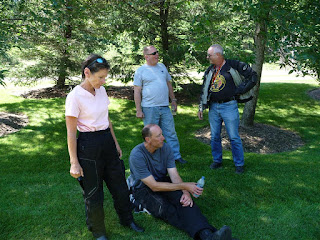 Unwinding from the ride at Spring Lake Park - Petoskey Michigan
Tomcat has a narrow driveway that slopes down to the garage. No problem for a solo bike but a definite challenge to a bike that pulls down there with a Uni-Go trailer. We left the extrication for later and enjoyed an all too brief visit with Tomcat and Mouse, who arrived home shortly after we got there. Ron and Tomcat shared diving experiences and we enjoyed introducing some of our New England VROC friends to some of our Michigan VROC friends. We will be seeing Tomcat and Mouse next month at Interlochen so parting wasn't too sad. I was sorry immediately after we left that neither Sandy nor I had taken any pictures. I need to be more like Sherm and have the camera out at all times.

We got the GoldWing/trailer turned in the driveway and waved goodbye as we headed for Grayling, our stop for the night. I almost hit a cat leaving town on Howard Street as it streaked across the road in front of me. Brake reflexes still work just fine. Then, as we threaded our way along the secondary roads, I rolled into a corner marked 45 MPH at about 65 and felt the bike lurch. My first thought was that we had a rear tire going flat but my trusty passenger let me know that she had fallen asleep and jerked awake.

At 6:45, we arrived at our usual Grayling Days Inn where I had, after our Escanaba experience, made a reservation. The rate here was a very moderate $61. We walked next door to the Canadian Steak and Fish Company where we had supper. Learning from last night, I had soup and a chef salad. Back at the hotel, we turned in early. 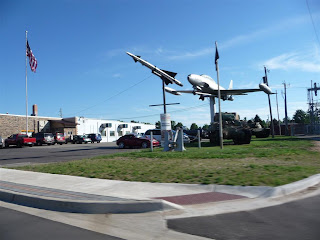 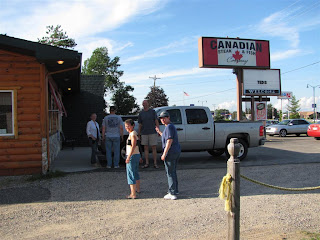