The morning strated out very warm. The King William Inn didn't have breakfast so we walked down to the Family Restaurant to get something to eat. My food was fine but they weren't any better at poaching eggs than they were at making pizza. Back at the motel, I talked to a rider from New Liskeard about the Bikers Reunion held there last weekend. It sounds like it was quite a success again.

We left Huntsville at 9:00 AM via Brunel Road, a new way for me, and connected across through Port Sydney to Highway 141. I really enjoy 141 with its twists and turns on an excellent road surface. If my Frozen North VROC gathering comes off next year, we will be riding this road and other equally nice ones in this area. 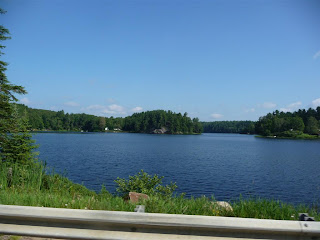 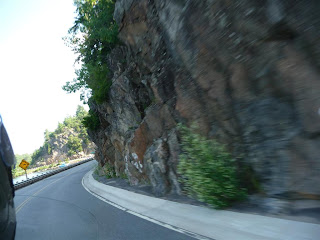 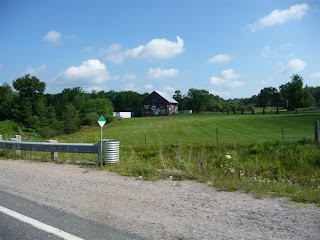 A decorated barn - Rosseau Ontario
As we approached Highways 400/69, we stopped at the new Tim Hortons for gas. I met an EMS guy named Greg Purcell and two of his co-workers who were also bike owners. We talked about bikes in general and the upcoming Parry Sound Sport Bike Rally.

From there, we headed north until we stopped at the chip stand at Pointe Au Baril. Sandy and I really like the chips (French fries for our American readers) here. They are crunchy but not greasy. Then we continued north to the Visitor Centre at the French River, where the first sign in the lot said "Please Brake For Snakes". It is, if you can believe it, a massasauga rattlesnake preserve. We checked out the exhibits in the building and then took a walk on the William E. Small Snowmobile bridge. Bill Small was a driving force in many aspects of sledding in Ontario and still, in his 80's serves as vice-president of a local club. As we were getting ready to leave, I spoke to a couple riding a Harley. It turns out his name was Andre Gour and he grew up on Lasalle Court in the Soo, the street where Mom lived. It seems he knew my brothers and partied with Doug in the old days. I could say that it's a small world but then someone would start singing that awful song...... 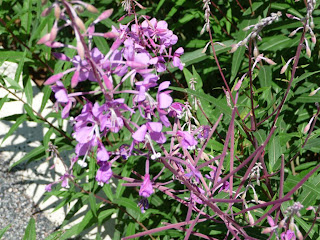 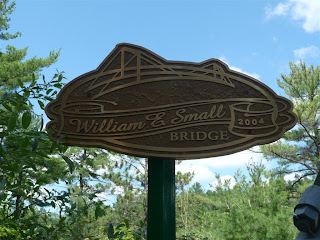 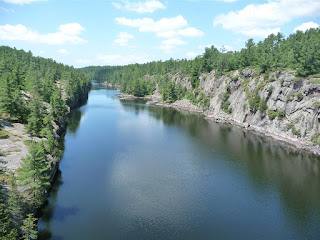 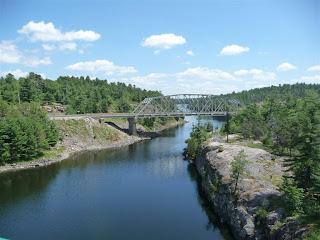 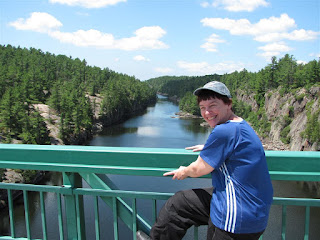 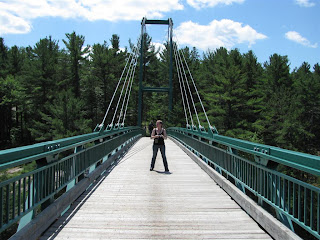 Sandy on the bridge
We got held up in construction at the Killarney turn-off. I'm not sure what that work had to do with the new road, but I wait with bated breath for any new road in the area to open. 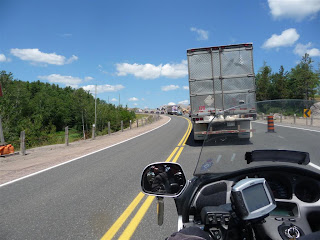 Stopped for construction at the Killarney turn-off
In Sudbury, we parked the bikes and got the gear inside. Then I took the guests on a drive in the van through the Valley (the floor of the asteroid crater) and up to the Big Nickel. Then we returned home in time to pick Sandy up and get us all to Shaughnessy's Restaurant at 6:00 PM to meet Gary, Cheryl and Normie for supper. Don't ask why I don't have any Big Nickel or Shaughnessy's pictures. I should have but didn't think of it. I need lessons from Sherm.

Back at the house, we watched a little TV and Sandy played Jeff Dunham's video of Achmed the Dead Terrorist. Our friends had never heard of him. Then we turned in for the night.