The original plan for today was to ride southwest into Iowa on US 151 to visit the National Motorcycle Museum in Anamosa and check out motorcycle gear at J&P Cycles just up the road. We would then return to Madison for another night in our upgraded king suites. Sandy and I particularly wanted to try on Tourmaster Solution waterproof riding boots, which would allow us to streamline the rain suit bag by getting rid of the rain totes. In addition, zipper/Velcro boots would be easier to put on than our current lace boots.

The whole plan went out the window this morning when we checked the weather radar. There was a large system moving east that was already over Cedar Rapids and had Anamosa directly in its path. Cancelling this excursion meant our riding partners would also miss adding Iowa and Illinois to the lists of states they have ridden in, but the warnings said the storm was severe with possible large, damaging hail. We decided that it would be a good idea to move on to Plan B. Before we did, it would be necessary to figure out what Plan B was. The front was supposed to reach Madison by 6:00 PM but I suspected that, based on the radar, it would be here sooner so we probably shouldn't get out too far.

While the planning was underway, I continued a conversation I had started the evening before with a couple from Mazon, Illinois. Dick and Verla were fun to talk to and we covered a lot of the current political issues. Before we left, they gave me their Email address and said that if we were ever in their area, we had to stop and see them.

The crew decided that Wisconsin Dells was fairly close and northwest, so it would make be a good place to explore for the day. Ron and Brad took the trailers off and chained them to a fence. While we were getting ready, I got a phone call from Sherm. He said Tony D had contacted him because our blog posts were way behind and he was concerned about whether we were OK. I told Sherm that we were having a great time and that I was just too busy to get the posts written.

We finally got underway about 9:15 AM. I planned an indirect route to the Dells using the great Wisconsin county roads. We had to use the Beltline to get clear of the city and then took County K, KP and US 12 to Sauk City. From there, we took County PF all the way to Freedom. This was a great ride with a lot of twisting and winding through the green Wisconsin countryside past picturesque farms. In one valley, there were interesting rocky promontories at the ends of the ridges. We saw an owl taking flight towards us and I was going to stop to help a box turtle off the road but decided not to do it in a blind curve. Traffic was minimal and this stretch was an example of what I consider to be the best kind of riding in America's Dairyland. 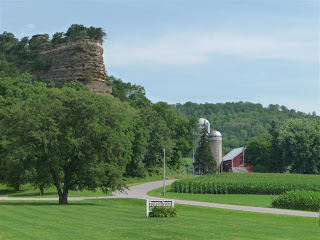 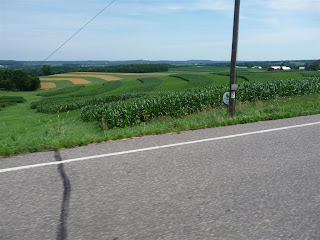 Crop patterns - Wisconsin County Road PF
From Freedom, we took County W to Baraboo, once the headquarters of the Ringling Brothers Circus. We fueled up and headed north on US 12 to the Dells. Little did we know that they had moved the road and no one had told our high tech Garmin devices. Expecting a straight ride in, I missed the ramp onto the new 12 and led the group through five consecutive brand new traffic circles. That was five, one right after the other. Then, since we ended up in a dead end place, we had to ride four of them back before finding a sign for US 12 North and getting back on track. I am not sure what kind of drugs the highway engineer that cooked this up was taking, but it made for a memorable experience. Even the New Englanders, who hail from the home of North American roundabouts, were impressed (if that is the correct word).

After a short jaunt around Delton on I-90/94, we rode into Wisconsin Dells with no idea what we wanted to do. My main experience here was getting escorted out of the Ho-Chunk Casino for forgetting to leave my Buck knife in my saddlebag many years ago. Sandy and I, on the Nomad back in '04, were also snubbed by some GWTA riders in the KOA which has led me to avoid GoldWing organizations. Not too illustrious a history but we were determined to do better. And then we saw the Dells Info Center. 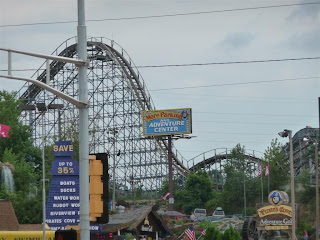 Theme parks and water slides everywhere - what to do? 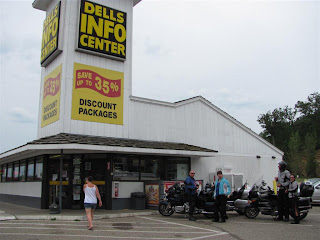 The Info Center - Wisconsin Dells Wisconsin
The gentleman in the info center suggested that if we were looking for the quintessential Dells experience, we should consider the boat cruise of the Upper Dells. The Dells of the Wisconsin River, from the French Dalles or narrows, is a scenic gorge along which the town is situated. It is divided into Upper and Lower Dells by a dam that was built many years ago.

We found the boat tours just over the next bridge and got ourselves parked. After getting tickets (thanks Ron and Laurie for treating us), we walked down the long staircase to where they were holding the tour boat Joliet for us. The upper deck was full so we took seats in the lower section with captain Kayla and guide Claire. These two young ladies are both summer students from the University of Wisconsin.

Once we were aboard, the lines were cast off and we proceeded up river navigating around kayaks, canoes, pontoon boats, personal watercraft and jet tour boats. This is one busy waterway. We immediately started to see the formations of Cambrian or Potsdam sandstone that have made this a popular destination for many decades. 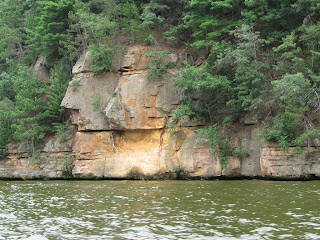 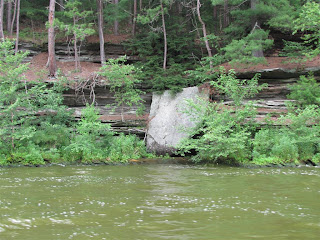 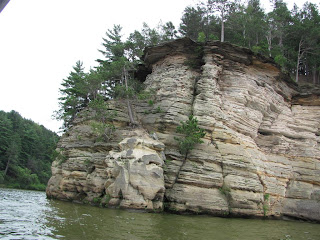 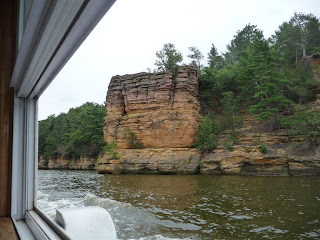 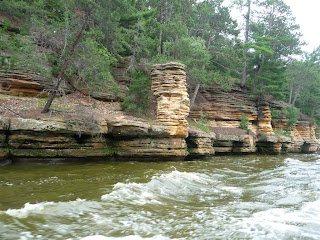 Sandstone formations of the Wisconsin Dells
Our first stop was at a dock in a small bay where we were able to follow a wooden walkway through a narrow gorge carved by a stream running under our feet.  This led to a concession area. We grabbed some food and drink and marveled at the strength of the sandstone, which extended over nothing but air while often holding sizable trees. 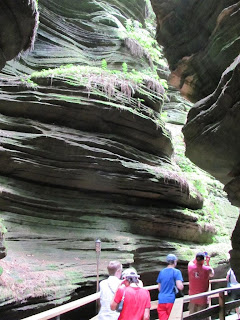 Walking through the gorge 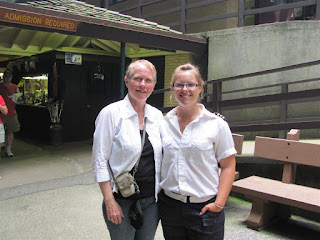 Sandy and guide Claire
Back on the boat, we crossed the river to another dock where we arrayed ourselves to see the famous Jumping Dog leap from a high point across to a rock spire that, in the west, would be called a butte. I didn't get the picture of the actual jump because the camera reacted too slowly.  Or maybe the dog was too fast.  We then climbed to a high point with a lookout and, you guessed it, another concession. 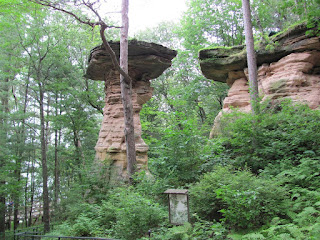 Where the jumping dog jumped
Back at the boat, we started back down the river passing more rocks and more watercraft. 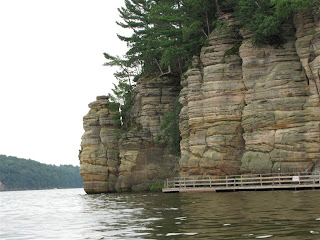 Another formation in the Dells 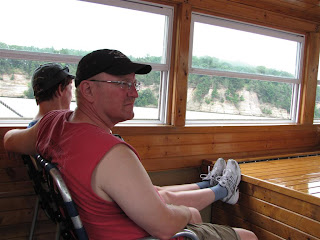 Ron and Laurie enjoying the ride
As we arrived back at the dock, it started to spit rain. By the time we got to the parking lot, the drops were bigger and it was coming down steadily. There were a few claps of thunder as well, so we took cover in a coffee shop where we had some java and snacks while determining that the weather radar feature of the 665 wouldn't work if the unit was not on the bike and connected to the XM antenna. After it let up, we were able to see that I had been right and Madison was getting hit by heavy rain that wasn't supposed to be there until 6:00.

We suited up and headed out. Typically, the rain let up and we started to swelter almost at once. I-90/94 was bumper to bumper. When we finally got onto US 12 southbound, it wasn't much better. At least we found the cause of this backup. Wisconsin 33 meets US 12 near the Baraboo Airport and they plan to have traffic lights there some day. For the time being, there is a three way stop sign and the solid line of vehicles was forced into stop and go mode. Once we cleared this, the traffic flowed along quite nicely.

We stopped in Sauk City at a convenience store for snacks and beer before continuing on to our hotel. The worst rain we got was a bit of drizzle, lucking out because the big cell had moved on to the east just before we got back. Rather than go back out, we ordered some Domino's thin crust pizzas for delivery. They promised 45 minutes to an hour but it ended up taking 1:10. The young delivery man apologized profusely, but the order was just as we asked for it and we forgave him.

Pizza, beer and TV made up the rest of our evening. We had been discussing whether to continue south of the lakes or to follow our original plan and go north. North had been in doubt a few days ago because of the long range weather forecast, but it looked now like it was the better choice and we agreed to head that way. Anamosa and the new boots would have to wait. Our target will be to reach Niagara Falls by Friday.