The weather was looking good this morning. We were set to go at 7:30 but my microphone, as usual, screwed up again. Ron had installed an Autocom system on his Wing and said he still had a stock Honda passenger cord under his seat. It was still there but was tangled up with his Bushtec trailer hitch mount. After some heroic finagling, we got it freed up and I installed it in place of the faulty cord in my fairing. Voila, I could talk reliably again. We found the old cord had been crimped where it had been held in place by the fairing pocket. Thank you, Ron, for going above and beyond to solve my problem.

We were finally rolling at 8:30 under a solid overcast, taking US 18 to Jefferson (Chunk's home) and Wisconsin 26 north to Johnson Creek where we stopped at the Pine Cone Restaurant. We discovered this place while down for Chunk's funeral in October and, since our breakfasts had been lacking so far on this trip, I figured the gang might appreciate it. I had steak, eggs, home fries, toast and coffee for $6.95. Sandy had a 'omelittle' with sausages and a huge muffin. Everyone seemed quite happy with the food and Judy went so far as to label it the best meal of the trip so far. On the way out, Ron got a huge elephant ear pastry and Sandy and I took a 'magic bar' for later. 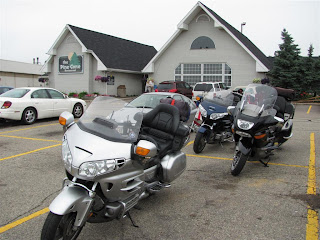 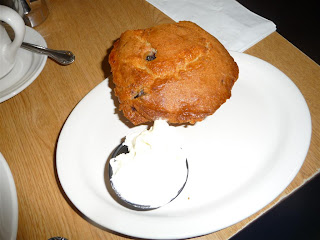 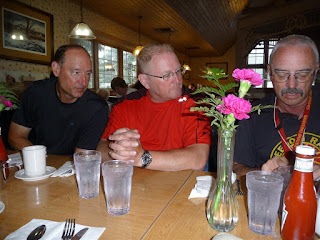 Brad and Ron watch me program the Zumo route
We headed north on Wisconsin 26 and connected with US 151. For a while, the stubborn GPS didn't want to cooperate so we navigated the old fashioned way, by following the highway signs. It was cool and clammy, but we preferred this to the heat and humidity of recent days. Once again, we all agreed that concrete roads and their choppy seams suck. We stopped in Fond Du Lac for gas and the sun came out, driving the humidex up again. Riding north along the east side of Lake Winnebago, we saw some cells to the west but they didn't come close to us. 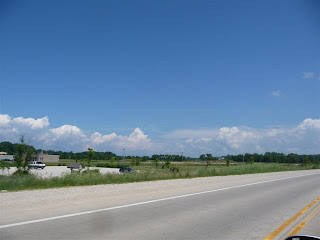 Clouds over Lake Winnebago
Our goal for this leg was Lambeau Field in Green Bay, home of the Green Bay Packers. While I am not a football person, the fans in our midst regarded this with the same awe as I would the Daytona Speedway. We almost didn't make it because Green Bay and its neighboring communities had so many roads closed for construction that the GPS and I almost had simultaneous breakdowns. But, being persistent, we made it in one piece.

Lambeau Field, named for Curley Lambeau (founder, player and first coach of the Packers), is an impressive structure. Next to Curley's statue outside is another of the famed Vince Lombardi. After photo ops, Brad treated the whole crew to admission to the Packers Hall of Fame. It was very nicely laid out and I'm sure, if I was a football fan, I would have been in total awe. As it was, we enjoyed it all the same. 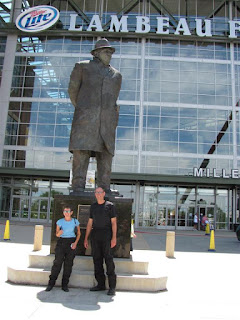 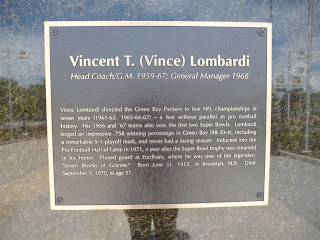 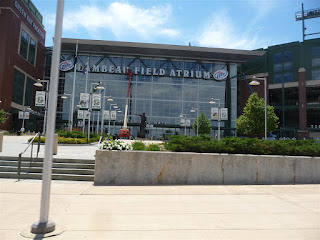 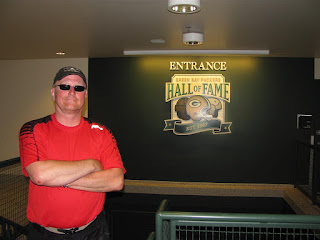 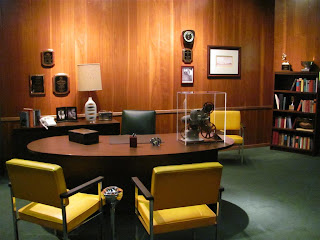 A replica of Vince Lombardi's office
From Lambeau, we stopped next door at a Subway restaurant for lunch. Sandy and I like Subway because it is healthier than other fast food and is cost effective. We split one meal deal, each getting half a sandwich, sharing a drink and each getting our own cookie. 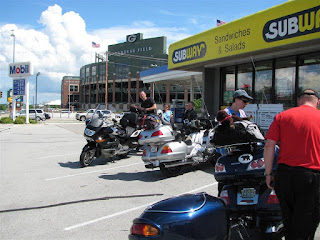 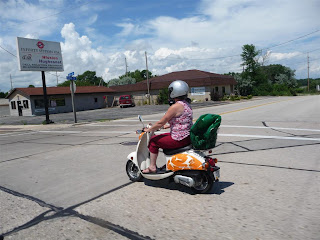 Scooter on Lombardi Avenue - Green Bay Wisconsin
Fed, we rode north on US 41 to the Michigan state line. We stopped at the Welcome Centre in Menominee where the lady was trying to move a pallet of box loads of brochures inside before quitting time. We pitched in and helped her get the job done, hoping to put some more good Karma into our travel bank. She explained to us why we were still in the Central Time Zone. If they placed the dividing line at the state line, it would have caused great confusion for the people who conduct their lives on both sides of the border. We would have to go a few more miles before we were on home time. 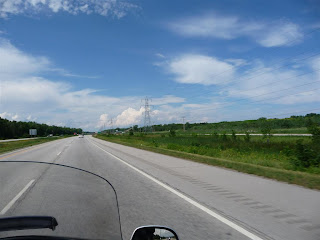 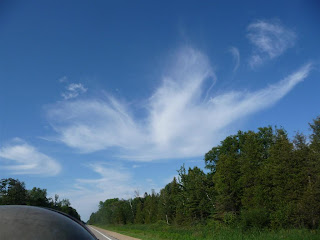 Clouds north of Green Bay Wisconsin
Following Michigan 35, we continued on to Escanaba as the shadows got longer. We saw five deer along the road and one little red car ahead of us almost hit a large Class A RV towing a big trailer that turned left in front of him. The car made a great evasive move to the left shoulder to avoid the collision. Despite the perils, we arrived safely in Escanaba. 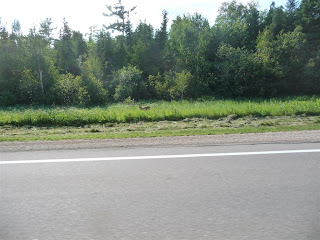 Deer along Michigan 35
Not having a reservation, we tried the Econolodge because it was closer to restaurants than my usual Super 8. Despite an empty parking lot, the desk clerk said they were full. Nothing special going on, just people passing through. A call to the Days Inn gave the same result. The Super 8 had rooms so we ended up at our usual place anyway. We parked on the concrete pad just outside the front door, same as always.

There was a restaurant I didn't know about across the street from the Super 8. The Family Inn was highly recommended by the front desk and closed twenty minutes before we got there. We rode to town instead and ate at the Drifter, where our server Rachel was friendly, efficient and amused us all with her Yooper accent. I had loaded potato skins and a chicken cordon bleu sandwich with fries. Way too many carbs.

On the way back to the hotel, we saw that the traffic lights had been switched to red or amber flashing, a sign that the sidewalks had been rolled up for the night. Back at the room, I found evidence that I had eaten too much when my leather belt broke. Tore right into two pieces. Now I have a shopping quest in the morning and a warning that I need to cut back on my meals.