We got an early start this morning, rolling at 7:29 on the official wandering clock. It was cooler than we have seen in recent days, with the ambient air temperature showing 18C (just about room temperature. This was a welcome relief after the hot, humid mornings we had been experiencing so far. 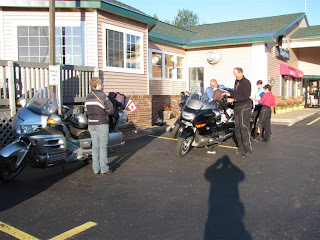 Getting ready - Days Inn - Marquette Michigan
As we headed west on US 41, the temperature even started to drop and, by the time we got to where we were to turn south on Michigan 95, it was down to a chilly 13C so we stopped and some put on another layer of clothes. I was still wearing just a T-shirt and mesh because I knew the chill would be short lived.

Heading south on 95 (also known as the Leif Ericson Highway), we encountered yet one more area where the road was going to be resurfaced. This has been a regular thing all summer as the U.S. government money hits the road, so to speak. It is inconvenient now, but maybe it will make future seasons more enjoyable as broken pavement gives way to smoother surfaces. 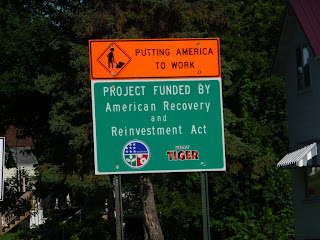 A sign of the times
I had a moment as we stopped at a gas station to fuel up. There were church bells tolling and I made reference to the song Little Jimmy Brown, originally sung by The Bells. I had a version on the MP3 player in the Zumo and, when I connected the headset again, that was exactly what was playing. More strange coincidences that can be taken for positive omens if one were to believe in that sort of thing.

When we crossed the Menominee River into Wisconsin near Iron Mountain, there was a distinctively different feel to the countryside. Greener, more picturesque. It is amazing that this is evident pretty much anywhere along the Michigan/Wisconsin state line. There must have been a lot of Polish settlers in this area based on the road names. 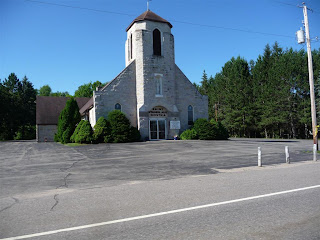 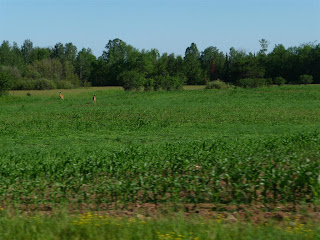 Deer in the cornfield
We stopped at a wayside along Highway 8 to take a break and reprogram the GPS's. A Connie (Kawasaki Concourse) rider pulled in on his way to the COG (Concourse Owners' Group) gathering in Traverse City Michigan. We told him to say Hi to Teri Conrad if she showed up there. 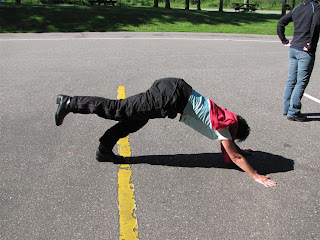 Judy limbering up in the Wayside
Further south, we started to see some weather cells west of us. In the small town of Antigo, we found our first Culver's Frozen Custard Restaurant. Because it was close to lunch time, we had burger food and then Sandy and I split our favourite, a caramel cashew sundae. 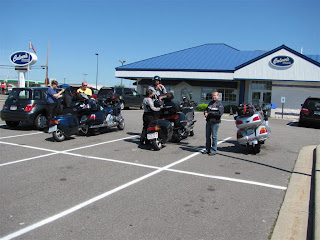 Culver's - Antigo Wisconsin
Continuing south, we encountered a phenomenon that would recur throughout this otherwise pleasant state. We kept meeting Harley riders without helmets who steadfastly refused to wave. I figure they were TCTW. That is Too Cool To Wave. I run into this from time to time, but down here it was so common that I wondered if it was some kind of state conspiracy. I wave to all motorcycles. I also wave to bicycles, construction flagmen, cops and little kids. I guess I am just not cool.

Technically, I was having some difficulties today. My lower right air vent cover kept popping loose, my Butler mug was leaking water all over my jeans and the infernal intercom/CB microphone was again only working intermittently. The mike was particularly annoying since I had replaced both the upper and lower headset cords just prior to leaving. I finally decided that the problem probably lay with the Honda cord from the wiring harness to where the headset cord plugs in and resolved to call RL and order a new one.

We did see a number of signs down here for "rummage sales". I remember when we used to have these when I was a kid. Now, in our part of the world, they are called yard sales.

In Wild Rose, Wisconsin, we stopped at a BP station for fuel and I finally got the air vent cover secured properly. This gas station also sold guns and knives. It looked a bit like what I would expect to see in NRA heaven. Nothing wrong with that from my point of view but it is something you would never see at home. A large group of riders passed through while we were there on a charity ride to raise funds for a lady with cancer.

It was 30C as we continued south, with a few large cells ahead of us. I was taking back roads towards Madison when Ron told me the weather radar display on the new Zumo 665 showed a severe storm about ten miles ahead of us. I turned right on the next road available and we rode west to I-39. This southbound route took us to Madison behind the large and nasty cell, which was moving east and away from us. Without the 665, I would have probably ridden right into it. 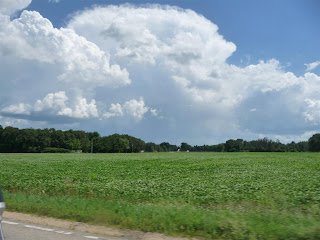 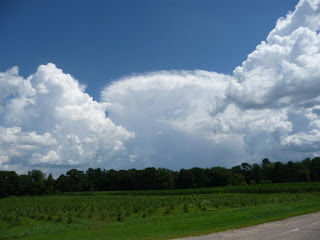 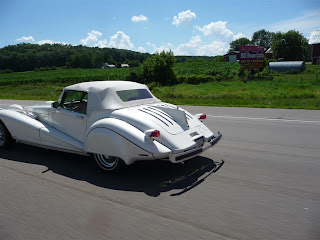 An Excalibur? on I-39 - Wisconsin
At the days Inn, we found the king rooms we had been upgraded to were actually business suites. Talk about good luck. The laundry was also free and on our floor. We walked a little over a half mile to Buffalo Wild Wings for supper, even though our end of Broadway had no sidewalks and we had to get creative. It amazes me the number of pedestrian unfriendly places we have encountered over the last few years. Back at the hotel, we hit the pool but the jets in the spa weren't working. 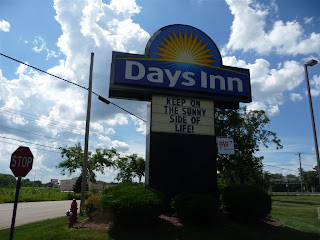 Days Inn - Madison Wisconsin
After getting dried out, we retired to our respective king suites and turned in for the night.