Sandy and I were up at 5:00 AM. The weather for the day looked good, albeit quite hot, according to www.weather.com. However, their new website (listed as a Beta) sucks. Do you hear that, Weather? It's slow and kludgy, probably built by some whiz-bang who wanted lots of bells and whistles while forgetting all I want is quick access to the forecast.

I checked the tires and oil. Yesterday, I compared my dial tire gauge to Brad's and Ron's, thinking that maybe it was reading high and contributing to my tire wear. Mine appeared to be four pounds higher than Brad's mechanical gauge, which was confirmed by Ron's. Lo and behold, this morning my gauge and Brad's were in perfect agreement. Now I am really confused. I guess I am going to have to carry three of my own because a man with two tire gauges never knows what the pressure is. 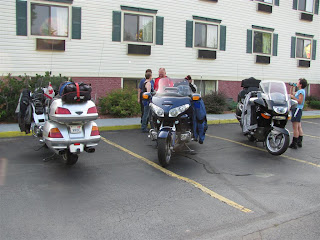 The gang prepares - Super 8 - Massena, NY
We were on the road at 8:00 AM following US 37 past the dead porcupines to Ogdensburg, where we fueled and crossed the steel grate bridge to Canada. No one had any problem with the young man in the Customs booth. 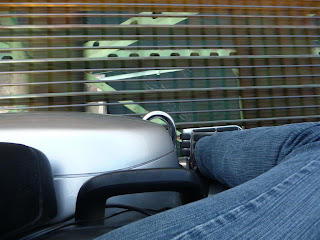 Looking down through the Ogdensburg-Prescott International Bridge
From Prescott, we headed north on various back roads. We went through Smiths Falls, formerly the Chocolate Capital of Canada until Hershey closed the factory and moved production to Mexico. Thanks again, NAFTA. The poor water tower still proclaims the chocolate supremacy. Perhaps they were too depressed to repaint it. In town, we passed Rob Roy's Pub where I had supper on my visit last year, but it was nowhere near meal time yet. 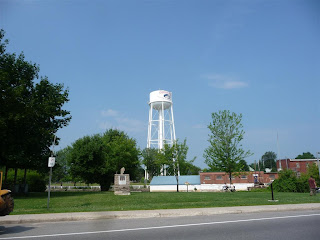 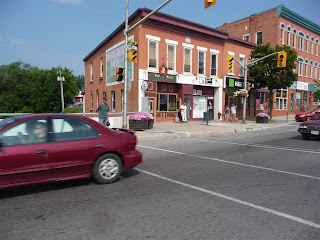 Rob Roy's Pub - Smiths Falls Ontario
We worked our way on to Perth where we stopped at a new style Tim Hortons. Classy but different looking. I almost didn't recognize it. I had the new iced coffee and really liked it. The temperature was starting to get very hot. 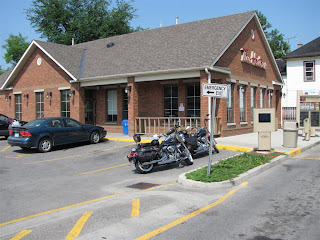 New style Tim Hortons - Perth Ontario
From Perth, we headed northwest taking some of the back roads we discovered in May with Heather and Tom. We motored through Ompah and, in Plevna, found the Freshmart that had eluded us on that trip. This appears to be the cultural centre of the area, with the grocery store augmented by a licenced restaurant, gas pumps and a mini-putt. By this time, the temperature was pushing 35C and we took time out for some cold drinks. 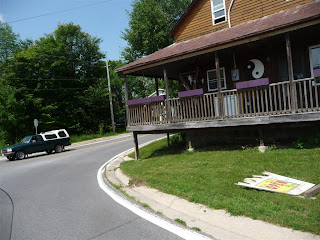 Not a lot of clearance 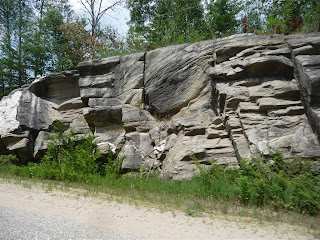 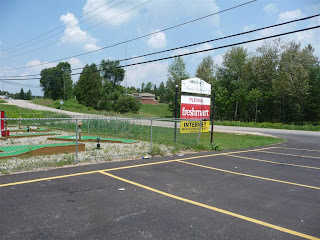 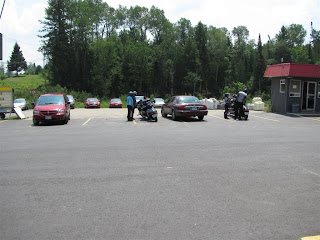 Hanging out in the Freshmart parking lot
The next stop was at Mapleton House, where we had lunch. The lady running the place remembered Sandy and I from the Victoria Day weekend. 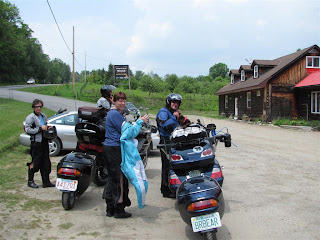 Mapleton House
After lunch, we followed 514 and 515 to Combermere and went on up Highway 62 to Barry's Bay where we stopped for fuel. While we were there, several Harley's rolled in with one rider wearing a full Red and White patch. I think more were members, but were trying to beat the heat by dressing light. We talked to one of the guys and found they were headed for his camp in Bancroft.

Continuing on, we rode west on Highway 60 into Algonquin Park. I think our fellow travelers were impressed to see a provincial park the size of Delaware. We stopped at the Two Rivers Store to have some ice cream. This is where our first misadventure happened. Brad used the electric centre stand to raise the BMW onto two feet. Unfortunately, there was a bit of a washout under one leg and the bike, complete with Uni-Go trailer, toppled over while we were eating. The right mirror was damaged and the trailer was scuffed more than what would buff out, but it was OK mechanically. I hate when that happens. 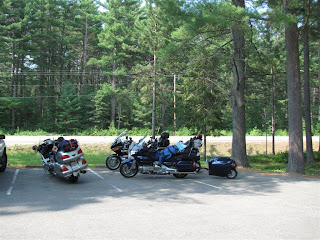 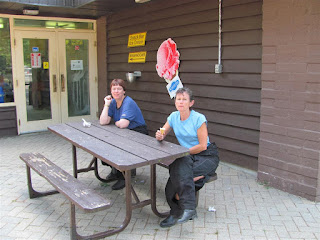 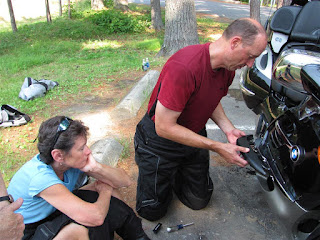 Brad fixing BMW parts after the fall
Continuing on the Huntsville, we arrived without further mishap. In town, we cruised the strip looking at motels. I made an arbitrary decision and we got rooms at the King William Inn. After settling in, we walked down to the Family Restaurant and Pizza place. It seems they aren't really very good at making pizza because the crust was doughy. On the plus side, it was food. Back at the motel, I sat outside and talked to a couple from Mississauga who left their BMW at home and brought their air conditioned car north for a few days.

We decided we would ride to Sudbury tomorrow and spend the night at our place. Then we turned in for the night.

Water towers, Mapleton House, tipped over motorcycles! Sounds like my kind of a trip. And it looks like everyone's having a good time despite some minor setbacks.