The annual July Wander with Bother Bear & Laurie from New Hampshire and Brad & Judy from Massachusetts got underway today. We had originally thought about a trip to the Outer Banks but, due to high temperatures and the fact that there would be crowds, we changed our plans. Instead, we planned to meet them this evening in Massena, New York and ride Ontario, Michigan and Wisconsin for a couple of weeks.

By 7:40, we were packed and ready to roll out of our driveway. The forecast yesterday called for thunderstorms today but, by this morning, the weatherman had changed his mind. No surprise there. There was a squall line across the Soo but we were going the other way.

I had changed the oil on the bike yesterday. I had to charge the battery as well because, the day before, I had turned the key to the accessory position to check the mileage and left it on overnight. It took a charge from the 2 AH charger before the battery tender could start working. I am a little concerned about the latest Bridgestone rear tire because it is wearing faster than the other Stones I have had on the back. I have no idea why unless they changed the rubber compound. In any case, I will watch it closely.

We headed east on Highway 17, stopping in North Bay and again in Mattawa. There, I had a Subway bacon omelet breakfast sandwich, a first for me. It was tasty and filling. 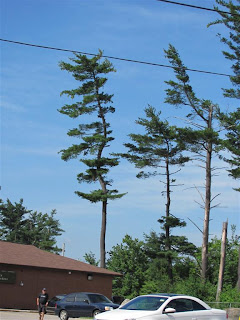 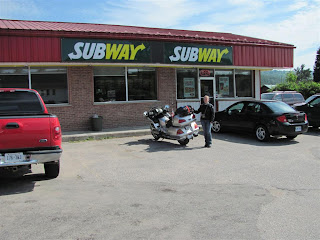 Subway in Mattawa, Ontario
The Ontario government just introduced the Harmonized Sales Tax (HST) on July 1st. The first tangible effect we saw was an immediate increase in the pump price of gas, which went up by 8% as the Provincial Sales Tax was added. Gas was now $1.07/liter in Sudbury. I was surprised to see that the pump price in Deep River was only $1.017/liter.

Before Arnprior, we got stuck in 35C heat in a line backed up due to construction. We were barely moving and it looked like the line stretched for several miles, so I made a U-turn and went back to catch a side road that would take us by the jam. 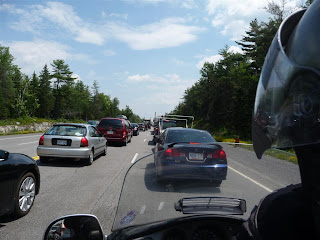 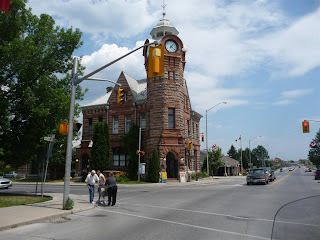 Arnprior museum
In Arnprior, we had lunch at PJ's Restaurant. Sandy and I split a chicken salad pita, fries and a salad. Continuing east, we saw storm cells building over Ottawa but, as soon as we turned south on 416, the skies cleared. With the high temperatures, this was not necessarily a good thing.

In Prescott, they have a bridge that goes over the St. Lawrence River to Ogdensburg, New York. It is almost a mile long, two lane and has a steel grate surface. After crossing this in the rain and gusting crosswinds years ago, I swore I would never cross again. This time, the decking was dry and I have improved my skills so it was no big deal. Until I got the the US Border Services. 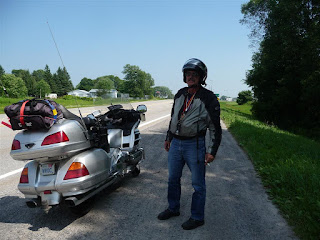 Getting ready to cross the bridge to Ogdensburg, New York
It seems that guy with my name who is on the wanted list in the US is still out there. After explaining I wasn't James L Robinson and pointing out that I did not share some key distinguishing features with him, I got invited into secondary inspection again. Sandy had to come with me. A pleasant grey haired lady agent asked a whole series of questions, even though the answers to all of them were in their NEXUS database. Makes me wonder why I got the card. After 45 minutes of searching the computers, she released us from the Group W Bench and allowed us to enter the country.

We rode the 30 miles across Highway 37 to Massena. In one five mile stretch, we passed four dead porcupines in the road. This must be some kind of record. We arrived at the Super 8 at 4:55, ahead of the New Englanders. 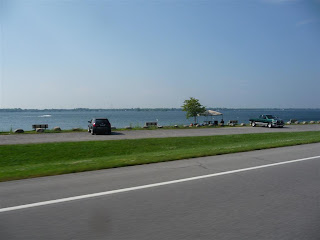 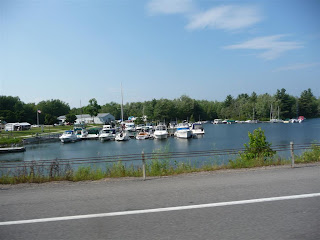 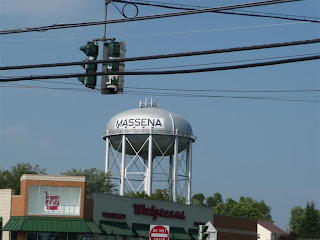 Massena at last
We talked to a Pennsylvania couple on an '08 Wing while we were waiting. Then the rest of the gang arrived about 6:45. After getting checked in, we all walked across the street to the A#1 King's Buffet for some Chinese food. No one stayed up late. 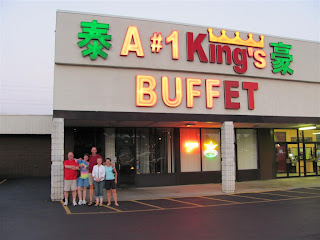 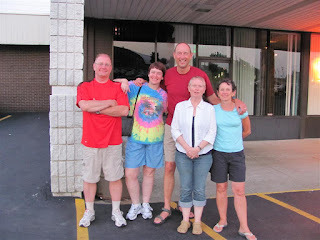 Bob has difficulty coming into the States from Canada too. His name brings up a red flag. We're usually delayed 15-30 minutes while they look at the computer and his passport.