Ron volunteered to lead today. Although there was fog this morning, most of it had dissipated by the time we left at 8:50: We headed east on Michigan 72 towards the Lake Huron shore. About an hour out, near the lake, we detoured a couple of miles to a BP station/market in Lincoln for a bathroom break.

I was amused by two older gentlemen talking outside the market. A pretty young lady in form fitting leisure pants walked out and, as one man noticed, he abandoned the conversation to watch her. Finding himself alone, the second looked and then watched as well. After she got into her car, they picked the conversation back up right where they had left off.  Down the road, things like this might be the high point of my day.

In Harrisonville, we followed the GPS to what we thought was access to a lakeside park. Instead, we ended up in a gated dead end that provided a service entrance for a small state park. Sometimes the GPS can lead you astray.

We followed the shore south on US 23. The Huron shore is busy with many motels, cottages and condos. Many of them appear to be booked well ahead because the No on the Vacancy signs is often painted there. About lunch time, we consulted the Garmins for recommendations on where to get a bite. They suggested Poppy's Diner, a short ways down the road on the left. I don't know if the diner closed and totally disappeared from existence like Brigadoon or whether the GPS was fed bad data, but there was no sign that there had ever been an establishment at the indicated location. Luckily, a short way down in AuGres, we found Dunleavy's Eatery & Pub. In addition to traditional Irish fare, they had some Mexican offerings on the menu. I had a 1/2 pound patty melt on marble rye bread with fries. It was excellent but I should have split it with Sandy. I guess I will never learn. 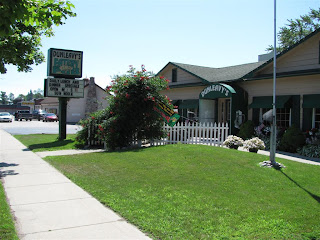 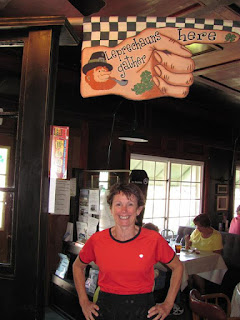 We brought our own leprechaun
Going through Bay City rather than taking the Interstate around it wasn't the best idea. The traffic was busy and the broken concrete streets were atrocious. We were relieved to finally reach the open country on the other side. Sometimes the big roads are best.

After a detour for construction, we were heading east on Michigan 46 when the call went out for an ice cream stop. We were in open country and the GPS said there was nothing in the immediate area, but we soon arrived at a crossroads and found Scott's Quick Stop. The ice cream cone on the end of the building led us to believe this was the spot and we were right. In addition to every imaginable type of firearm hanging on the wall for sale, they served huge ice cream cones. While I talked to a local couple with an '08 silver GoldWing and we compared travel notes, Sandy got a 'baby' ice cream cone. I'd hate to see a large one. 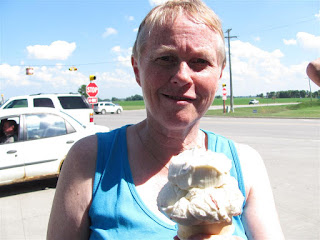 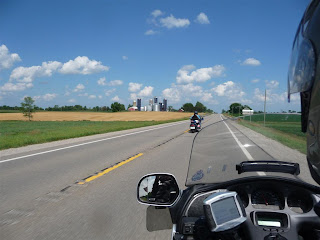 Following Ron along Michigan highways
Again at the Huron shore, we rode south to Port Huron where we fought our way through rush hour traffic to the Comfort Inn. The rooms were a reasonable $71 and they had a 24 hour pool and spa. This was a first. Sandy had a problem with our two queen room because it faced the canal and the boat horns were quite loud. In addition, the air conditioner rattled. Unfortunately, they didn't have any regular rooms on the front side. Fortunately, they upgraded us to a king room with a large Jacuzzi tub. They said that they often upgrade Choice members free if the rooms are available. This room was normally $109 during the week and $189 on the weekends. I will have to ask for upgrades from now on. 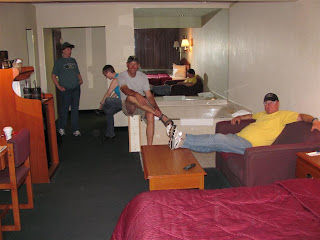 Our upgraded Jacuzzi room - Comfort Inn - Port Huron Michigan
In the parking lot, we met two guys from Diamond Air in London. They were on their way to Oshkosh, Wisconsin for the massive air show to promote their aircraft. I didn't know that Diamond was the second largest manufacturer of piston aircraft in the world. Unfortunately, their coach (which was to serve as their office/hospitality suite at the show) broke down on the Bluewater Bridge and they were trying to work out contingency plans for the show.

We walked across the street to Bob Evans for supper. Sandy and Judy split a meal this time while I had a Texas brisket sandwich with chili. It was good but it wasn't Texas. Outside, I met two older gentlemen from Dallas heading for Bala, Ontario. They were surprised I knew where it was.

Back at the room, Sandy and I retired and enjoyed the Jacuzzi tub for a while before turning in.