Mom left instruction that, when she passed on, there was to be no service. She requested that, at a later date, we could bury her ashes in the family plot with our Dad and brother Doug. The only specific request she had was that John and Jesse (who is brilliant on the violin) play Amazing Grace. We were very pleased and grateful that they made the long trek from London to honour her last wish.

We planned a graveside gathering for 2:00 PM and invited close friends and family. In addition to Heather, Kim, Mike and Jolene made the trek from Cambridge coming up the American side and arriving not long before we were ready to head to the cemetery. Heather's husband Tom wanted to come but couldn't because of a personal commitment back in Waterloo.

Leo rode down from Sudbury and stopped by to pay his respects. Good thing he did because I needed his new high tech tie down straps to secure the container with Mom's ashes to the rear seat of the GoldWing. Mine weren't long enough. Mom always enjoyed her annual ride and we figured she would approve of traveling this way for her final ride. 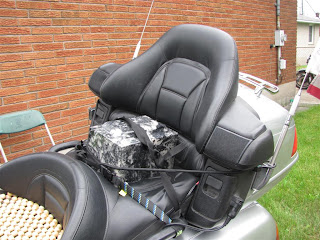 Mom ready for her final ride
Just as we got ready to leave for the cemetery, the rain that the radar had been showing arrived. Typical. The procession went down Second Line and up People's Road to Greenwood where we met Lisa and her assistant from the funeral home under the awning in front of the chapel. I was concerned about the violin and guitar in the rain and Randy, the cemetery staff guy, opened the chapel so we could have the service inside.

Dave and I spoke of our memories of Mom and then John and Jesse played a beautiful rendition of Amazing Grace. Then friends got up to share their memories and Heather spoke on behalf of herself and Kim. It was short, sweet and I think Mom would have liked it. 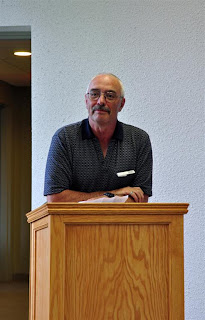 Me saying some words
(Photo by Dave Gray) 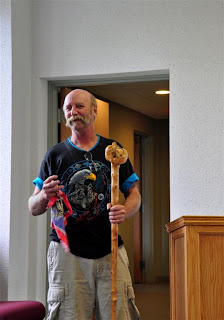 Dave with the big stick
(Photo by Dave Gray) 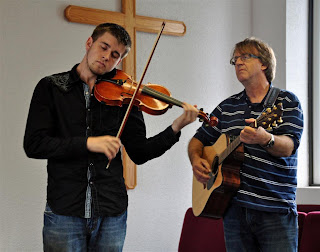 Jesse and John playing Amazing Grace
(Photo by Dave Gray)
When it was over, I put Mom back on the bike and we proceeded out to the grave site where we have everyone a chance to say goodbye before I placed her ashes in the ground. Dave added a Crown Royal bag with Mom's teeth, glasses, some whiskey and some cigarettes and then we each placed a shovelful of earth over the container. Not one to leave a job half done, Dave finished filling in the hole. Afterwards, we invited all assembled to join us back at the house. 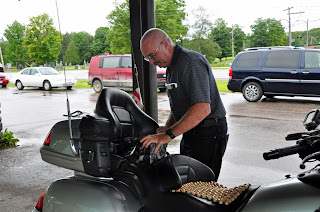 Me strapping Mom back on the bike
(Photo by Dave Gray) 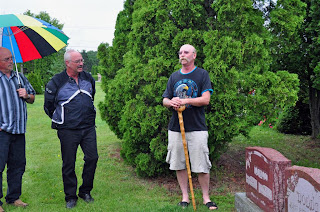 Vince, me and Dave waiting for the multitude to assemble
(Photo by Dave Gray) 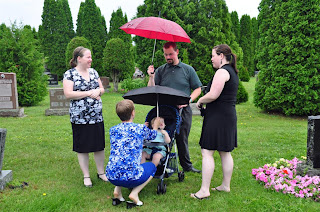 My clan
(Photo by Dave Gray) 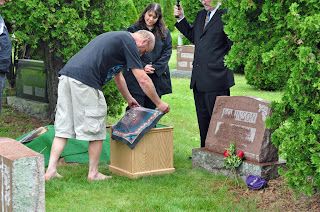 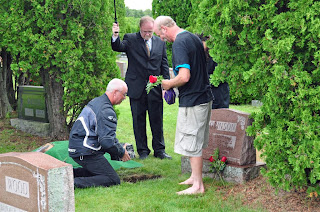 Getting ready to place Mom in her final resting place
(Photo by Dave Gray)
Back at the house, we reminisced among good friends as we ate and drank. As the sun went down, John and Jesse jammed a bit for us. I know someday soon we will be able to say we knew Jesse "back when". 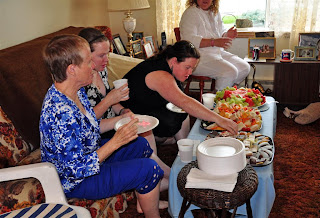 Sandy, Kim & Heather with some of the food
(Photo by Dave Gray) 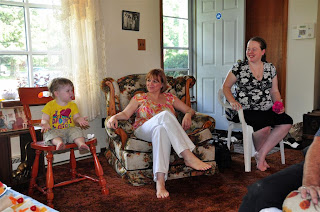 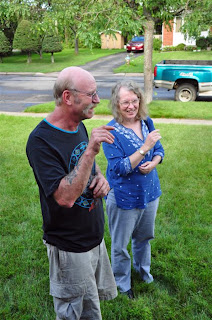 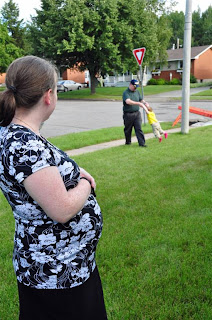 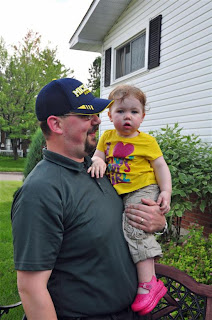 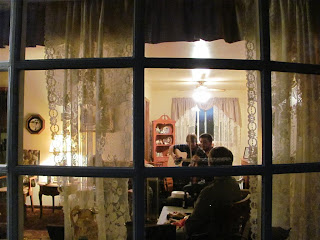 Looking in from the outside 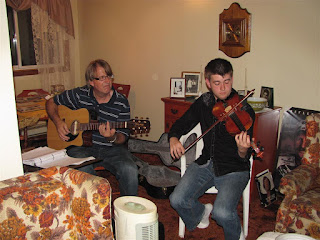 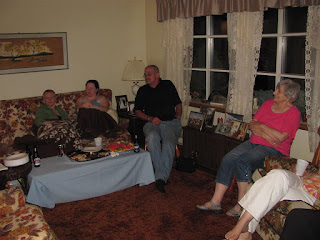 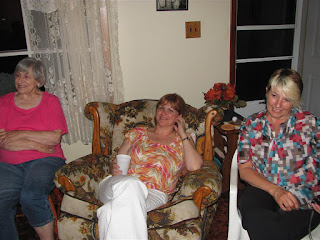 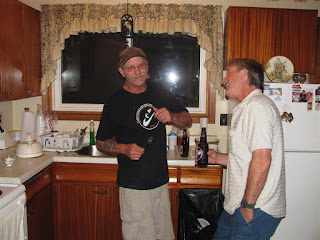 Two Daves
The Dash
by Linda Ellis
I read of a man who stood to speak
at the funeral of a friend.
He referred to the dates on her tombstone
from the beginning...to the end.
He noted that first came the date of her birth
and spoke of the following date with tears,
but he said what mattered most of all
was the dash between those years.
For that dash represents all the time
that she spent alive on earth...
and now only those who loved her
know what that little line is worth. 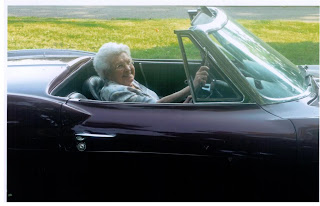